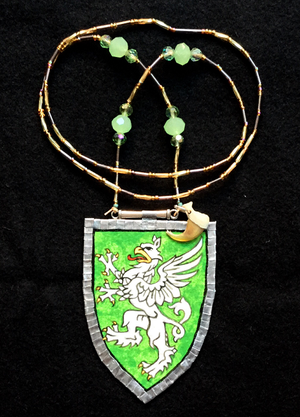 A Homefire Guardian in the form of a medallion.

These items often take the form of chains of orichalcum and gold, from which hangs an oval medallion inlaid with tempest jade. They are often used by Marcher aldermen to bolster their defences, allowing traders and artisans to fight alongside trained bill fighters.

In other parts of the Empire, they are often called Homefire Guardians and are used to allow civilians to protect their homes from invaders. These items more commonly take the form of simple rings or bracers of orichalcum and gold, inlaid with tempest jade in the form of symbols of vigilance (such as geese in Varushka), runes such as Ophis, Feresh or Jotra, or heraldic beasts such as gryphons.

Sir Orly squared his shoulders and held his spine as straight as possible while balancing on the slick surface of the fallen log. Lady Gwendoline couldn't see it, but his cheeks were flushed red with embarrassment beneath his visored helm. He'd never expected her to come here. In his wildest fantasies, perhaps, she'd finally given some sign of returning his ardour; maybe a silk scarf or a lock of her golden hair as a sign of favour, but he'd never expected to see her here in this dank marsh.

She smiled, and it was a smile that could melt a pound of butter in midwinter. "It's Sir Orly, isn't it?"

She twirled a delicate finger through the necklace of green stones that spilled down over her generous bosom - the same sparkling green as her eyes, he noted. "Oh, come now, Sir Orly." she admonished, "This is the test the Earl set for our marriage, is it not? Shouldn't I take an interest in a potential suitor?"

"On my honour, he made me swear to guard this bridge against all comers for three days, my lady. I've sent sir Dregan and a few village boys packing already. By morning I'll have completed the task. Not that it's a burden, or anything..." He looked at his feet, blushing once more.

She seemed to choose her next words carefully. "Orly, that's very sweet, but you might have done well to ask me first. The truth is that I already have a lover, and no interest in marriage besides."

This was all wrong! She was a sweet, virginal bloom, a tender young maiden. She couldn't be saying these words. "Who?" he snarled. "I'll gut him, I'll have his head, I'll eat his heart for breakfast!"

She smiled serenely again as she casually foraged a fallen branch from the bushes by the side of the stream, "You probably would, too, wouldn't you? Quite good at violence by all accounts. Dregan still hasn't woken up from that beating you gave him. Very well, my hero - come here and receive my embrace."

His instincts were telling him that something was wrong, but his passion overwhelmed them and he move forwards, arms outstretched for the kiss he'd been yearning for so long. Suddenly her arms whipped the heavy branch around with all the speed and skill of a trained warrior, striking him full in the side of the helm with a sickening crunch. For second he swayed, then collapsed towards the foaming stream. At the last instant he managed to get one hand into a knothole on the log's surface, although it almost wrenched his arm from its socket. He looked up as she stepped daintily along the log until she was above his hand.

"Not in this lifetime, I'm afraid, Orly" she said as she brought the branch down on his fingers with all her strength.

Later that night as Lady Gwendoline celebrated her freedom, her lover handed her a glass of wine and asked "Did the jewels you asked for bring you pleasure, my lady?"

Gwendoline laughed lustily, "My dear Signeura, you have no idea..."
Retrieved from "https://www.profounddecisions.co.uk/mediawiki-public/index.php?title=Alderman%27s_Edge&oldid=51242"