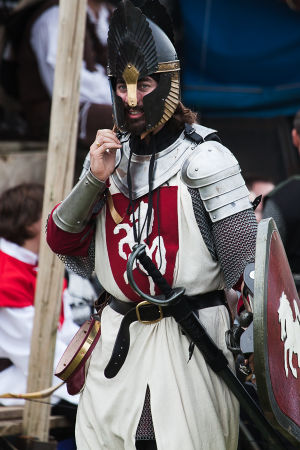 The most common group of Highborn guardians who wear this mithril plate armour are the protectors of the Necropolis. The armour forged in that shrouded city is often hallowed by priests of Vigilance even when it is worn by guardians from other chapters. According to popular belief, when the armour is used dead spirits who have yet to pass into the labyrinth of ages are drawn to the wearer and offer a little of their essence to revitalise him in whatever battle he is engaged.

Building on these legends, the Imperial Orcs call this armour a shaman's beacon. They claim that when they call on the revitalizing energy bound into the armour their renewed energy comes from their ancestors, and they often hear them more clearly than normal when they evoke its power.

Outside of Highguard, the tombsteel guardian is as likely to be mithril chain as it is mithril plate, and occasionally it is made of heavy segmented leather finished with ambergelt resin and carefully inlaid with weltsilver. Scouts, spies, merchants and other people who must often operate by themselves for long periods of time favour this armour because it provides vital healing when a situation turns unexpectedly deadly.

"You'll have plenty of time to sleep when you're dead. Until then, on your feet, soldier!"
Retrieved from "https://www.profounddecisions.co.uk/mediawiki-public/index.php?title=Tombsteel_Guardian&oldid=50995"