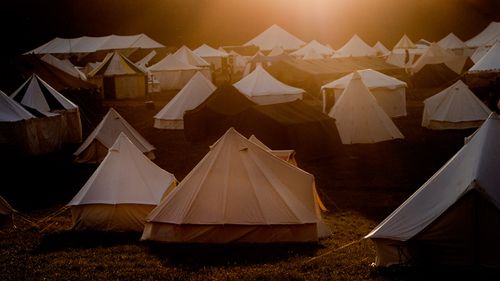 Twilight settles over Anvil as the night draws in. Winter is near.

Downtime will be open shortly, allowing players to process their character's downtime choices. The Winter Solstice winds of fortune will come out shortly before the next event (which is TBC to TBC). However, there are a number of significant events happening in the wake of the Autumn Equinox that may affect some players' Downtime actions - primarily effects on personal resources or options for characters with military unit or fleet personal resources.

On this page we'll be outlining, and offering some context for, these various effects on this page. In each case, there will be further information in the Winter Solstice Winds of Fortune. As always, these are quick OOC summaries to explain effects such as large-scale enchantments and curses. We'll cover all these and more when we start to present the Winds of Fortune for next event.

Thanks to the mandate proposed by Sariel and endorsed by the Assembly of Nine, it is clear that it is acceptable to trade liao to the Axou. This increases the amount of money gained for selling liao via a congregation from 18 rings to a full crown, and also provides money for the Imperial treasury due to increased tariffs from Axou trading vessels.

The Temple of Balo and the Black Bull has been claimed by the Grendel in their conquest of Feroz. Any benefit that Imperial traders gained from that symbol of cooperation has been lost to the orcs of the Broken Shore.

The Chambers of Issyk has been opened to Imperial traders, and so another port has been made available for fleet owners. Due to the nature of the fleets that previously docked at Issyk, and the longstanding arrangement with the Principalities of Jarm and the Sarcophan Delves, the Empire's traders are suffering under the bureaucracy of the citadel's Ilarchs.

Thanks to the mandate raised by Yarona of the Chantry and endorsed by the Highborn assembly, a greater understanding is sought between the priests of Highguard and the troubadours of Dawn.

In line with the mandate raised by Lina of Felix's Watch and endorsed by the Highborn assembly, the business owners of Highguard are encouraged to provide support for the project to purify the waters of Holberg, fouled by the curse that devastated the gardens there.

TBC mandates were successfully upheld in the Imperial Synod, and enacted by named priests. As per our recent update, all mandates have automatically been enacted as long as the named priest has sufficient liao in their inventory before Downtime opens.

Some mandates were upheld by their respective assemblies but failed due to the intervention of the Wisdom assembly and the sword scholars. Judgement 7 (encourage Imperial citizens to find opportunities for cooperation with the eternals), Judgement 17 (encourage citizens to travel to Zenith and offer aid there), and Judgement 52 (encourage Marcher pilgrims to make a pilgrimage to Holberg) were all ineffective as a consequence.

No rituals were added to Imperial lore during the Autumn Equinox.

Several rituals were added to Urizen lore during the Autumn Equinox. Details are forthcoming.