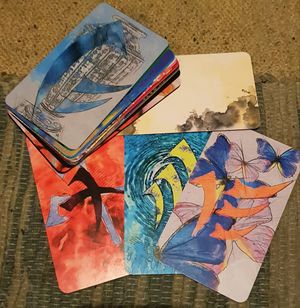 The skein of fate twists and bends

Downtime will be open shortly, allowing players to process their character's downtime choices. The Spring Equinox winds of fortune will come out shortly before the next event. However, there are a number of significant events happening in the wake of the Winter Solstice that may affect some players' Downtime actions - primarily effects on personal resources or options for characters with military unit or fleet personal resources.

On this page we'll be outlining, and offering some context for, these various effects. In each case, there will be further information in the Spring Equinox Winds of Fortune. As always, these are quick OOC summaries to explain effects such as large-scale enchantments and curses. We'll cover all these and more when we start to present the Winds of Fortune for next event.

Downtime is due to close at midnight on the 8th of May.

Thanks to the influence of the Three Watchers, any Highborn character who owns a military unit can upgrade their resource for one wain of mithril less than normal. The reduced cost will appear automatically in your downtime options. A military unit can only be upgraded once each season, but they could, potentially, be upgraded every season, saving one mithril each time. This opportunity remains until the start of the Autumn Equinox 384YE.

Pride of the Raiders

Following the raid against the Pride of Ikka's Tears, Rafe proposed a mandate that was endorsed by the Wintermark National Assembly. As a consequence, every Wintermark military unit that took part in the expedition receives a boost in courage and morale equivalent to two additional ranks for the next two seasons (until the start of the Spring Equinox 384YE).

Thanks to the mandate of Ranae deRondell, for the next year (until the start of the Winter Solstice 384YE) any Dawnish military unit that supports a Dawnish, Highborn or Navarr army that is engaged in Dark Ranging will gain additional rewards - one additional crown and two random herbs. You can learn more about this in the virtue of sharing wind of fortune.

The military units who took part in the campaigns to Protect Hercynia and Protect Therunin following the Autumn Equinox are still recovering from the experience. Combatants in Hercynia see a two-rank penalty, while those who fought in Therunin suffer a one-rank penalty. The effect remains until the start of the Summer Solstice.

In addition to the normal downtime options available to a military unit, the following special opportunity is available.

There are several options related to the effort to solidify Imperial control over Ossium, in Varushka. Any military captain can choose to take part in one of these actions:

Anyone who supports one of these actions is also contributing to the to overall success of the mission to secure greater control of Ossium. You can learn more about this opportunity in the beyond the light wind of fortune.

Certain trading destinations apply special effects. You can learn more about the Empire's foreign relations in the recent all at sea wind of fortune.

While Imperial ships can trade freely with Kantor, there are still problems on the docks at Issyk. The Chambers of Issyk has been opened to Imperial traders, but due to the nature of the fleets that previously docked at Issyk, and the longstanding arrangement the Axou here have with the Principalities of Jarm and the Sarcophan Delves, the Empire's traders are suffering under the bureaucracy of the citadel's Ilarchs.

Trade with the Commonwealth

Trade with the Iron Confederacy

The ports of Kavor and Vezak are closed to Imperial ships. As such the Empire cannot trade directly with the Principalities of Jarm.

The concedence of the Alivetti estates has greatly improved the enthusiasm of Sarcophan merchants - strengthening even further the bonds of trade. As such every fleet captain that trades with the Delves receives an additional dose of Marrowort and an additional dose of Imperial Roseweald in addition to the normal production.

In addition to the normal downtime options available to a fleet captain, the following special opportunity is available:

Provide passage out of Axos

Following the Winter Solstice, Skywise Gralka of the Imperial orcs enacted a mandate to encourage fleet captains to liberate the orcs of Axos. Imperial fleet captains can select the "Provide passage out of Axos" action from the independent action downtime dropdown. If sufficient force is provided, the Empire will be able to bring a large number of former Axou orc slaves back to Imperial territory. A fleet that participates does not receive the normal production for independent action: a standard fleet instead receives 1 measure of beggar's lye, 1 ingot of orichalcum, 1 ingot of tempest jade, 1 crystal mana, and luxury goods worth 12 rings; higher or lower rank fleets will receive commensurately more or less.

You can learn more about the opportunity in the Written in salt wind of fortune.

Following the investigations of the Silent Bell into the Heirs of Terunael and the followers of Yaw'nagrah, the Imperial Senate has instructed the magistrates to take action. Magistrates and militia are proactively seeking out and those guilty of idolatry, but in doing so they are disrupting the lives of a great many Imperial citizens. As a consequence, every mana site in the Empire is seeing a reduction of one crystal mana.

Thanks to the mandate raised by Yarona of the Chantry and endorsed by the Highborn assembly, a greater understanding is sought between the priests of Highguard and the troubadours of Dawn.

29 mandates were successfully upheld in the Imperial Synod, and enacted by named priests. As per our recent update, all mandates have automatically been enacted as long as the named priest has sufficient liao in their inventory before Downtime opens.

Some mandates were upheld by their respective assemblies but should have failed due to the intervention of the Wisdom assembly and the sword scholars. The pilgrimage in the name of Imperatrix Lisabetta, however, focused on matters of the spirit and temporarily countered this effect. The following mandates would have failed without it:

Three rituals were added to Imperial lore during the Winter Solstice.

A number of rituals were added to Urizen lore during the Winter Solstice. Further details can be found in the some heavenly music wind of fortune.