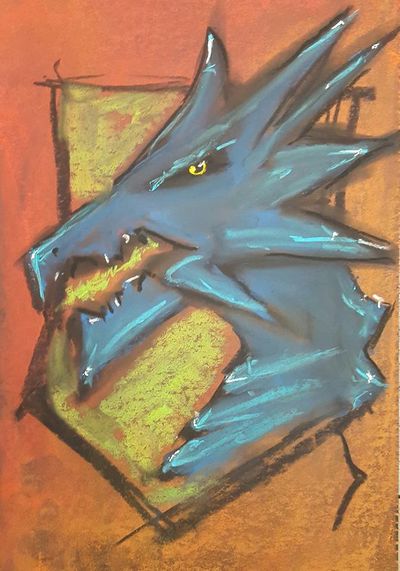 In the Empire, very little is known about King Adamant. In one Jarmish text, he is depicted as a titanesque man with skin of white granite – like a living statue - seated on a throne, crowned, in vestments of mithril. In another, more fanciful image, he is depicted as a dragon with skin of gold, his scales encrusted with brilliant gemstones. Some scholars who have managed to speak to his koboldi describe him as a great stone face that appears on the wall of an immense throne room.

He is said to be the king of a subterranean nation inhabited by short, stocky servitors who are incredible stonemasons and miners - the koboldi. These servants plumb the depths of the earth for gemstones and precious metal which they craft into beautiful forms as gifts for Sharaz. They are also sometimes sent to aid other Eternals, or even evoked by mortals, to help in the creation of great, enduring works of stone especially fortifications.

Adamant is strongly connected to the enduring nature of the Summer realm. One Jarmish text refers to him as a consort, child or rival of Cathan Canae, but it is not clear if there is any actual relationship. Adamant also embodies the resonance of majesty - he encourages mortals to build immense, inspiring structures and beautiful, glittering jewels with equal gusto; to delve deep into the earth to uncover the treasures hidden there; and to do everything on an immense, awe-inspiring scale.

It is not clear what has sparked his current interest in the Empire, but the first recorded appearance of his koboldi came during the Winter Solstice 379YE when a koboldi workforce appeared to help deal with accursed damage to the Castle of Thorns. The koboldi have been seen several times since - on the field at Anvil, and helping to maintain the Court of the White Fountain in the face of a malign curse.