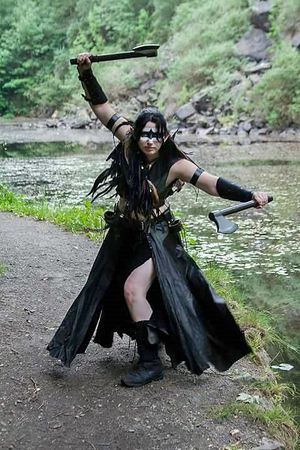 In the hands of a skilled warrior these hatchets devastate enemy
weapons and shields.

Often crafted in the form of two one-handed axes, these destructive weapons are equally effective at tearing a shield apart and smashing the haft of a pike or polearm. Kallavesi artisans devised these blades to allow warriors to mimic more closely great predatory beasts and thus more readily draw upon their power and courage. Although Bear Claws are the common styles, others are known as Wolf Claws, Eagle Claws or even Boar Tusks and are usually wielded with the appropriate mask.

These weapons are also popular in Varushka, where their power to splinter wood is appreciated in logging as well as in battle. Known as Felling Hatchets, bearing these weapons is sometimes seen as a sign that the wielder intends to battle human or at least human-like foes who carry weapons and shields, rather than wolves or animals.

They are a popular weapon with a certain foreign nation, where they are often crafted as sickles or curved swords and called Twin Moon Blades.

To beat bloody that bold and brutal bear,

Their crude cleavers its crushing claws did crumble,

And with spirited swipes their skin and substance sever,

Only one ogre outlasted the onslaught to overwhelm,

And fell the fiercest foe found in frozen forests,

It stooped to skin the savage and in surprise it saw,

The hide a human hid, her heart that hairy hunter had haunted,

Its deepest daring drawn and damage dealt til death descended.

~ Excerpt from the Poems of the Scop Rakel Skein-spinner