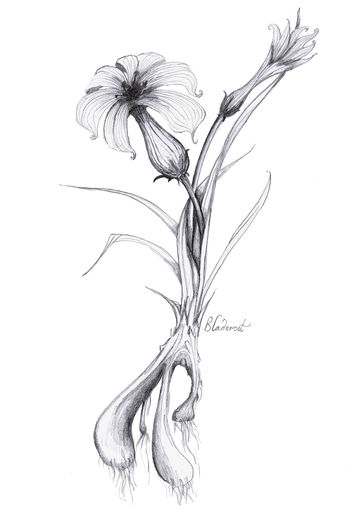 This perennial flowering plant grows most commonly in cold environments, and is often called frost narcissus. The plant itself flowers briefly in late Winter/early Spring and is almost unique in that its flowers are grey in colouration - a ring of six circular petals around a darker inner trumpet. The woody bulb of the bladeroot is noticeably elongated compared to that of similar plants earning it the name Irremaisahne among the Suaq hunters due to its similarity to the Winterfolk Rune of Wisdom.

Applied by a physician, bladeroot removes weakness, and may even be used to treat some minor curses and maledictions. It also sees some us in the treatment of illnesses that affect the mind or the spirit, rather than the blood or the body. While Imperial roseweald is efficacious at treating sickness in the blood, bladeroot is effective at treating imbalances and illness caused or carried by the other "juices of the body" including saliva, stomach acids, bile, phlegm, and the like.

Bladeroot is especially useful to Navarr physicians, and to those who live near to areas infested by the vallorn. An infusion of the herb is used to treat an unpleasant affliction called green lung - an illness caused by exposure to the foul air that characterises areas infested by the vallorn. Characterised by excessive production of phlegm, left untreated it can result in significant damage to the lungs, permanent breathing difficulty, and eventually death.

Bladeroot favours cold, dry conditions and is said to grow most freely over the graves of lovers. In art and literature is closely associated with premature death. It grows well in Wintermark (outside of Kallavesa, Varushka, Skarsind and Hercynia, and less well along the southern coast - especially in the Brass Coast, Sarvos, and parts of Highguard. Outside of the Empire it grows well in the eastern Commonwealth and, if rumour is to be believed, in Otkodov to the north.

The root is mildly toxic, causing nausea, vomiting and dizziness if consumed raw. Properly prepared, these negative side effects pass quickly. Some malicious individuals work to concentrate these properties, producing a poison that causes crippling stomach pains, diarrhoea, excessive thirst, and even death. As with many such natural poisons, it can be treated with a simple incantation or a preparation of marrowort.

An apothecary with access to an Wyrmstone Mortar can substitute two doses of bladeroot for a single dose of Imperial roseweald when preparing a potion.