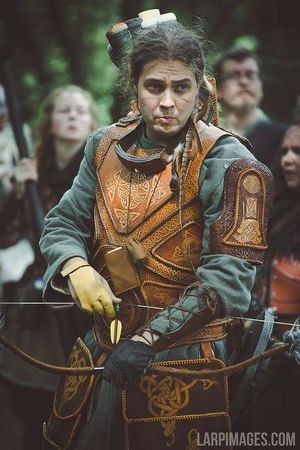 To call this thick leather armour a 'vest' is misleading. Most often it takes the form of a tough leather breastplate, greaves and bracers worn over layers of either thin chain or lighter leather. It takes its name from the traditional materials used to make them, although it is also known as a Bearhide Vest or very occasionally a Mammoth-hide Hauberk in places where mammoths are hunted. The bearer is said to enjoy some of the legendary fortitude and bloody-minded stubbornness of the animal the armour is made from. It is common for the armour to include a helmet decorated with the tusks or made from the head of the creature that provided the armour. Like many such pieces it is considered good luck for the warrior who will wear the armour to hunt and kill the animal in question themselves.

In the Marches this armour is considered quite primitive, but is popular with beaters and with those who are capable of single-handedly taking on and defeating a boar. It is considered very good attire for a Dawnish yeofolk or poor knights looking to make a name for themselves.

In Urizen, they make a similar armour by alloying weltsilver and mithril to produce articulated plate armour usually called a Mountainfall Carapace that is usually polished to mirror-sheen brightness with ambergelt resin. Sentinels in Mountainfall Carapace are often advance scouts or mobile infantry, and small groups of them serve as covert messengers carrying important documents between spires.

As if by some unspoken command, the other patrons of the drinking hall had made space round the roaring fire for the three scarred veterans. Each had been eyeing the other two with surly challenge since they had arrived amongst the other mercenaries, and the tension was obvious even to the villagers. By now, everyone was eager to see just how the triumvirate were going to settle the matter of dominance between them.

The little Marcher village usually saw no more violence than that of a farmer wringing a chicken's neck, but since that Urizen general had arbitrarily inked a line of no retreat against the orc invaders, the place had become a key forward post with a swelling garrison of Marcher soldiers and mercenaries from farther provinces of the Empire. One little village simply wasn't big enough for these three muscular, swaggering thugs and their vastly bloated egos.

The first to break the silence was the biggest of the three, a Marcher himself, his skin a patchwork of impressive scars and one leg crooked from a badly-set break. He hauled himself up from his seat to the cheers and muttered encouragements of his fellows, slammed down his flagon and lurched over to the fireplace, offering the other two veterans a glowering snarl as a prelude.

“I'm Mangler John,” he bawled. The tavern's smoky air bore witness to a moment where the mercenaries and soldiers all spat jeers or shouted affirmation, then the villagers were hushing them; the farmers wanted to hear what the thug had to say. “Mangler John! You better remember that name! I'll spill the most orc blood in this war, aye!”

He limped back and forth before the fireplace, spittle frothing at the edges of his mouth. “I hunted the Snaggle-Tusked,” he snarled, slapping his calloused palms against the leather of his armour. “Hunted him over three days and nights after he killed Old Yelm in Rutherwick, when the Beaters were too afraid to do it! I took him down with spear and axe, and made the old tusker do some good for the damage he'd caused – made him into this!” He bellowed with laughter as he tugged at the gnarled, twisted boar-tusks that jutted out from his helm. “I killed the most bastard-tough old boar in the Marches, and no orc'll stop me!”

The sound of a chair clattering against the floor came as the Dawn woman stood up, face scornful. “Some old boar? That's all you managed? Damn pig was probably half-dead by the time you found it – no way you'd catch up with a lively young one with that leg of yours.” Mangler John scowled, but it was clear that his rival had the floor now.

She strode up before the fire. “I am Knight-Errant Isolde and it is I who the orcs will learn to fear the most, not some broken old has-been. You see these furs, these teeth?” She plucked at the leathers that hung over her gleaming chain armour, and the dangling, scrimshawed teeth that dangled from them. “Wolves, the hungriest and most vicious of the winter season's dark, that came from the mountains to maraud Dawnish yeofolk! Orcs are not like grunting, waddling pigs of the forest! They are hungry for blood, fast, vicious, and they work in packs! I have hunted creatures of their ilk before, and my armour tells the tale of it!”

Isolde stepped back to her seat where the other Dawnish met her with grins and cheers, then silence fell and all eyes went to the last of the three – the orc. The lean muscle of his bare arms rippled as he pulled himself to his feet and strode to the fireplace, a massive cascade of bear-fur hanging from his shoulders over the boiled leather that encased his torso. His forehead was framed with the upper jaw of the bear, its dead face pinned in mimicry of a snarl atop his scalp.

He hadn't even spoken yet, and the villagers were impressed. But even as he took a breath and opened his mouth, the tavern's door clattered open.

A slight-framed woman snorted irritably as she tried to navigate the doorway, but the great curves of trophy mammoth-ivory that were bound to her shoulder-plates made the whole affair rather tricky. Finally in the warm embrace of the hall's interior, she stomped across the intervening space to the bar itself, her armour covered in layers of thick mammoth-hide leather with clattering ivory-charms dangling from every hem. The Winterfolk woman gruffly ordered a drink, and it was only when the innkeeper had laid it down before her and she'd had a chance to gulp back a refreshing swig that she realised the whole place was staring at her. When she turned in her seat, the bear-clad orc was actually still gaping.

“What?” she demanded, confused.

When it became clear that their gazes were on the great rack of mammoth-tusks bound across her shoulders, the Winterfolk shrugged.

Then she turned back to her drink. The orc, chastened, quietly sat back down, and the other two veterans stared into their flagons without a further word.
Retrieved from "https://www.profounddecisions.co.uk/mediawiki-public/index.php?title=Boarskin_Vest&oldid=67853"