The Brass Coast offers a chance to create some flamboyant and really expressive costumes. The Freeborn’s attitude to life is all about individuality, passion and luxury, and this is expressed best through their dress. Success is measured in wealth, and what better way to demonstrate that wealth than by wearing it openly? Fine fabrics like silks and brocades are perfect for the Brass Coast, and no Freeborn costume would be complete without plenty of jewellery.

“Life is short — let it never be dull!” The Freeborn abhor the mundane and common. Costumes should be as individual as possible and brightly coloured, layered and ever-changing.

The Freeborn look is one of bright colours, silks, jewels and sumptuousness. Midweight silks and brocades work very well for sumptuous base layers. Most costumes should also feature very light top layers, in fabrics like voiles and chiffons, to create movement; the Brass Coast lives for dance and music and the best costumes express this, even when their wearer is at rest.

Layers of light fabrics over heavier ones, in different or even contrasting colours will give a wonderful range of shades which alter as the wearer moves. For example, layered yellow and orange chiffon scarves over a turquoise silk shirt would create some deep green shades in places. Another way of creating changing and colourful outfits is to use ‘shot’ fabrics, also called ‘changeant’. These fabrics change colour as they move and look incredible in flowing robes, scarves and skirts.

Indian and Pakistani clothing and fabric shops, and charity shops nearby major Asian areas are great places to look for Sari / Saree fabrics, which are usually lightweight and highly decorated, but often reasonably priced. Sari fabric is often beaded or embroidered, with metallic patterns and sequins being popular. These fabrics can be used to make robes and scarves or worn as they are to make simple wrap around garments. Saris worn the traditional Indian way (wrapped around the waist and draped over the shoulder) are not within the brief for the Freeborn and are better avoided.

Leather is considered unappealing for clothing, it’s a heavy material the Freeborn reserve for boots and armour

With the flame being the central symbol for the Freeborn, it’s no surprise to find them most frequently dressed in strong bright yellows, brilliant oranges and every conceivable shade of red as well as gold and silver. Expensive clothing is made in brightly coloured layers to convey the impression of the fire within. The Freeborn love all bright, vibrant colours, however, and turquoise, magenta, emerald green and peacock blue will all make an appearance in costumes. Some creativity with colour will make for the best Brass Coast costumes, using a mixed palate of similar tones alongside one or two strongly contrasting colours for a dramatic effect. Black is a colour reserved for the dead, and should be avoided in your costumes. Similarly, white is only worn by the very poorest in society and should also be avoided.

The Brass Coast, while primarily a fantasy nation, does draw from Arabic and North African cultures, for example Moorish, Bedouin, Moroccan, Algerian and Tunisian costumes. There are a number of differences between the Freeborn and these real-world cultures, though. Primarily this involves headwear and modesty concerns, and the following are not suitable for the Brass Coast;

Belly-dancing costume is also not encouraged in the Brass Coast, though there are a number of similar options for dance and costume from Egypt and the Middle East which would be perfect. This SCA guide to belly dancing details some of the dances and costumes which would work well for the Freeborn. Also try looking at the Persian dance scene from 'Alexander' for inspiration.

Freeborn society is completely gender blind and their clothing reflects this, with men and women wearing much the same clothes and jewellery. Generally, an outfit will consist of trousers, top, a robe of some sort and a head dress, or a robe and head dress alone. Tunics and robes should be belted with fabric sashes, which can be tied and left long and hanging to the front or side. Clothing is usually worn loose with layers of draped material will often be ornate and decorated with shiny metal jewellery, bells, coins and other jingly bits. Jewellery should be considered to be part of this costume rather than an accessory. Folkwear make a range of patterns for North African and Arab style garments which are all perfect for the Brass Coast, for men and women. Patterns 101, 104, 105, 106, 107, 108, 119, 132 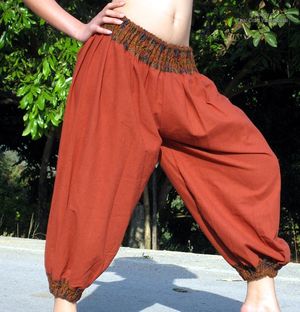 Men and women's trousers are loose and flowing, and generally gathered into the ankle. They can be full length, or end just past the knee, open at the sides to reveal part or all of the leg and can be of various designs, resembling harem pants, or Indian shalwar trousers.

The tunic top is very commonly worn over the trousers, and falls anywhere from the hip to the calf. Again, the Indian shalwar kameez outfit for men and women is a good model to start from. The tunic can be made the same as any other t-tunic, but should be highly decorated around the neck, and slim fitting. Women may wish to make their tunic a 'princess line' style for better fit.

Closed robes can be worn instead of, or on top of, a tunic, and should be loose and flowing to the ankle. These could have long flowing sleeves, or be sleeveless to show off the tunic underneath. This garment is based on either the traditional kaftan, or the thobe, but should be brightly coloured and highly decorated as in Moorish Spain and North Africa and not the plain white robe worn in the Middle East. Low necklines, slits to knee or hip and short sleeves could all be used in the closed robe to reveal layers underneath. 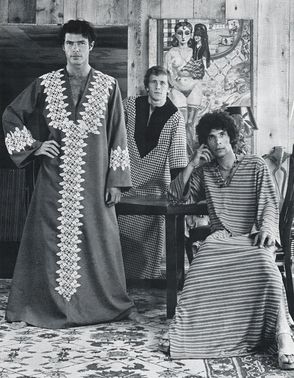 A more dress-like version of the tunic is the Anarkali suit, which is a high waisted dress with a full skirt to knee or calf, worn over trousers. A similar garment from Morocco is called the El-keswa. In the film Alexander, the Persian dancers wear a version of this dress, left open below the bust line. and worn with a circle skirt, over trousers. 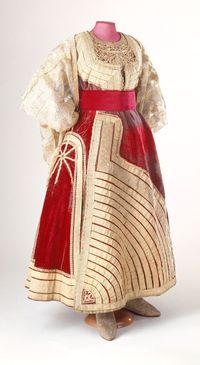 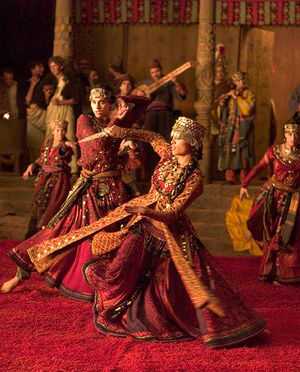 A Melia is a traditional Tunisian dress/robe, which is simply fabric pinned at the shoulders and either left hanging, or be belted to the body, much like a Roman Stola. This is probably one of the easiest pieces of costume to make, but should be worn over a tunic style top and trousers for Freeborn characters. 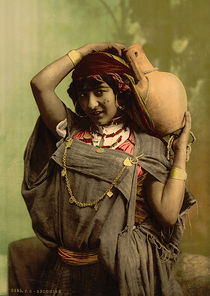 Open robes are another possibility to layer over a tunic, or even another robe and a chance to add another colour and more decoration to your outfit. These can be sleeveless, like long waistcoats and several can be worn at once to increase the layered look. Adding scarves to open robes, and one or more fabric sash belts will finish off the Freeborn look 250px

The preferred Brass Coast headdress is the tagelmust (preferably in bright red, orange or yellow rather than blue) or other veils, scarves, and head-wraps. How to tie a tagelmust video 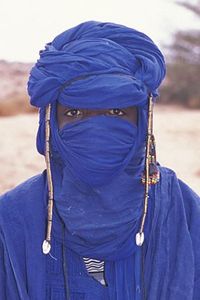 Veils are worn by both men and women to make them appear more mysterious and alluring, and to frame the eyes or face attractively. Jewellery is very common with the best pieces, like necklaces, crowns or tiaras, also designed to frame the wearers face or the hands. Ideally scabbards or pouches should hang at the waist by a silk cord that goes over the shoulder. Any tattoos should be highly intricate, henna-style.

Children are an opportunity for parents to show off their wealth, dressing their offspring in traditional Freeborn styles.

A cross between a professional priest and a party organizer, Sutannir conduct important ceremonies such as the coming of age or a wedding, and see to the spiritual needs of the Freeborn as a whole. Before the ceremony many paint their face and limbs with stylised flames in bright colours and dress in flamboyant costumes.

They are infamous for their corsairs who operate throughout the bay of Catazar. These daring privateers risk everything ensuring that the Empire's enemies are unable to threaten her shores and earning a fortune in gold in the process. It is a dangerous life but one that perfectly suits the Freeborn passion for high adventure.

Scale is the ideal armour, ideally in a bright golden colour. Chain in the “jannissary” style, particularly the chain helmets, is also great. Small pieces of plate or breastplates are also good especially if ornate and inlaid. Leather armour is common, either magnificently tooled or used to hold pieces of metal armour in place.

Armour, whether metal or leather, should have embellished edges and rich decoration, with calligraphy and ornate designs.

Golden scale is the ideal armour, worn like mail or else secured with leather.

Mail worn in the “jannissary” style and armour reinforced with ornate metal or leather plates are both good.

Scimitars are less common than straight swords and axes. The Bhuj, a large heavy single-bladed spear, is the ideal pole-arm. The best quality weapons are intricately etched and engraved. Scimitars are not common, most Freeborn prefer an axe or straight sword. Weapons should ideally be inlaid and decorated with complex designs. The Indian “bhuj” is the favoured pole-arm.

The perfect Freeborn shield is a domed, round shield that is intricately decorated in gold.

Both an online “would you like to know more!” and a guide to the amazing books you can get on amazon.