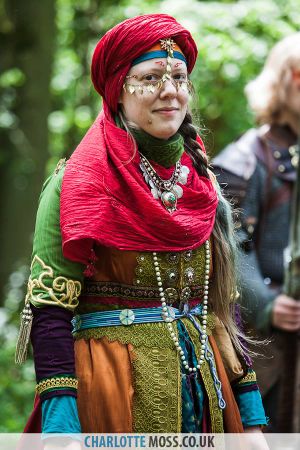 The Egregore of the Brass Coast carries three names, Dust, Glass, or Fire. Which it answers to seems to depend on the mood of the host, the whims of the Egregore, or the needs of the nation.

All three are fond of dancing and sharing tales and life.

Marcela I Erigo is the current host, Marcela hails from the coast. She grew up amongst the traders and corsairs who berthed their ships there, bringing all that was best in the Nation, and dealing with travelers from within and without the Empire. She speaks very little of her life before becoming the Egregore preferring instead to focus on listening and encouraging the stories of others. What is known is that she has an extensive family, including a younger brother of about 11, and many Aunts and Uncles, that she was a corsair or sailor for her family and is no stranger to fighting (but has suffered a war wound that occasionally flares up) and that she has visited or dealt with Suumah sufficiently to speak the language for trade purposes.

As per Freeborn tradition, when she became Egregore, she put aside her family name, taking the nation as family.