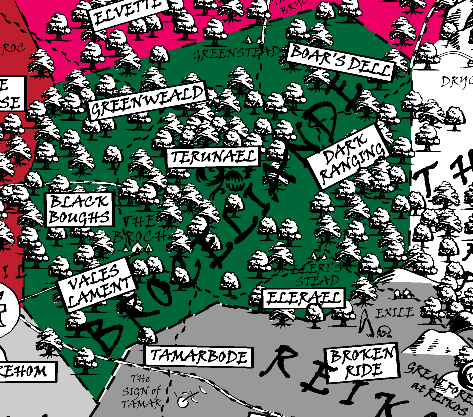 The largest collection of steadings of the Navarr, well-defended and constantly guarded. It is the western edge of the Navarri’s watch on the barbarians and darker horrors of Brocéliande. It is both fortification against the orcs, and a place of ritual where Vates gather when necessary to counter specific magical threats. The First Dance steading are basaed in the Broch and seek more than any to investigate new ways to fight against the Vallorn. Buried deep within the miasma at Black Boughs, the Broch is perhaps the steading most at risk of being overrun at any moment. Few can spend too much time here - even if the danger were not sufficient, there is the ever-present risk of green lung.

Elerael is the home to the large and influential Brackensong Steading who give sanctuary for those who walk the dangerous Trods that weave through the Vallorn of Brocéliande. The Splitroot Striding use Elerael to walk the Trods into Dark Ranging where, up until the declaration of war in Winter 378YE, they were one of the few stridings to trade with the Orcs of the Barrens.
Keywords: Forested