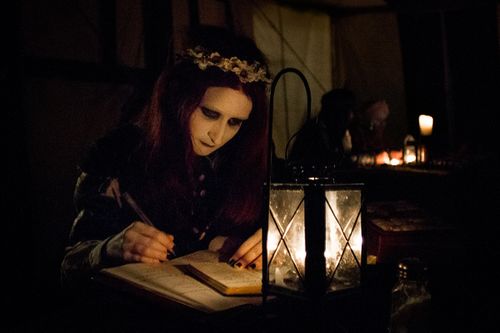 Performing this ritual takes at least 2 minutes of roleplaying. The ritual targets a single specially prepared letter which must be present throughout.

This ritual requires a specially prepared, single page letter. At the completion of the ritual the letter vanishes and is conveyed to a single named character at a known location in the mortal realm. It can take anywhere from several hours, to several days, for the letter to be delivered. There seems to be no relationship between the physical distance to the target and the time the letter takes to arrive.

The process of preparing the letter includes clearly identifying the intended recipient by name (and title if appropriate), and by their location. If this information is incorrect or incomplete, the message will fail to be delivered. Should the letter fail to arrive for any reason - perhaps the recipient is dead or they are not to be found at the named location during the next three months - then the letter will be returned to its author at the start of the next event they attend. The letter always returns to the person who prepared it, not to the ritualist who performed the ritual.

The ritual cannot send a message to an eternal or herald, to a creature in a magical realm, to a ghost, or to the inhabitant of a regio chamber. Any attempt to send a winged message to such a target will fail - even if they are in the mortal realm.

It is not possible to send pamphlets, scrolls, arcane projections, money, materials, or crystal mana, Bourse notes or anything similar with this ritual. The ritual only targets a single specially prepared page of writing.

This ritual allows a properly prepared letter to be sent anywhere in the mortal realm. The letter vanishes at the completion of the ritual, as if grabbed by a fast-moving unseen presence. Ritualists will often hear the swift beating of wings, or the clatter of claws immediately before or after the letter vanishes

There is some disagreement among ritualists as to how precisely it works, but the accepted belief is that it somehow calls forth an actual invisible, incorporeal messenger to carry the letter. The nature of the "spirit" is unclear - some speculate it is a minor creature of the Autumn realm, while others posit that it is actually an inhabitant of the mortal realm (explaining the inability to send letters to eternals), while a few claim it is nothing more than a temporary construct formed of mana and the will of the ritualist. Attempts to catch or see the spirit, assuming it even exists, have proved universally unsuccessful. Regardless, ritualists report sudden winds, whipping breezes, the sound of fast-beating wings and the 'awareness of an invisible presence' at the completion of the ritual, and recipients have reported similar sensations on occasions where they have been aware of the letter arriving.

The ritual does not create any special ability for the recipient to reply. If the letter is important enough, the recipient may arrange for this spell or a variant to be used to deliver a message of their own, or they may (depending on how far away they are) ask a merchant, or dispatch a messenger or courier to deliver a letter on their behalf.

Experiments have indicated that the process of transporting the letter erases any additional words, pictures, or annotations. Only the actual text prepared by the writer is ever transported with this ritual. Indeed, every letter prepared for use with Winged Messenger ends up evidencing a certain uniformity in writing style, and presentation. There is no commonly accepted explanation for this.

Using the ritual to send a message to an eternal has proved ineffective; the letter is invariably returned a few months later.

It is not possible to transport goods with this ritual. Anything other than the specific specially prepared letter simply causes the ritual to fail, and no mana to be spent.

The focus of this ritual is a specially prepared letter - a single side of text infused with iridescent gloaming. Often the name of the recipient and their address are recited loudly and clearly during the ritual - but there is no requirement for this information to be correct and it is common for a ritualist to use a fanciful title and description rather than a prosaic name and location.

The letter targeted by the ritual must be in the open - if it is in a box or a pocket the ritual fails. It is usually placed on a table before the ritualist, or held up in one hand for the spirit to 'grab' as it flies past. It may be inside an envelope, or tied up tightly with string - especially if the contents are sensitive. Such precautions are generally left behind when the letter is transported, however.

The runes Queros or Sular are often evoked with this ritual, as are totemic spirits of fast or winged creatures such as ravens or hawks, or legendary beasts such as gryphon or some form of pegasus.

Call Winged Messenger will only transport a letter than has been properly prepared. Any character can prepare such a letter - they do not need to have mastered this ritual, or even to be magicians to write a letter for use with this ritual. In character, the letter is carefully composed on pristine vellum using ink infused with iridescent gloaming.

You can prepare a letter at an event or before it, provided you have the three measures of iridescent gloaming required in your inventory. If you go to GOD at the event, you can hand in three measures of gloaming, and you can then create a message by logging in to your account once the gloaming has been logged.

A letter may be up to 2,500 characters at most. If you absolutely must write more than this... you will need to send two messages. However all characters you are likely to want to write to will expect a winged message to be concise and to the point since they know in-character that such communication is expensive and limited in length.

You must detail the name (and title if appropriate) of the recipient, and enough information about their location that we can confirm that it is correct. When sent to a target within the Empire, the location should include the name of a specific settlement (such as "Tassato Regario" or "Meade" or "The Village of Nuln"), as well as the region and territory. When sent to a target outside the Empire, similar level of detail is required, e.g. "The House of Princes, Jarm" or "The Tower of Crows, Sarcophan Delves, Sarcophan".

Each letter prepared in this way has a unique ID number which is used by the referee when the ritual is performed. The limitations of the ritual mean that once the letter has been printed, no further changes to the content are possible. Anything added to the letter after the ritual is performed is erased when the message is sent - including pictures, signatures, or corrections. Only the text prepared using iridescent gloaming is communicated to the target using this ritual.

When this symbol appears as part of the Winds
of Fortune it means that the named character is
specifically intended to be contactable via this
ritual and includes the details needed to send
such a message to them.

The Empire is aware of a list of specific foreign correspondents whose role is to represent their nation in communication with the Empire. These are the targets most commonly written to by an ambassador. While it is possible for a citizen to send a winged messenger to these people, it is not common for them to reply directly to the writer. They are much more likely to respond to the appropriate ambassador - even when a letter is of interest they may choose to operate through the appropriate Imperial ambassador rather than contact an unknown correspondent directly.

As of Summer 383YE, the commonly known correspondents, by nation, are:

This ritual is most useful for sending a letter to an NPC; while it could be used to deliver a message to someone on the field at Anvil, it is paradoxically most likely to arrive just before the start of the next event. In almost all cases, when sending a letter to a player-character the ritualists would be better served paying someone to deliver it by hand on their behalf.

In every case, the text that is transported will be the text that was written on the computer by the correspondent. This is fixed at the point where the letter is printed - as are the recipient and their address. When the ritual is cast, the referee connects the unique ID number of the letter to that of the ritual, and this is what the plot writer sees when they check the details of the letter.

You must have the targeting information for a letter correct before printing it. The iridescent gloaming is consumed at this point, and if there are mistakes with the letter it is a costly proposition to correct them. While it is possible to deduce an address - for example a a Wind of Fortune may mention a certain character as being in a certain location - sending a winged messenger without confirming this address in-character is a risky proposition that will commonly fail. If that happens you iridescent gloaming will be lost, but you will get the letter back in your pack at the start of the next event you attend.

The ritual is most reliable when used to write to characters who are expecting a letter, either because they are firmly established in the setting or because they have explicitly provided "contact information" to a character. While it can be used to to preemptively contact an NPC, it is much more likely the letter will return unread than if it is sent to a character whose details have been confirmed.