The cambion are infused by the realm of Autumn, a realm of naked ambition and intrigue where complex webs of wealth and influence connect the Eternals. They are ambitious, driven individuals who are never satisfied with what they have, always striving for greater mastery of themselves, their peers and their world.

Cambion are comfortable in almost any role but are especially appropriate to characters with political or economic motivations – senators and mercantilists are obvious, but a general driven to take The Throne or a priest who wants to reshape the Synod to better suit their idea of faith are also examples that might appeal to a cambion.

The cambion lineage is intended to appeal to players who want to play driven, goal-oriented individuals, and touch on some motifs associated with ruthless devils or manipulative supernatural creatures. This lineage gives players free rein to touch on expedient or ruthless roleplaying, but also encourage them to set themselves goals and achieve them. They are also fertile ground for roleplaying about concepts of politics, ethics and expediency – do the ends justify the means?

Inspirations for cambion might run the gamut from students of the writings of Machiavelli and Sun Tzu, through spies such as Mata Hari and George Smiley to powerful figures such as Shakespeare’s Richard III and Lady MacBeth and Lord and Lady Aquitaine from the Codex Alera.

What cambion are not 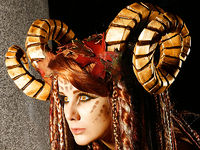 Cambion blood influences the character of the one who possesses it. Not every cambion expresses these effects to the same degree, but characters who demonstrate these roleplaying trappings possess stronger lineage than those who do not.

Cambions are born dead. It’s a strange fact of their lineage that they appear lifeless when they are born. Within a few moments of birth, however, they cough and sputter and their eyes open and they seem to flow with life. Yet even as they grow older, their pulse seems to be weak and fluttering, and they will often stop breathing for minutes on end when they are asleep. Yet they are no more or less healthy than any human. Many of them claim that it is their willpower alone that keeps them alive, although there is no medical evidence for this.

Almost all cambions have horns. At birth they are little more than tiny nubbins, but they develop as the child gets older, usually reaching their full adult size when the child reaches physical maturity. cambion blood is strong; the offspring of cambion are usually cambion themselves, but it is rare for a human woman to give birth to a cambion unless the other parent is a herald or another cambion. Unexpected cambion births therefore often result in disputed parentage or abandoned children.

The Eternals of Autumn expect their lineaged relatives to be cunning and ambitious. A cambion will have to act the part to be taken seriously by them but they’ll treat them as a rival if they do so.

Lines of the cambion

Cambion often rise to positions of authority, or become sworn enemies of authority with which they disagree. Cambion children are often difficult to raise for parents without lineage and frequently leave home early to seek their fortune.

If you're feeling creative, there's a tutorial here about how to make your own horns. Otherwise, many traders will make them to order;