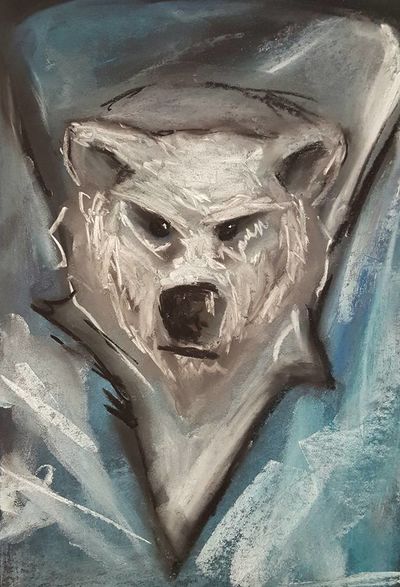 Cathan Canae does not often display a heraldic device but when she does she favours
the visage, skull, or pelt of strong, powerful beasts.

Cathan Canae is called the Queen of Ice and Darkness or the Lady of the Frost.

She is sometimes called called The Breath of Winter (perhaps confusingly, given she is an Eternal of Summer), Mistress of Blizzards and The Immovable One.

This Summer Eternal appears either as a tall, muscular woman dressed in heavy chain in the style of a Wintermark warrior-heroine, bearing a vicious hooked polearm called Ironwind. On her brow is a tall crown of ice set with three blue jewels. She usually wears a mantle of white bear fur, which stories say was made for her by the Suaq icewalker-hero Fainomaiken from the hide of the titanic Devilbear that haunted the wastes of Sermersuaq centuries before the Steinr came and the people of Wintermark became one.

On the rare occasions that she is presenting a more peaceful mien, she dresses in the manner of a rich Steinr thane, or wealthy Varushkan boyar, usually with her white mantle over the top and her regal crown. She is by turns imperious; mighty; cold as the glacier; furious as the blizzard.

Cathan Canae is rarely encountered alone; she is usually accompanied by warriors or occasionally ogre-like giants or savage supernatural beasts. She rules a great swathe of territory in the Summer realm from her immense frozen citadel. Her realm is composed of awe-inspiring mountains, frozen waterfalls, glaciers and trackless snow-covered plains, haunted by legendary monsters and bands of savage warriors. Her armies regularly engage in skirmishes and battles with those of Eleonaris on the Fields of Glory and Hayaak for mastery of the Forest of Arden.

Cathan Canae exemplifies and glories in physical strength; she is the awesome strength of the glacier, the might of the howling blizzard, the irresistible majesty of the mountain, the implacable force of the avalanche. She reaches for the strength that none can stand against, and that cannot be overcome - both the irresistible force and the immovable object. She is extremely stubborn, and respects only two things: might and resilience. She is extremely proud, and those who disrespect her earn her unending ire. As with many of the Summer eternals, she is known to occasionally call tourneys and formal challenges in which mortals compete for her favour - the Drottningbjotha of Summer 379YE in which champions from across the Empire and beyond fought in a grand tourney in her honour is a recent example of his kind of competition.

In many stories it is Cathan Canae who sends blizzards and avalanches down from the mountains, or south from the frigid wastes, to batter Wintermark and Varushka. She does not do this from wickedness, but because it is in her nature to test others. Those who endure the onslaught of winter, or who fight with courage against the armies of their enemies, become ever stronger, ever more capable of resisting whatever the world throws at them.

In Wintermark she is strongly associated with the rune Verys. 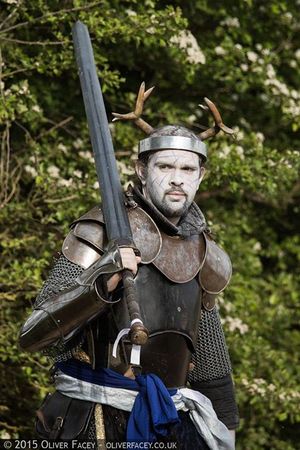 The heralds of Cathan Canae tend to be strong and taciturn.

Cathan Canae can give boons of strength, martial prowess and supernatural endurance or fortitude. She almost always demands that those who would receive her boons prove their strength bu defeating one of her champions or enduring a challenge of their resilience, constitution or will. According to stories the hero Fainomaiken endured twelve impossible tasks during his fabled courtship of this proud queen, including holding back the glacier Immanoviel for a year-and-a-day and enduring seven days and seven nights naked beneath the frozen waterfall called Unending Frost. Modern heroes are likely to receive slightly less dramatic challenges, but those who fail are often left broken or maimed. Cathan Canae has neither mercy nor respect for those who fail to live up to her high standards of excellence.

On rare occasions, she will lend a weapon, shield or piece of armour from her extensive collection to a mortal to wield for a time. Her artisans are some of the most skilled in the Summer realm and work with all manner of exotic materials including living ice, water, wind and starlight. Even other Eternals of Summer seek the aid of her crafters.

Sometimes she will offer the services of her giant warriors, massive Eternal humanoids often reaching seven or eight feet in height and possessed of unspeakable strength. She may likewise send some of the legendary beasts and savage hunters of her realm to bedevil mortals. or be prevailed upon to raise a blizzard or avalanche, or aid mortal ritualists in doing the same.

Some mortal ritualists are able to prevail on ancient pacts to call forth a frozen fortification from her realm, and she can make this process easier or harder.

A very few men and women have wooed Cathan Canae; those who impress her with their strength, courage, and fortitude may spend one night as her consort. Should they survive this honour it is said that ever after they are inured to the cold of winter - they can walk naked through the mightiest blizzard without difficulty, or swim the frozen floes of Tsirku without fear.