In addition to your skills, you pick one personal resource. Your resource will provide your character with wealth or influence at every event you attend.

It is a good idea to create a background for your character so that you have an idea of who your character is and what they want to do in the game. If you submit the background when you make the character on the system then our plot team will be able to check the details to ensure they fit with the setting.

The character generation asks if you want to choose one of the Archetypes for your Nation. You do not have to do this - they are not an exclusive list of all the possible characters in a Nation. Sometimes our plot team will write plot opportunities directed at a specific archetype. 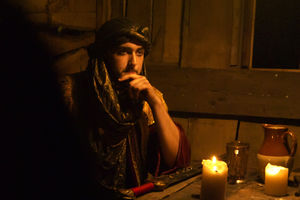 Players can save experience points accumulated to buy expensive skills. If a character dies, then the player keeps any unspent points that were gained in play and may spend them on their new character.

The exception to learning a new skill is that sometimes a skill is not general knowledge. The most common reason for this is that a ritual has been formulated, but not made part of Imperial lore. In this case, the only way to learn that ritual is to study the appropriate ritual text - a special item that contains the details of how the ritual is performed.

One Character at a Time

Players are only allowed to play a single character at any one time during the campaign. If you wish to begin playing a new character, then you must retire your current character. If your character held an Imperial title, they are assumed to have resigned from the position when they retire.

Once you retire a character, then it is not possible to play the character again at a Profound Decisions event. The only exception that we will consider is on compassionate grounds in exceptional circumstances that are approved by the game team (email matt@profounddecisions.co.uk).

If your character has died then you must go to GOD to register your character death. Any materials, coins or similar game items that were still on your character's person at the point where you stopped phys-repping the body must be taken with you and handed in.

There is no automatic line of inheritance in the Empire world; characters may choose to leave a will detailing their wishes for their personal resource and possessions, otherwise these are traditionally distributed by the character's friends and family.

If you need to create a new character at an event then you can do so at any time by going to GOD. It can be difficult to source costume and create a concept at an event so if you would like any help with rules, ideas, costume, or make-up then please ask. Members of crew are available to help you create an interesting character that you can play straight away.