The Claviger of the Basilica of Cora Holdfast is an Imperial title created by the Imperial Senate in Summer 381YE. The position of claviger is a sinecure, requiring minimal responsibility but offering a regular income of liao, and additional votes in the Imperial Synod.

The title is a little bit of a mouthful; informally the holder is sometimes being referred to as Cora's Claviger.

The Claviger oversees the Basilica of Cora Holdfast in Reikos that houses the inspirational tomb of the exemplar of Loyalty. If the basilica or the tomb were to be threatened, it would be the responsibility of the Claviger to face those threats; likewise should any opportunity related to the shrine arise they would decide how to respond.

The sinecure provides nine measures of liao to the Claviger each season, to be used as they see fit.

Voice in the Synod

The Claviger receives eighteen votes in the Imperial Synod. They may use these votes in any appropriate assembly, following the normal rules for votes provided by a Sinecure.

The Claviger is a virtue position which is appointed by judgement of the Loyalty assembly. 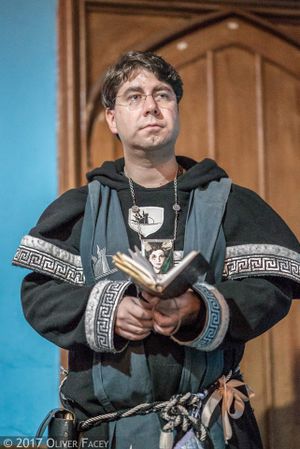 The first Claviger was Jared of the Suns of Couros, a firm dedicate of Loyalty.

A fusion of Highborn and Navarri styles and materials, built from white granite from the Vigilant Swan and weirwood from the Thimble in Therunin. The basilica of Cora Holdfast in High Chalcis is part meditative shrine and part meeting hall for pilgrims from across the Empire.

The front of the complex is a long wooden hall where visiting pilgrims are encouraged to meet their fellows over food and drink, share their ideas and problems and offer support to each other. It is a noisy and busy place but one that offers inspiration to pilgrims, who are encouraged to help each other get things done, and draw strength from the ideals of Loyalty that Cora exemplified.

At end of the hall is a large, square, domed stone chamber. Quieter and more somber that the meeting hall, a white granite statue of the exemplar stands on a raised platform in the centre. This lifelike carving shows Cora Holdfast her with her arms crossed looking upon pilgrims with a listening but challenging expression. Scenes of Cora's life and her Signs are displayed on the surrounding walls in mosaics intended to educate and inspire. Underneath the statue are hundreds of small pigeonholes where pilgrims leave written oaths and promises that they want to acknowledge, or seek help in keeping. These are cleared daily but it is customary that those who leave a written oath or promise take away and wear a slip of pink ribbon as a token of their pilgrimage and commitment.

This title is currently held by Nekoda. This title has tenure, the occupant may hold the title until it is revoked, they die or they relinquish the position. The table to the right shows the citizens who have been elected to hold this title in the years since Empress Britta died.