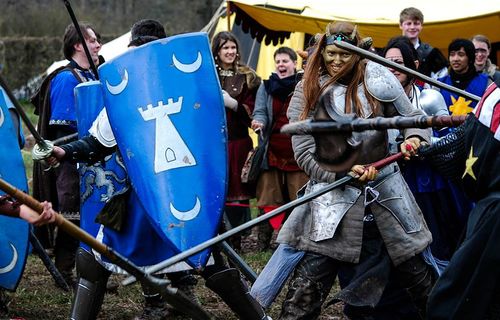 These great two-handed swords are very impressive when wielded by a knight in a harness of full plate, striding across the battlefield driving their enemies before them. It is common for them to be granted by Dawnish Knightly Orders to a new member who has just passed their Test of Mettle. When given in such a way they are traditionally decorated with the heraldic symbols of the errant’s new order.

They also have some popularity in The Marches where Yeomen with a sense of irony commission great green iron poleaxes called Dawn’s Folly.

Lady Annice rose from her knee, plate clinking into position. She turned to face the rising sun. A cloud of dust had risen over the lip of the hill. She held the new sword aloft and smiled, the Weltsilver horse’s head glistened in the light. The assembled host cheered and roared, louder even than the approaching barbarian mass. Lady Annice stepped forward against the orc charge. The crude battleline broke like a wave upon the cliffs.