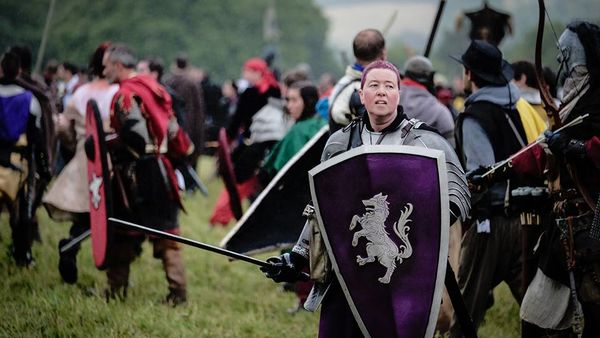 Those who actively pursue glory, especially on the battlefield, are often referred to as knights.

Dawn currently maintains four armies to fight in the Imperial wars but when Imperial fortunes have not permitted, that number has been reduced. Very few endeavours provide as many opportunities for glory as warfare. Drawn to glory as it is, it is unsurprising that Dawn prides itself on its martial traditions. Not all nobles deck themselves in a harness of plate, but every noble looks for opportunities to fight their foes toe-to-toe. Not for the Dawnish noble is the cowardly ambush or the subversive flank - they seek to face their opponents directly.

The rank and file soldiers are eager yeofolk, seeking opportunities for glory. They are led by the most capable nobles available who share their soldiers ambitions. Few Dawnish generals will lead from the rear. While there is some glory in a well-planned battle, little compares to the glory of a lord or lady who leads their troops to victory. As such most yeofolk have an abiding respect for their military leaders, born of shared ambitions and shared dangers.

Shields are highly popular in Dawn, as much for their decoration as their ability to protect. Heater shields are the favoured shape, decorated with personal or household devices. Missile weapons are rare, and regarded with some suspicion. Despite their obvious uses, it's difficult to see anything glorious in shooting an enemy at thirty paces. Archery is seen as a fitting contest of skill, rather than a glorious weapon of war.

Dawnish men and women in the active pursuit of glory, particularly those risking their lives to do so, are often referred to simply as knights. Knightly behaviour on the battlefield is expected of nobles and yeofolk alike. Those who identify themselves as knights are stating openly that they will act gloriously. The military strength of a noble house in battle is usually expressed as the number of knights they can field.

Men and women engaged upon a Test of Mettle, seeking to prove their glory, are called knights-errant. The term is used equally to describe anyone looking to prove themselves by seeking danger and adventure. Most often they are the sons and daughters of noble houses, but groups of yeofolk who wish to attract the attention of the noble houses may also become knights-errant.

The rank-and-file yeofolk are lead by the most capable nobles.

Some knights-errant enjoy the life of high adventure so much that they continue the lifestyle after passing their Test of Mettle, declining the political life of a noble house. Questing knights, as they are usually known, usually form a tight-knit group with other, similarly minded knights, and often dedicate themselves to some great quest or higher cause that they know can never be completed. If such groups are perpetuated through the generations as newly ennobled knights join the ranks to replace losses, they usually become a recognized knightly order. Such groups are usually distinctive, perhaps with a unique code of honour that every member must swear or an eternal patron to whom they swear loyalty.

Bands of knights-errant and questing knights usually include a troubadour where possible, to inspire them to glory and to record their accomplishments for posterity.

Dawn fields four Imperial armies: the Golden Sun, the Hounds of Glory, the Eastern Sky, and the Gryphon's Pride.

The Hounds of Glory

Fighting beneath an emerald green banner bearing the golden image of the rising sun, before the Gryphon's Pride was reformed the Eastern Sky was the youngest of the Dawnish armies. It has a long and proud tradition of defending the Dawnish heartlands from orcish aggression. They receive regular supplies from the people of Dawn; both civilians and soldiers alike possess a great deal of pride in the Eastern Sky and the families and descendants of those who have fought beneath the banner are fierce in their support. This means that the Eastern Sky can recover quickly even while on campaign. Many of the soldiers of the Eastern Sky have a particular hatred for the Druj barbarians; traditionally they are first to see the carnage the cruel orcs leave behind when they manage to gain access to an Imperial village.

The third Dawnish general leads the Eastern Sky, and is appointed (or re-appointed) at the Autumn equinox each year.

The first army to bear this name of the Gryphon's Pride met a tragic end during a doomed attempt to capture the Barrens in 276YE. In 378YE, the Imperial Senate commissioned the restoration of the army. It was completed shortly before the Spring Equinox 380YE. The core of the army is made up of knights descended from the soldiers of the first army, including almost the entire fighting force of House Lionsgate, but almost every noble house in Dawn has provided stout yeofolk, noble knights, and war witches to take up arms under its banner. It is committed to glorious conquest of new territory for the people of Dawn.

The fourth Dawnish general leads the Gryphon's Pride army, and is appointed (or re-appointed) at the Spring equinox each year.