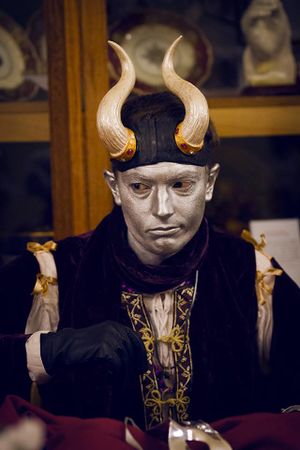 Declarations are the political tools - or weapons - of the Conclave.

A declaration can generally be thought of as a short sentence beginning "The Imperial conclave declares ..." and then a single specific thing such as "...that I am Archmage of Winter" or "...that Sadogua should be considered an ally of the Empire."

The grandmaster of each order has a power called the veil of night which allows them to raise a declaration to the agenda without revealing any specifics of that declaration, in which case it is recorded as ""The Grandmaster of (Order) raises a declaration."

The format follows the approach used for an address. Each declaration in turn is announced by the civil service, in the order in which they were placed on the agenda. The individual who raised the declaration to the agenda then has one minute to present their position, they must spend crystal mana if they wish to speak for longer.

After the declaration has been presented, those present may pay mana for the right to discuss the subject, in order determined by the Principle of Precedence.

The civil servants supporting the meeting may choose to count votes on a general aye or nay where the outcome is very clear. If voting is required, magicians normally vote by raising their hands and are counted out by order with civil servant counting independents and verifying any counts.

When a declaration is carried, the effects of that declaration come into effect at the end of the Conclave session. For example, if an Archmage loses their title due to a Declaration of Candidacy they legally lose their powers and must surrender their regalia at the end of the session rather than in the middle.

The Conclave can declare someone to hold a specific title controlled by the Conclave. This is most commonly used to propose someone for the title of archmage, Warmage or Dean of the Lyceum, but there are a number of other temporary or permanent positions that might be allocated using this declaration. Occasionally, this declaration has been used to simply remove someone from their position, by declaring that their post should be filled with nobody.

It is typical for the civil service to group all declarations of candidacy that effect the same position together at the point on the agenda where the last one was raised and conduct a single vote for the position. In this case, each individual who has raised that declaration makes a presentation in the order they raised their candidacy, then a single discussion takes place followed by a single vote. The candidate with the most votes takes the title.

The incumbent does not automatically get to make a presentation - although there is nothing to stop them raising themselves as a candidate if they realise someone is challenging for their title. They may speak normally during the discussion period, and the incumbent is automatically presented as an option during the voting process without the need for a separate declaration.

It is the responsibility of the previous holder of the title to ensure that all regalia passes to the new title holder speedily and with the minimum of fuss.

The Conclave makes an agreed upon statement of belief, intent or support. It has no binding legal element but clearly expresses the intent of the Conclave. It is often used to decide that the Conclave agrees to bring a matter before the Senate, and potentially to nominate someone responsible for liaising with the senators to raise a motion there.

Occasionally the Declaration of Concord is used in advance to declare that a specific magical act will not be considered sorcery. In 326YE for example, a number of curses were placed on individuals who had been identified by the Shuttered Lantern as supporters of the briars involved in the Freedom heresy. Given the personal power of several of these individuals, the covens involved sought this Declaration immediately before placing the curses and used it (successfully) as a defence when magicians associated with the Imperial Senate and Imperial Synod tried to have them declared sorcerers in the aftermath.

The Declaration of Concord has also been used to set in motion the sequence of events that lead to the creation or dissolution of a Conclave order.

Anyone raising a Declaration of Endowment must state what property of the Conclave they wish to transfer and who to. The recipient may be any Imperial citizen - but it can also be one or more of the Conclave orders. Any resources, items or riches endowed on an order are added to that order's vaults, and distributed to the grandmaster either after the session or at the start of the next summit.

The Conclave cannot rescind a Declaration of Endowment; once passed the item or items become the full legal property of the recipient. The Conclave can indicate that they expect a magician to bequeath an item to the Conclave when they are finished with it, but they cannot create a legal obligation to do so as part of a Declaration of Endowment. If the Conclave is bequeathed a resource that provides an ongoing income then they may either pass a declaration to endow the resource - or instead endow some portion of the income accrued to date.

The Conclave may declare someone to be a sorcerer. The most common reason for this declaration is as a result of an abuse of 'legal curses' against citizens or allies of the Empire, or against those engaged in suspect trade of magical resources (often in conjunction with a legal penalty assessed by an Imperial magistrate). If this Declaration is made:

All crystal mana and other prohibited items (bar regalia) owned by someone declared to be a sorcerer is legally forfeit to the Conclave. A sorcerer who violates these prohibitions will be subject to arrest and trial before a magistrate. During the Spring Summit 378YE, the Imperial Senate voted to add a prohibition against interaction with eternals and their heralds to the declaration. During the Summer summit 380YE, the definition was further expanded to preclude possession of certain non-mana items that allowed ritual magic to be performed.

The Conclave may reconcile a sorcerer with the Empire. If this declaration is made, all rights that were taken from them are returned. They regain possession of any confiscated mana site, but not of any crystal mana it may have produced while they were sorcerers.

This declaration can also be used to remove or modify a ban placed by the declaration of interdiction.

The Conclave may declare a specific eternal is an ally of the Conclave. Members of the Conclave are encouraged to demonstrate courtesy and even aid these Eternals, or their Heralds, where it is possible for them to do so. The Eternal, and any associated Heralds, gain the rights of Amity. This declaration overturns a declaration of enmity.

Further information about the rights of Amity and a list of the Eternals who currently benefit from these rights is available here.

The Conclave may declare a specific Eternal to be an enemy of the Empire. If this declaration is made, it becomes dangerous for anyone to consort with the Eternal named in this declaration, or with their Heralds. Such an act usually results in the offender being declared a sorcerer, but they may also face investigation by a magistrate for treason. Having enmity from the Conclave brings with it a number of other drawbacks. It automatically overturns a declaration of amity.

Further information about the effects of Enmity and a list of the Eternals who are currently enemies of the Empire is available here.

This declaration removes either amity or enmity from a specific target and returns them to a neutral legal status. Any benefits gained from, or penalties imposed by, the previous status are lost at the end of the conclave session.

Once a ritual is added to Imperial Lore it is currently impossible to remove it. The best the Conclave can do is attempt to declare performance of the ritual to be sorcery with the Declaration of Interdiction. In the past, the Conclave has often approached the Imperial Senate for assistance paying the ten Thrones, but this requires a separate motion from the Senators.

While rituals that are part of Imperial Lore are available to any Imperial citizen, there are circumstances where a magician might wish to share one of these rituals with someone else, or may simply desire a ritual text for their own personal library. Doing so invariably requires the creation of a ritual text, which can be handed over to the target. A magician who brings a declaration of dissemination before the conclave must name a specific ritual that is part of Imperial lore. They may also name a person or group who will receive the ritual text - for example "the Jarmish house of Radz" or "the Asavean ambassador". If the declaration passes, the civil service will arrange to create a ritual text and deliver it to the individual by the start of the next solstice or equinox at the latest.

Creating a ritual text through the declaration of dissemination requires ten thrones to pay for the codification of the ritual (by handing in to GOD in your end of event baggie and then emailing in your CID and ritual name).

The Conclave may censor specific rituals, items and materials that represent a significant magical danger to the Empire. In the case of rituals it doesn't prevent knowing the ritual, but it means that producing the magical effect that that ritual creates is henceforth illegal. For magic items and materials it is illegal to use the interdicted items or materials and they should be handed in promptly to the civil service to be destroyed or placed out of reach, as appropriate.

The Conclave has interdicted the following as of the start of Summer 379YE.