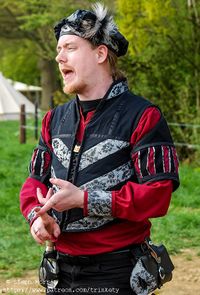 A section to draw together the three key influences for nation's costume look. If a nation genuinely has no entry for one of these three sections, then skip it, don't pad it.

A section dedicated to hats and outerwear. Talk about the importance of hats, how they improve any costume, describe the kind of hats that are best for the nation. Also describe the kind of things you need to make a costume practical and effective and warm - but still look good for the nation. Reiterate a point (for inclusion on the costume page) that events are frequently wet and cold and stress the value of having a cloak or other appropriate costume that you can throw over your costume.