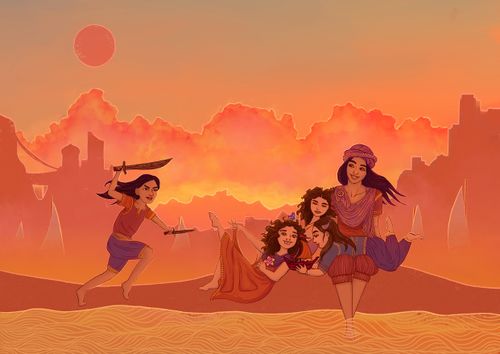 The three tribes of the Freeborn are each sub-divided into scores of different families. These extended families are the basis of Freeborn society; members of a family will often live together in large sprawling estates of houses and villas. In contrast to their mercantile attitude with others, family members can be generous and gracious with each other, without any expectation of favour or obligation. What they do expect is a strong sense of loyalty towards the family, to betray your family is one of the most heinous crimes you can commit in Freeborn eyes.

Each family appoints a dhomiro, effectively the head of the family. The main role of the dhomiro is to represent the family to outsiders and to give the family leadership and direction. Each family has their own method for selecting their dhomiro, but it is usually a senior member of the family who is well respected by all. The goal is to identify an individual whose leadership will benefit the family and who they can unite behind. It is not unusual for the dhomiro to change over time; most sensible dhomiro will step aside if they realise they no longer possess the support of their family.

A family can be exceptionally large, so there is no requirement for the active members be closely related to each other. They also have a habit of adopting individuals with no family of their own who have become fast friends of one or more family members. Adoptions are normally handled by, or at least approved by, the dhomiro of the family.

The Freeborn family is intended as the easiest way for most groups of players to create a Freeborn group. Freeborn families often have sprawling mercantile interests, so it is a simple way to create a group who intend to try and earn their fortune in the Empire. Smaller families often work together to run a parador, the traditional Freeborn meeting place, so they are perfect for any group that is interested in running a professional hospitality tent. Freeborn families can easily include most characters: skilled warriors who protect the families' caravans, learned mages who serve as fortune tellers for the family, or wise priests who offer spiritual advice and organise great parties. The Freeborn family has been designed to include all these characters.

A family can be as small or as large as you like. Characters who are part of the family don't need to be related to other characters, they may be distant relations or even outsiders who have simply been adopted into the family. There might be hundreds of your family who never attend events, working on your family's estates, fighting as mercenaries in the Empire, or crewing a fleet of ships. Or your family might be just the characters played by you and your friends when you come to the events. The Freeborn family is intended to be flexible enough to support whatever suits the background for the kind of family you want to play.

Before choosing to play a Freeborn family, it is worth looking at the other social roles that exist in Freeborn society. A group that wants to play the members of a ritual team may find something built around the hakima concept is a better fit for them. Or if your group wants to focus totally on fighting and battles you can play that as a family group but it is also worth looking at the kohan to see if that is a more enjoyable basis for a group. If you want a more general mix of fighting and trading, you could create a Freeborn family but play one that operates one or more corsair ships.

A family can contain members of any of the three tribes - the Erigo, the Riqueza, and the Guerra. It's not unknown for a family to be dominated by one tribe or another, but it is rare for all three not to be represented.