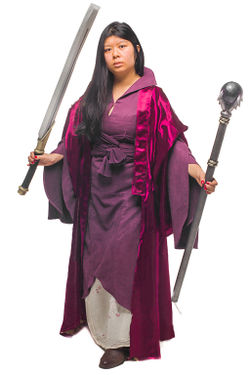 These fine robes are made of the finest cloth woven with threads gold, silver, mithril and orichalcum. The robes are most often dyed with a vibrant and delicate combination of green iron ore and iridescent gloaming, leaving the cloth with a viridian, cerulean or deep umber tone, decorated with copper-and-green-iron alloy wire. The intent is usually to impress onlookers, and to grant a confidence and sense of pride to the wearer. They are very popular in Dawn, Urizen and Highguard, places where magicians are likely to fight in close proximity to warriors. On a battlefield the robes are often worn over or beneath a suit of mage armour.

Symbols of Pride and Courage are often included on these robes, especially when they are worn by Highborn magisters or priests with a mastery of magical lore.

It is with my deepest regret that I must inform you of the death of your envoy, Seer Gnaius Thunderspire.

Gnaius reached our city via the Dawnish pass, braving terrible conditions to reach my audience. I found him to be urbane, polite and clever, a credit to your Spire and your people, and I am glad to confirm that I am happy to agree to your suggested exchange. Copying the texts he mentioned will benefit both my guild and your spire and I look forwards to adding your offered tomes to our library.

Sadly, with the enemy at the gate and growing pressure within our streets, the city grows less safe. I am still attempting to discover who sent the assassins, but they struck when I was taking dinner with Gnaius and a number of other note-worthies of the city – as yet, I am unsure as to who their true target was.

Nonetheless, as my bodyguards rushed to defend us from our assailants, it is with the utmost respect and awe that I must tell you that Gnaius – unarmed, and clad only in the beautiful cerulean of his envoy's robes – stood from dinner, graced me with a final comment about the quality of the fine wine we had partaken of, and strode to where my guards held back the assassins at the top of the stairs.

There, he wove battle enchantments such as I have rarely seen. I wish to reiterate that he was entirely unarmed and unarmoured, yet still he stood proudly and bestowed upon the bodyguards blessings of the utmost vigour and speed. Under the blessed effects of his incantations, they fought as hard and fierce as dervishes of the Virtues, and Gnaius kept weaving his spells even when I felt sure he must falter and stumble from the sheer effort. The sight of the noble Seer, a man of learning holding back the foe with his words even as his robes shimmered in the lamp-light, will stay in my mind as an inspiration and as an honour to the fallen.

I am aggrieved to say that, while our assailants might have lacked in virtue, they did not lack in wits, and upon realising that their imminent defeat was caused by one lone magician, they struck at him instead. Their blades were coated with toxic venoms.

I promise you that I will not rest until I have discovered those responsible for this assault, and I will ensure that both my own guild and Thunderspire are avenged for the insult done and the lives lost. For now, I have kept his robes; not out of greed but because they bear the Rune of Debt, and I will hold to it as a reminder of the debt I owe Gnaius and, in turn, yourself and your spire.

When justice has been done, I will wash the robes clean and return them to you.

Guildmistress Katarina of Holberg, of the Saeftinghe Charter of Reclamation