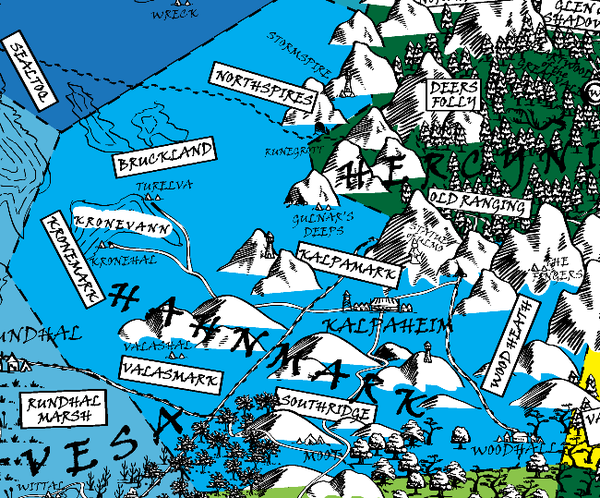 The territory of Hahnmark is spread along a series of treacherous mountain passes, the rolling foothills beneath and the wide plains that stretch toward Sermersuaq and Kallavesa. In ancient times it was the centre of the troll kingdom, but today is considered the ancestral homeland of the Steinr in Wintermark. The other passes through the mountains are likewise protected by fortified halls, preventing access to the rolling hills that drop down towards fertile plains.

In the oldest days, before the coming of the Steinr, Hahnmark was the heart of the troll kingdoms and it was here that the three peoples first came together to oppose their enemies, and to create the union that has made their people the strongest in the world. The peaks of eastern Hahnmark are scattered with relics from the troll kingdom, mostly ruined and empty, or haunted by malignant spirits who hate the people of the lowlands with an endless, frigid spite. The higher peaks are avoided by sensible folk as a consequence.

Hahnmark is a rugged land, like the people who call it home. A slight majority of the population are Steinr, but as always there is a nearly equal presence of Suaq and Kallavesi people in its prosperous halls. The people of the rolling hills enjoy a high level of prosperity, their wealth coming from trade with other Imperial nations; from the mines and farms of the mountains and the flatlands; and from the strong sword-arms of it's warriors.

The Senator for Hahnmark is appointed by the Steinr during the Autumn equinox, and is almost invariably from Steinr stock.

During the invasion of Skarsind, many refugees came down through Pakaanen's Pass to find temporary homes in Northspires and Bruckland. Since the territory has been reclaimed, many are returning to their homes - although a number have chosen to stay permanently in Hahnmark. Concerns that the Thule might come further west and invade Hahnmark proved groundless, but there were repeated calls for the Hall at Kalpaheim and the vigilant Stormspires to be reinforced and further fortified. Successive Senates failed to agree to the amount of white granite needed, and the projects were largely abandoned. 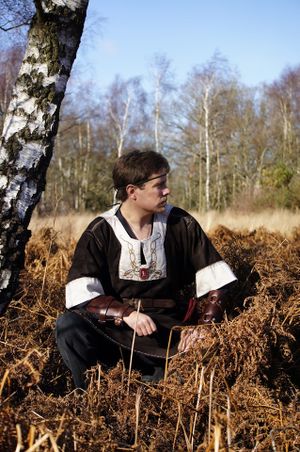 The largest settlement in Wintermark. Once capital of the entire nation, this is the site of the original joining of the three cultures. The settlement circles a stone fortress built in the first days after the defeat of the trolls - the Hall at Kalpaheim - parts of which extend into tunnels dug deep beneath the mountains. A prosperous hub for trade with other nations, Kalpaheim guards a large pass through the mountains that serves as a major trade-route down into the Marches, and the rest of the Empire. Other valuable trade routes include those to Hercynia in the north-west, and through the Navarr territory to the forests and mines of Skarsind and ultimately Varushka.

As well as safeguarding the prosperity of Hahnmark, Kalpaheim is a central feature in the heritage of the Winterfolk. The Face of King Ulmo, an immense carving of the first monarch of Wintermark, looks down upon Kalpaheim from the side of one of the western mountains. It serves as a reminder that the eyes of history are upon the town and the people of Wintermark. This impressive feat is one of the wonders of the Empire, constructed long before the nation joined the Empire by a trio of Artok under the control of the icewalker Gilda Heimssdottir. She also dug out most of the tunnels that parts of the hall now occupy.

When the Steinr travelled through mountain passes to find the Suaq and Kallavesi, they sought guidance in visions. It is said that this high-mountain with its four jagged peaks rose above the mist in the early daylight, pointing out the way. It is now home to a religious settlement called The Fingers, where the virtues that founded Wintermark are celebrated; the Courage to carry such a bold plan through, the Pride gained through the trials of the journey, and the Loyalty that now joins the three peoples.

An old series of copper mines in northern Kalpamark that unexpectedly broke into a much larger cave network beneath. The full extent of the caves has never been mapped, since ice and meltwater make much of it treacherous, but a wealth of minerals and metals now comes from the deeps.

In southern Northspires is found a vast labyrinthine chamber in the ice, in which many runes are carved. They are thought to be very old, and some scholars argue that the origin of runes in Wintermark lies here, rather than in the caves beneath Gildenheim. The chamber is carefully guarded. It is a matter of debate as to whether the runes bear any message -- some claim the original laws of Wintermark, and thus the Empire -- were taken from the inscriptions in this chamber.

Of all the regions of Hahnmark, Bruckland has the highest concentration of halls that have a majority of Suaq members. The cold, flat plains are scattered with low, artifical hills atop which lie stone beacons and desolate watchtowers. Between the hills wander large domesticated herds of deer, elk and the occasional mammoth. Fruitless attempts to domesticate the mammoths have largely been abandoned, but there are a few stubborn mammoth herders in Bruckland who follow the herds and occasionally harvest an old or injured member for ivory, hide and meat.

The most famous settlement in Bruckland, the fishing hamlet of Turelva lies across the waters of Kronevann from Kronehal. The two settlements enjoy a friendly rivalry in all matters; an annual fishing contest between the two has become a four day festival which boasts attendees from as far afield as Dawn.

The heartland of Hahnmark, site of Kalpaheim and the face of King Ulmo. The halls of Kalpamark are some of the most prosperous and influential in Hahnmark - possibly in the whole of Wintermark.
Keywords: Hilly

The flattest part of Hahnmark, the downs of Kronemark are a patchwork of fishing villages and farms. The largest settlements sprawl around the shore of the icy lake Kronevann, or along the many streams that connect it to its sister lakes in Bruckland. The best known of the settlements on the Kronevann is Kronehal. Claimed as the home of Sigrid Alvsdottir, legendary champion of the Steinr who slew Vatr, the one-eyed warleader of the trolls and as her reward claimed the crown of the Steinr.

The hills and mountains of Northspires are a rich source of Orichalcum and Tempest Jade. Some of the highest peaks in Wintermark are found here, and there are scattered ruins on the upper slopes that date back to the height of the troll kingdoms. Several halls look down across the rest of Hahnmark from here, the most famous of which is probably the Stormspires. A remote fortress and watchtower whose commander is often titled ‘the Eyes of the North’, Stormspire keeps a careful watch on any traffic from the North. One of the key major beacons, the folk of Stormspire also maintain and staff a smaller network of beacons on nearby peaks.
Keywords: Hilly

In the years before the foundation of the Empire, the rolling downs and woodlands of Southridge were the site of regular skirmishes between the Winterfolk and the Marchers. These came to an end with a final peace treaty, signed at the settlement of Moot. Grim-faced folk drew lines on maps and agreed to fight orcs, not each other. The place of meeting grew into a small trading settlement where Marcher grain goes north, and Wintermark sends its worked metal and leather south. Despite nearly five centuries of relative peace, however, there are occasional tales of haunted battlefields and unfortunate incidents with rowdy Marchers who ought to know better.

The woodlands and rugged gulleys of Southridge are also home to at least one hidden tribe of Feni who mostly keep to themselves but occasionally engage in banditry against travelers or poorly defended halls.
Keywords: Hills

Rugged Valasmark slopes down towards the cold fens of Kallavesa to the south-west. In a populous valley near the centre of the region stands Valashal, a Hall almost entirely peopled by groups of Steinr, accepting warriors from all over the nation. Its stated intent is to be the greatest focus of martial heroism in the country and therefore the world. Without Suaq, their casualties in time of war tend to be horrific; but they also attract scops from far and wide to sing of their bravery and their dead are remembered for their glorious deeds.
Keywords: Hills

On the edge of the forests on the southern side of Hahnmark stands the bustling logging town of Woodhall which supplies a great deal of of the wood, charcoal and Beggar's Lye for Wintermark’s building, crafting and smithing. Woodhall also sees regular caravans from Temeschwar to the east, and enjoys cordial relations with the Marchers of Upwold to the south.

As with Southridge to the west, there is believed to be at least one tribe of secluded Feni in Wood Heath, although their attentions are mostly directed toward Upwold and Miaren.
Keywords: Hills