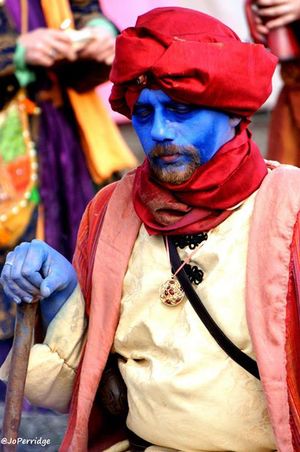 The most powerful and organised magicians in Freeborn society, the hakima are the guardians of magical lore in the Freeborn tribes. They trace their role back to the three founders who were each powerful ritualists with their own style and emphasis. A group of hakima recruits the most promising individuals from Freeborn families and give their loyalty to the nation as a whole, rather than any individual family or tribe. By drawing together a group of ritualists from many backgrounds, the hakima ensure they have sufficient ability to cast powerful rituals, something that would be difficult for a single family to achieve by itself.

The hakima play an important political role in Freeborn life, acting as neutral arbiters and serving as the glue that holds Freeborn society together. The traditional role of the hakima is to provide advice and direction to individuals and families, and to help the nation as a whole prosper. While there are fools in any position, the position of hakima is well respected by most Freeborn who appreciate that they represent something of a higher calling. The best hakima use this respect to direct the Freeborn families in the best interests of all; the worst try to browbeat families into doing as they say.

The hakima have no formal power, but their neutrality gives them an important social role in helping to settle disputes and their magical skills mean that their support for individual families is invaluable, something they can translate into additional political influence. Members of hakima groups should try to make sure they are present when all important business is being decided by the Freeborn, to ensure that the right decisions are made.

While they see their first loyalty as being to the nation, they also recognise that tribal and familial identity are vital parts of that national identity. They vehemently oppose anything that might threaten the separate nature of the tribes, or compromise what it means to be Freeborn. While a group of Hakima may represent all the tribes, the individual preserves their link to the founder. They keep the tribal element of their name, and never stop thinking of themselves as a Riqueza, Guerra or Erigo - not least to remind everyone else of the importance of seperate tribal identity to the Freeborn.

If life was just about manipulating magic it would be easier by far.

More than being just magicians, the hakima exemplify a connection to the founders of the tribes and the history of the Freeborn. They are traditionally held to be wise, able to perceive the larger picture more effectively than most Freeborn who are anchored in more mundane activities. They may be consulted when important decisions need to be made within a family, or when magical assistance is sought. They rarely wait to be consulted however – a hakima is likely to be poking around any important business ready to offer a suggestion as to what to do next.

They are especially cautious about preserving the traditions that make the Freeborn what they are, and about preserving the links to the founders that form the underpinning of tribal identity. They have little time for dabblers and charlatans who debase the legacy of the Founders, and offer advice that claims to be based on divination but is as often as not made up on the spot.

While some Hakima groups draw specifically on a single tribal approach to magic, many more combine the key elements of the tribal traditions to include drumming, fire and poetry. As with all Freeborn ritualists, it is common for a ritual to be accompanied by a number of non-ritualists whose role is to create the proper atmosphere by joining in the singing and dancing. Wheras a "dabbler" will perform a ritual with and for the benefit of a single family, however, a Hakima group is likely to invite any and all Freeborn to participate in their magical workings.

The hakima are intended to allow players to play a group of Freeborn ritualists who also have a significant role in the politics of the Freeborn nation, if they choose to do so. Players can choose to create a hakima group rather that play a traditional Freeborn family.

Individual hakima characters are recruited from every Freeborn family in a tribe, so you can still define your Freeborn family as part of your background. If you want to be from an existing Freeborn family, one played by current players, then it's worth contacting the group just to check they are happy with you doing that. Balancing the loyalties to your tribe with old ties to a family can be part of the fun of playing a hakima . Otherwise you can define a small NPC family that your character is from.

It's perfectly acceptable to have characters in the group who aren't playing hakima . Members who want to play warriors should take a look at the kohan character role, who are often found with the hakima. There is no reason why a group of hakima wouldn't associate with a sutannir or a merchant, but if your group doesn't include these sorts of characters you are likely to be dependent on the other Freeborn family groups for help, a situation which will make the events much more enjoyable for everyone in your group. You will have to roleplay with the Freeborn families to obtain what you need, which is a lot more fun than just being able to sort it out without any roleplaying required.

Focusing your group on magic will make it more enjoyable for everyone in the group but it will also bolster your groups reputation and ability to perform powerful rituals. The hakima's position is derived from the magical support they render to the other families in their tribe, the more focused on magic your group is, the more important you will be to all the other family groups.

It is possible to play a hakima character who is part of a Freeborn family group. Most hakima try to separate their duties to the nation from their ties to their family, but this is not always possible. Your character might be associating with a family to help give them direct guidance; working with them to achieve some long term goals; or simply belong to a group of hakima who maintain closer ties with their blood relatives than normal. Ultimately though the respect the families are supposed to have for the hakima is based on their neutrality, on the fact that the hakima are loyal to the Freeborn people rather than any individual family. You can't expect other players to treat you as a hakima if you are very obviously just a ritualist who is part of an Freeborn family group. If you want to play a ritualist who is part of a family group, it may be better to play that idea to the hilt, perhaps even a character who has rejected the role of the hakima in favour of remaining loyal to their family.

You can create and play a lone hakima ; it's hard to be powerful as an individual ritualist but your character may be able to make themselves essential by performing weak but important rituals.

The political role of the hakima is meant to be a subtle one. Part of their influence comes from the way they place the good of the nation above that of any one tribe or family, so the more unbiased you can be, the more power you are likely to wield. The magic rituals you can offer are vital to the other groups, so don't be afraid to use that to get what you want from them, but the more subtle you can be about it, the better. If you try to throw your weight around and expect other players to do what you say because "the brief says the Freeborn respect the hakima" you are going to get nowhere. The hakima are supposed to be shrewd and wise in their dealings with the families; you have to play that part of the Freeborn brief to get other players to play theirs! Still, some Hakima such as the Red Hills Coven of Kahraman make careful use of curses when dealing with those who transgress the traditions of Freeborn society - such magic represents the "stick" that accompanies the "carrot" offered by the enchantments of an organised Hakima coven.

It is also worth noting that the Hakima consider the welfare of the Freeborn more important than that of the other nations that make up the Empire. In a dispute between a Freeborn family and a League Guild for example they will almost certainly be staunch supporters of their fellow Freeborn regardless of what might be "good for the Empire." This can be a great excuse to be stubborn, and help other Freeborn players resist the temptation to compromise with outsiders.

They are also very much still Freeborn - their magical support will usually come with an appropriate cost attached to it.

The hakima are written with a degree of hostility towards those ritualists and spell casters who are not hakima but have remained part of a Freeborn family group. These characters undermine the power and influence by offering the families a way to perform rituals without being dependent on the hakima. The hakima consider them to be charlatans, which for a group who view themselves as wise and learned guides is meant to convey a degree of scorn and contempt for these dabblers. A good hakima character will rarely pass up an opportunity to demonstrate how much more effective at magic they are than the fortune tellers in the families.

Please don't be intimidated by the magical traditions set out for the three tribes. It's great if you are able to make effective use of your tribe's magical tradition, but it's not required. You're better off picking an approach that you're confident you can do well and enjoy than trying something you are hesitant about.