In the world of Empire, most people think of magic as the working of magicians, eternals or similar creatures. However, there is another form of magic which does not require the user to be a magician. Hearth magic employs the innate natural magic of the world to produce subtle but significant effects in much the same way that a compass needle always points to magnetic north.

Hearth magic is unpredictable because it is primarily about roleplaying - it exists to give players a way to make the stories involving their characters more enjoyable. We also use it to give the plots we create a mythic quality. Hearth magic absolutely relies on people to choose to roleplay it to work, but it is designed so that the the more you embrace it, the more fun you will have. 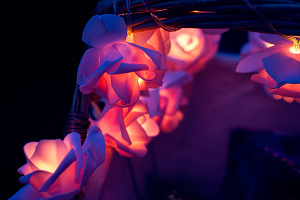 Hearth magic employs the innate natural magic of the world to produce subtle but significant effects.

The goal of hearth magic is to make the world a more magical place, somewhere that operates to a set of laws that prize drama and narrative. Roleplaying is fundamentally about creating engaging stories so Empire is a more evocative setting if a knight who receives a Dawnish favour really is strengthened by it. When a knight roleplays that a favour played a role in helping them win glory, the rules for hearth magic support their narrative, and the game is made deeper and more engaging for everyone.

Hearth magic is comparable with roleplaying effects - you determine the effect that hearth magic has on your character. If a rival gives you a curse coin - it's not up to them or our refs to decide the effect that has on your character - it's up to you. You decide if you are cursed or not, you decide what effect that curse has, and you decide what you might have to do to get rid of it. We try and give as much guidance as we can on the various pages on hearth magic - but ultimately it's up to you how it affects your character within the limits of what is laid out. If you want some guidance then you can talk to your egregore in the field, or email us between events.

Sometimes hearth magic effects will not be to your character's advantage - but is to your advantage as a player to have something terrible happen to your character if it makes your event more dramatic and exciting. Hearth magic works best when players cooperate to use it to create great stories for everyone. The intention is that the more you engage it with it, the more fun you will have.

Hearth magic is not a source of supernatural strength and does not provide a mechanical benefit, regardless of how you use it. Because the effects of hearth magic on your character are determined by you, it would be impossible to play-balance that if it provided a game benefit like additional hits or the ability to cast more spells. Hearth magic will often change how you think or feel, it might make you wise and cautious, or rash and over-confident - but unless it explicitly stated on the wiki or told otherwise by a referee, then all the benefits are intangible and unquantifiable.

For example, if you are affected by a ritual magic curse, you can't ignore the effects of the curse because you are protected by hearth magic in some way. That would be a mechanical benefit of hearth magic, which is not allowed. However you will determine how your character responds to the roleplaying effect of the curse and it is appropriate to incorporate hearth magic into that story, for instance suggesting that only the poppet you carry has prevented the effects you do suffer being much worse.

Hearth magic is never dependable. Although hearth magic reflects the natural laws of the world of Empire, you cannot do useful experiments on it because it intentionally defies the possibility of any deeper understanding by being unpredictable and unreliable. It exists to support evocative stories not scientific discoveries. The laws of hearth magic, such as they are, are understood as well as they ever will be by the characters in the setting. There isn't some deeper truth or understanding which will be revealed over time to those who search it out. Hearth magic will always defy any attempt to experiment or explain it beyond the understanding provided on the wiki.

The rules of hearth magic are the same everywhere, though they are often expressed differently due to different national traditions. For example, it is well known that significant gifts given at crucial moments, can become imbued with a power that reflects their importance. In Dawn, this happens most often with the giving of favours. In the Brass Coast they tend to give unique coins as special gifts, in the League someone might give a loyalty ring. People give different gifts, but the underlying hearth magic remains the same.

Although the laws are the same everywhere, different nations focus on the hearth magics which are important to them, so there's no need to be familiar with the hearth magics described for other nations. We encourage players to focus on the traditions of their nation because Empire is more fun if you wholeheartedly embrace your nation's brief rather than try and take a bit from everywhere.

Most people will only be familiar with the hearth magics that are important to their nation, but that doesn't mean the hearth magic of other nations can't affect you. If you're struggling to decide how to interpret the effect a Wintermark curse coin has on your Marcher character then the guideline is the same as it is for any hearth magic - what makes a good story? If embracing the curse will give you and other players opportunities to have some great roleplaying - then go for it. If you can't see how this hearth magic makes an interesting story for your character then you can play it down.

Magicians can also employ hearth magic when performing spells and rituals. It can provide a useful vocabulary for a performance of magic, in much the same way that magic traditions like blood magic or dramaturgy do. You can also use hearth magic to interpret the effects of rituals, a business that is targeted by Streams of Silver always gains 24 rings over the next season, but the use of hearth magic in that ritual may affect the story you tell of how you came by that additional wealth.

Understanding hearth magic may occasionally give you insight into a plot - either an understanding of what is happening or why - or an inkling of how to deal with it. This is particularly true when dealing with eternals. As magical beings, their behaviour is governed by the crucial importance of hearth magic every bit as much as the iron laws of their intrinsic nature and realm. We try to be mindful of the laws of hearth magic when creating plots and to employ them in ways that reflect their role in the setting. Thus the sacrifice of the Highborn armies in defending Urizen against the ravages of the Druj was a factor in us writing the plot involving the Three Watchers.

It's also possible to make use of hearth magic when you are creating a background for a new character. Some pivotal piece of hearth magic may form part of the story you create for your character before they enter play.