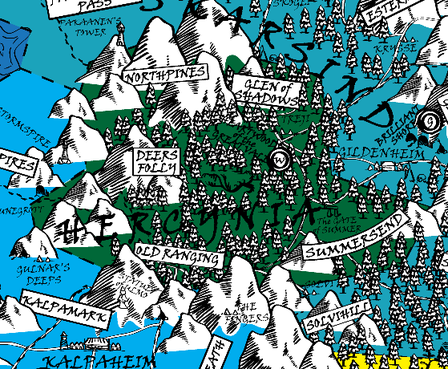 Several secluded passes through the mountains into Skarsind served as trade routes prior to the invasion of the Thule. In later years they were used to launch scouting missions into the barbarian-held territory. The steadings of the region are considered a little odd by many Navarr, and occasionally accused of having more in common with the Winterfolk than with their own cousins. There may be a little truth to this - with the loss of the Glen of Shadows to the barbarians, Northpines was cut off from the rest of Hercynia - and indeed the Empire - by a combination of barbarians and the vallorn-infested region of Deer's Folly to the south.


North Pines is the home to the Pridestalkers Striding who's rite of passage involves hunting and skinning the Snow Lions, the children of the Eternal Cathan Canae. It is also the location of the newly built House of Barbs, commisioned by the contraversial senator Rhain WInters Vigl.
Keywords: Forested, Hilly

The steading of Treji still stands here, but has been extensively damaged by the battle between the Imperial orcs and the barbarian occupiers. The artisans who made their home here combined the working of wood and metal to make weapons and armour for the Thorns of Hercynia and to support their Winterfolk allies. The Iron Roots of Treji are stand guard in this area to make sure that no threat will harm the area. The Glen of Shadows is known for their fine magical bows and spears, easily matching the more workmanlike produce of the Wintermark runesmiths.

Another mountainous area of Hercynia, but one that has fared less well than Northpines. While the mountains to the west create a natural barrier against the worst effects of the vallorn, a poisonous miasma lies over much of the region. The noxious atmosphere pools in valleys and spreads through the forest from the vallorn of Hercynia, wrapped tight around the ruins of an ancient Terunael city in the east. There are only a handful of steadings in Deer's Folly and they are all built in the western mountains - no steading established closer to the vallorn heart has survived more than a decade before it is overrun. The oldest of these is the small but ancient steading of Bont Goch. The Winterfolk Queen Ilsin is believed to have met her end here at the hands of the Vallornspawn - some scholars point to the fact that her famous standard bore a white stag and suggest it is more than coincidence the region is known as "Deer's Folly" - but if it had a name before this it is known only to historians. (OOC Note: This region is not considered to be in Imperial hands. It cannot be reclaimed until the power of the vallorn is broken.)
Keywords: Forested, Hilly, Vallorn

The forests of Summersend are sparse, giving way to the plains of Gildenheim to the north. The Gate of Summer is found here, along with several other well-explored Terunael ruins. Several steadings are built on a foundation of old Terunael structures, and it is from here that the push to drive back the Vallorn is overseen. There are several old battlefields here, most dating back to pre-Imperial times and to attempts by the Vard ancestors of the Varushkans to conquer Hercynia. Most of these battlefields have long since been forgotten but one - Mourning Hollow on the very south-eastern borders - Was said to be haunted by the unquiet spirits of dead Vard and Navarr warriors due to the result of a forgotten curse or betrayal. Due to the actions of an expedition in Winter 379YE there have been no sightings of ghosts since. Mourning Hollow is also home to the ruins of the locally named Temple of Phaleron a powerful Day/Night region that was once a large Terunael Library.

The Foxden steading is the most influential steading based in Summersend and act as a place to run messages not only across Hercynia but across the entire Empire.