The Highborn look is generally practical and restrained. Its beauty is in both the small touches – the geometric trim on the robes, the exquisite jewelry. Colours are deliberately stark and contrasting, and outfits in black and white are commonplace. Many members of a chapter choose to adopt similar garb, with the symbol of their chapter displayed prominently on the chest, shoulders, or at the breast. This is particularly true for Highborn warriors who show their solidarity and loyalty with their fellows by marching into battle decked in identical garb. Of all the nations of the Empire, the Highborn are the most inclined to uniformity, a visible display of their inner commitment to their shared faith and destiny.

Rather than displaying impractical frivolity in the cut of their garments, Highborn show their taste and wealth in jewellery, and the decoration of cloth. Jewelled and embellished trims at the hems of garments are popular, as is the intricate braiding of hair and heavy, elaborate jewellery.

Highborn materials are usually processed, such as wool, cotton, silk and velvet. They are typically solid and of the highest quality available as befits the rank of the wearer.

Black with a white contrast is most common but where there is colour, it is likely to be dark - bottle green, red, charcoal and midnight blue and always set against the contrast of white or cream.

The Highborn dress in simple, practical lines – wearing long, layered robes and tunics in starkly contrasting colours, most often simple layers of black and white or sometimes using black or white as a contrast to different colours. Decorative mosaics and fabrics with complex geometric patterns are popular.

Highborn women may choose to wear a dress rather than a robe. Highguard dresses are constructed along simple but formal lines in dark fabrics. They often have a high neckline or standing collar, lengthwise they always come at least to the ankle.

Veils are commonly worn by both sexes both in funeral rites and on other sombre occasions. They set the wearer apart, offering anonymity and a sense of de-personalisation. They are often worn when distasteful actions have to be undertaken or those associated with a rank or position of authority rather than an individual.

Some Highborn, particularly those in authority, wear hoods or cowls, usually in the colours of their chapter.

Highborn armour tends to be full length and layered or segmented. Heavy black leather is common, sometimes with pieces of plate worn over it. The Unconquered usually leave their head uncovered, but Cataphracts favour a full helm, ideally decorated with wings. Carved or decorated black vambraces are often worn for additional protection.

Large kite or heater shields are common. They are usually decorated in a uniform design with the chapter emblem in stark contrast.

Highborn warriors prefer to fight in close formation and prefer weapons suited to this style; short swords, spears and bows.

The first Empress fought under a banner depicting a rearing grey stallion on black, and so the horse became the symbol of the Empire and its leader. But to many Highborn only the best sculpture and art in the grand cathedrals in Highguard can capture the true qualities of the horse. Although their great steeds are gone, the horse remains an image of strength, willpower, speed, loyalty and grace.

Today the heraldic beast of Highguard is the Basilisk, a crested aquatic lizard. It can be found drowsing in marble, curled around alcoves or uncoiling across mosaic floors. Its eyes are always depicted shut as though asleep – except on the banner of war. The legend has it that Isora, the daughter of Permion the Lawmaker, used magic to command a Basilisk from its Eternal Realm. Where once it had been a threat, it became a guardian creature who slumbered at her command to be awoken in defence of Highguard at the time of the Highborn’s greatest need. It is a reflection of the Highborn magical and physical might, and also of the fact that even the mightiest Eternals must bow to the will and magic of mortals.

Highguard’s flag is the Basilisk coiled around the Black Bell of the Necropolis. Bells are frequently used in Highborn heraldry. Bells also form a key part of decoration, architecture, ceremony and even fashion. The way in which they remind the living of the dead, and recall the past to the current generation, works just as well in imagery as sound.

Mosaics are popular, their swirling patterns recall the winds and the tides; at their hearts, stylised representations of the heroes of old. Vast and vaulted marble domes; dusty cloisters smelling of old parchment; cool villas with fountains at their heart fill the household with the song of the water. An artistic movement has been growing over the last two decades that moves away from the traditional mosaic as a fiddly mass of tiny squares towards a simpler style involving the shaping of coloured stone to fit together in designs reminiscent of stained glass – a more elegant and modern refinement of an ancient art.

Highborn costume is elegant and flowing, long layered robes and tunics, dark coloured in starkly contrasting colours, most often simple layers of black and white or sometimes using black or white as a contrast to different colours.

Film: Lord of the Rings
File:HighFurTrim.jpg 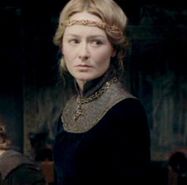 The Highborn are a militant people and this is reflected in their dress. 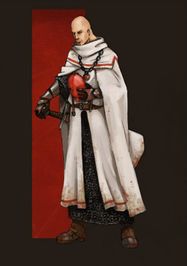 Most Highborn warriors cover their armour with a long flowing surcoat. The ideal surcoat is black or white with a design in a stark contrasting colour. The Crusader knights exemplify this tradition in real history, although an original design for a chapter’s emblem is ideal if possible. 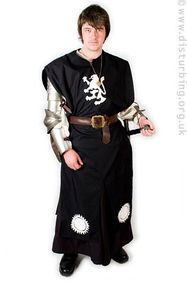 Uniforms for some Highborn chapters include cloaks with the chapter’s emblem repeated on each shoulder.

Highborn armour is usually full length - coats of plates, scale or mail with leather or plate over it. Armour is often segmented or banded for flexibility and ease of movement.

Traditional lorica in hard leather or metal can work for Highborn, particularly if the suit is tooled or decorated or the outfit incorporates a Highborn style surcoat or cloak. 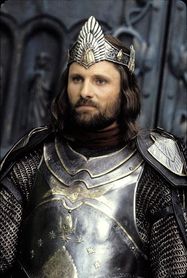 The Unconquered serve as scouts, often operating far behind enemy lines. Most avoid the distinctive high contrast clothing favoured by most Highborn in favour of something more concealing and many wear lighter armour or forego armour altogether.

The Highborn are a people with a manifest destiny, to unite the human nations and lead them to a virtuous future. Their jewellery reflects their heritage, it is refined, elegant and regal. Gold or silver worn on the brow suggests authority.

Highborn veils are designed to cover the face and conceals the wearers identity and projects anonymity. Cowls are a common feature of Highborn costume, especially for the powerful.

Highborn priests usually dress in white or dark robes with decoration in a stark colour to stand out.

Members of the same chapter will often adopt a unifom look using identical or matching items like surcoats. The visual unity emphasizes the unity of purpose and helps a chapter project power. Of all the nations, the Highborn have the strongest tendecy to form shield walls and fight in close-order formations.

Clothing for Highborn children is usually sombre and simple but good quality, with more elegant garments reserved until they come of age.