Build strong city walls and the world must come to you - and it will come to you, if only to marvel at your walls. 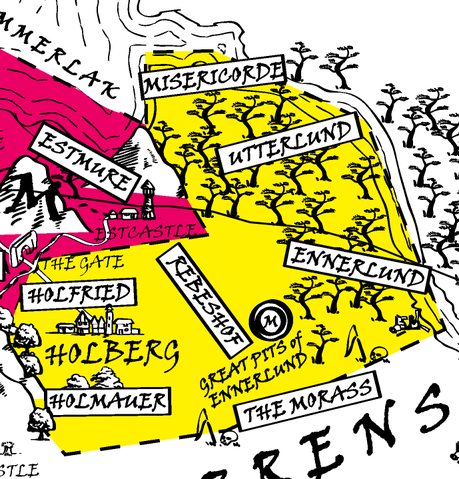 Holberg joined the League in 136YE under a riot of political strife in the Senate. The lands that surrounded the city were under the control of barbarian orcs until they were driven back in an epic five year war of conquest by Dawnish nobles and forces loyal to them. But Holberg itself was never conquered; the city was protected by a dozen high walls and the Dawnish armies had little taste for a lengthy siege. When the city was convinced to side with the Empire by League diplomats, it also successfully requested the Senate assign the territory to the League. Dawnish senators were incandescent with fury but there was nothing they could do and Holberg became the prosperous fourth city of the League.

In the decades that followed Holberg grew rich and prosperous. The lands around the city possessed a rich agricultural heritage, well known for their fine vineyards.

In 346YE, however, barbarians attacked the territory, sacked the vineyards, burnt the hardwood groves so precious to the city's crossbow makers, and laid siege to the walled city. The Senate remained paralyzed throughout this time, unable to secure funding and forces to raise the siege and in the end the territory was lost to the orcs and remains under Orc rule to this day.

By early 377YE, the walls of Holberg were in a sorry state. The Imperial Senate passed a motion to supply emergency aid to the citizens of the city, following a plan suggested by the master engineer Rhiner Van Hesselman. Money and resources supplied to the city allowed for emergency repairs to be made to the walls, while herbs and medical supplies helped to counter the insidious effects of Druj poisons. Despite the fact that the city was under siege, heroic action meant that the defences were restored to full strength.

In Summer 378YE, the defenders had been forced back to defensive positions within the upper city. The Druj, made overconfident by earlier victories, pressed their advantage in Autumn ... with disastrous consequences for the barbarians.

Is Holberg cursed?
Empress Giselle met her end here and Emperor Hugh spent much of his reign trying to get support to retake the city. Some claim that when Empress Britta decided to concentrate her efforts on the western Empire it was as much due to her belief in the curse as it was about any amount of residual nationalism. According to the scandalous Sarvosian novel The Waters of Rebeshof, the curse was the work of a Weirwater weaver cabal seeking vengeance for the humiliation of the Dawnish. No evidence to support these scurrilous claims has ever come to light. 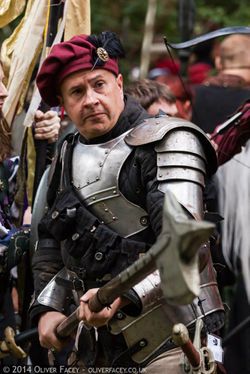 The League has never abandoned Holberg.

The City of Holberg

Holberg itself has not yet fallen. Famous for its engineers, builders and architects, the city is immensely fortified and defenders still hold out to this day. The only approach to the city that remains viable is through a narrow pass that leads over the mountains and into Dawn. The remnants of the Towerjacks army serve as a de facto garrison in Holberg, but every year their situation becomes worse. Citizens from Holberg clamour for the territory to be reclaimed, and press for the siege to be broken and the territory retaken. Unfortunately, while the city itself is still intact, the territory of Holberg is no longer under Imperial control so the city has lost their Senate seat until it can be reclaimed. The League lays part of the problem in regaining Holberg at the feet of the Dawnish. They claim that Dawnish Senators use every excuse to focus attention elsewhere, and Dawnish Generals actively resist plans that would allow the recapture of the city. Even the Empress seemed unable to break the deadlock.

Despite the currently tenuous situation, Holberg remains a vital part of the League. The city is notorious for its inventive brilliance, its ability to think of ingenious solutions to problems. Holberg invented the crossbow, but it is not inventions it is known for, so much as the ability of the inhabitants to use what they have to find solutions never before seen. Many Holberghians see life as a complex puzzle, one for which they are seeking the solution. They do not respect flights of fancy - but these people have found ways to build a city on a mountainside. They are utterly pragmatic but ingenious with it.

There is also an emphasis on learning and study that is found nowhere else in the Empire outside Urizen. Holberg already had its own university when it joined the League, something the other cities soon copied. It does not have great libraries to rival Urizen or Highguard but it is a centre of excellence for tutelage, particularly in practical skills like engineering and surgery. There have been several free companies from Holberg whose reputation as siege engineers was unrivalled throughout the Empire. Holberg gives the League a scholarly excellence that allows it to hold its own with rival nations like Urizen - they may not be able to retake the lowlands without help from the Empire, but they have ensured that the city will not fall.

The Great Pits of Ennerlund

The Great Pits of Ennerlund were rightly famous for the impressive application of ingenious League engineering. Dug dangerously close to the bounds of the Morass the mithril mine was kept dry by mechanised pumps. The pits were lost when Holberg was overrun and the mine - and its bounty of mithril - is still in the hands of the Druj barbarians - although how well they have maintained the machinery that prevents the mine from flooding is unknown at this time.

This is where the great fortified city of Holberg stands. It is one of the greatest fortifications in the Empire but has been besieged by hostile barbarians for a little over thirty years. Holfried is the only region in the territory that is in the hands of the Empire as of Winter, 377YE. (OOC Note: The walls of Holberg are a rank 2 fortification).

In Spring 378YE the Imperial Senate arranged the creation of a cemetary at the foot of the southern wall. Marcher soil and apple trees were imported and watered with waters taken from streams in Mitwold, Upwold and Bregasland.
Keywords: City

The sprawling suburbs of Holmauer are a region unto themselves. Outside the walls of Holberg proper, they have been devastated by decades of war, cannibalised by the barbarians to build fortifications of their own. Makeshift barricades gave way to increasingly sophisticated fortresses, and then to rubble. The walls of Holauer finally ceased to be a consideration in the Autumn of 378YE - a shattered casualty of the ebb and flow of battle against the Druj.
Keywords: Ruins

The northernmost region of Holberg, these dark forests were once a haunt of bandits and brigands – the bandit “warlord” Graffler made his base of operations here – and have a poor reputation as a result.
Keywords: Forested

The forests of Utterlund are tamer than those of Misericorde. At one time they served as a hunting preserve and the were the site of several cultivated woodland preserves that produced valuable raw materials for use in several industries. Owned and worked by local people, many forest workers are still in the area, enslaved by the barbarian.
Keywords: Forested

The Great Pits can be found here. Most of the region as dotted with light woodland, although great swathes of it have been clear-cut by loggers and by labourers associated with the mithril mind - indeed the area directly surrounding the mineworks was entirely stripped of trees long ago and is sometimes referred to as the "Ennerlund Wastes".

A wide plain, now dominated by an unsightly fortification built over the last several decades by the orc invaders with looted stone. Human slaves are used to work the remaining farms here, providing food to their conquerors. (OOC Note: The fortress at Rebeshof is a rank 1 fortification).

In the past, the Morass has been partially drained. Since the territory of Holberg fell the waters have risen and the swampy land expanded, turning most of the region back into boggy marsh and drowning a great many farms that once exploited the naturally fertile soil of the reclaimed land. There have been several reports of marshwalkers in the last decade although whether these are natural creatures or part of the Druj forces is unclear - the Druj will be sure to exploit them given the chance, however.
Keywords: Marsh