Imperial Orcs see money as something that separates free citizens of the Empire from slaves. Perhaps more so than many humans they understand the freedom that comes with being able to buy and sell things freely. A number of the first generation were raised in League cities, and possessed a well-developed appreciation for the power that comes with wealth.

In keeping with their instinctual desire to be part of a group, however, many Imperial Orcs see a distinction between personal wealth - enough money to live in comfort - and the wealth of the legion - the wealth that comes from and is used to keep everyone in the legion well equipped, fit and capable of doing their jobs. 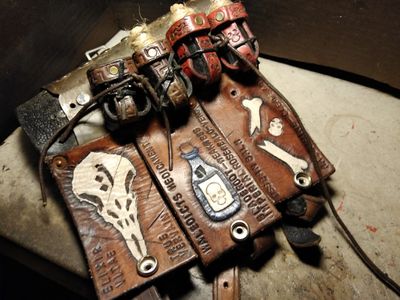 Bonesetters look to the health of their comrades, but their remit is much wider than that.

Many legions pool the majority of their wealth and resources, using it to provide for the members of the legion on the basis of need. A warlord will usually appoint one or more individuals to look after a legion’s wealth. By tradition these people are called bonesetters and are usually trained apothecaries, physicks or both.

Bonesetters are expected to attend to the physical needs of the legion, but their remit runs well beyond this. Most bonesetters proactively work to enrich their legion, investing the legion’s resources as they see fit to try to increase the legion’s wealth. Bonesetters have no formal powers but they often broker deals for the skills of individual legion members or even the whole legion, if they are confident that their warlord will support them. A competent bonesetter who is working in the best interests of their legion can usually count on their support. Few Orcs want to annoy the individual whose responsibility it is to treat the wounded but more importantly, the genuine bonesetter is assumed to be making deals for the benefit of the entire legion.

Since the legions settled in Skarsind, many bonesetters have set up their own brokerages, supporting the health and prosperity of their neighbours as well as their legion. One of the most prominent positions a bonesetter can aspire to is the Bonesetter of Torfast Trading Post, responsible for overseeing the Imperial Orc trade hub that serves as the centre of the Northern trade network. 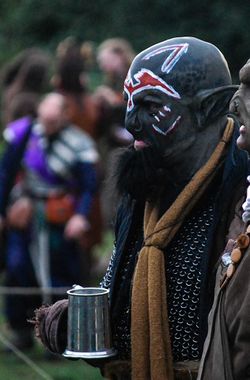 Orcs despise criminals or indeed anyone who puts their own interests above that of their group. As a result Imperial Orcs find themselves natural supporters of the Imperial legal system. If an Imperial Orc witnesses corruption or lawbreaking, they are likely to take steps to immediately arrest the criminal, and take them straight to the nearest magistrate for judgement. As a result many have found a niche for themselves serving as thief-takers.

Thief-takers earn their income by collecting bounties on criminals who have fled the law and more rarely by taking payments from private individuals looking to identify perpetrators of crimes. Thief-takers are overseen by the Imperial magistrates and the most effective work closely with them. Some legions encourage their members to take this work, believing that it earns wealth for the legion as well as performing a valuable service, but some Orcs enjoy the work so much that they make a life for themselves outside the legion forming small bands with other successful thief-takers.

The large number of Orcs prepared to carry out this work, and their strict adherence to the letter of the law, particularly enacting magistrates’ orders which would make others’ lives politically very uncomfortable has meant that in recent years more and more of this work is brought directly to the Imperial Orcs. In particular a number of magistrates have adopted the “culprit’s walk” where suspects are forced to walk around the Orc camp before being released on bail. The culprit’s walk makes it easier for Orc thief-takers to identity suspects that fail to return for trial as well as making the culprit aware of the resources available to bring them to justice. There have been three attempts by the Senate to ban the culprit’s walk but thus far they have all been unsuccessful.

A handful of legions no longer maintain links with the armies. They have come to enjoy the freedom and wealth afforded by mercenary work. These groups, called reavers, support themselves by raiding, adventuring, and hiring themselves out as guards and escorts to merchants prepared to pay to secure the martial might of an orc military unit. With their income not tied to the vagaries of the Imperial Guerdon, or the strategies of the Imperial Military Council, bands of reavers may quickly become wealthy.

Reavers are mostly tolerated by other Imperal Orcs; as often as not their wealth helps to enrich the Imperial Orc nation and thus can still claim to be serving the Empire in their way. The primary bone of contention used to be that reavers were often loyal to their own band first, and to the rest of the Imperial Orc nation and the Empire a distant second. However with Imperial Orcs legions increasingly abandoning the Summer Storm and the Winter Sun to follow the Guerdon, the distinction between the two groups is increasingly blurred.

Reaving is seen as a good way of life for those Orcs who chafe under the leadership or strict discipline of army life. Furthermore, the line between legions and reavers is easily crossed. Legions that find themselves unable to respect a general or the demands of the Military Council may up the reaving lifestyle, sometimes for years at a time. Reavers who become prosperous may enjoy the luxury of supporting one of the Imperial Orcs armies without concern for Guerdon shares, or as a route toward taking a more significant role in Imperial Orcs society.

Until recently most Imperial Orcs favoured military units and only a few invested in herb gardens, mana sites or other static resources. Now that their dream of a homeland of their own has been realized, increasing numbers of them are moving there to take up stewardship of the valuable resources left by the departing Wintermarkers. They are swiftly proving themselves to be capable as farmers, business owners and more, and for the most part they are able to fill the many needs of their nation's people.

However most Imperial Orcs still regard mines with a great deal of distaste and few Orcs can be convinced to work them. As a result the Imperial Orcs usually avoid them and those that do own them often have to hire Wintermarkers or other Imperial citizens to work them. The shortfalls in metals and other materials that the Imperial Orcs need were traditionally provided by reavers, but increased opportunities to trade with other Imperial nations and even the Thule means that there are now more options available to ensure that an Imperial Orc can avoid the stigma of having to work a mine.

The Foreman of the Mines of Gulhule in particular plays a role in keeping the Skarsind mines operational. This ministry involves ensuring that sufficient mine workers are employed to exploit the rich mineral wealth of the Skarsind mountains.