The Imperial Orcs began as slaves. By the time the First Empress was putting her Empire together, generations of orcs had been born, lived and died as slaves to the human nations. Slaves were rare in Navarr and Urizen, because they had little use for them, and in the Brass Coast because slavery was an abomination to many. However it was commonplace everywhere else in the Empire; just as it was common for humans to labour as slaves in the lands the Orcs controlled. For the forerunners of the Imperial Orcs the founding of the Empire swelled their numbers as more Orc tribes were conquered but it brought no respite from their toil.

Orc children were traded like livestock. The old and the weak were left to starve. Thoughtless cruelty was commonplace. The most common attitude of slave owners was that orcs were lucky to be alive, the only alternative they saw was death for those who resisted the expansion of the Empire. Those orcs who escaped captivity were simply never seen again, unless they were hunted down and brought back to the camps to face execution as a warning to the others.

Orcs taken as slaves were deliberately separated from their tribes to make them easier to handle. The result was that the orcs had lost all sense of identity, stripped of their tribal heritage by generations of slavery. As a result when an orc managed to escape, they made no effort to rescue anyone else. 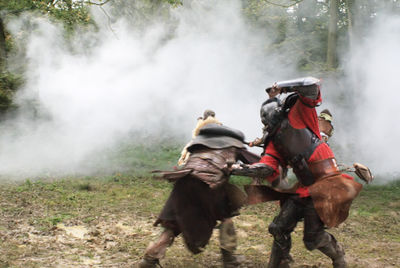 The uprising began in Varushka with the legendary orc warlord Thrace. Young, confident and strong-willed, he saw something that no previous orc slave had seen. The other orc slaves were not strangers, they were part of his legion and his tribe. Through force of will and physical might, he bound his fellows together. He engineered a collapse in the mine allowing the entire legion to escape as one. A single escape was not enough for Thrace and his legion - they had decided that all the slaves kept by the Empire were their people, and they set out to free as many of their tribe as they could.

Thrace's legion began raiding nearby slave enclosures, freeing other orc slaves and appropriating weapons and food for their growing band. Wherever Thrace's legion went, they offered the slaves they liberated a simple choice. Join our legion and come with us, or stay by yourselves and try to make it alone. The majority chose to join the legion, and their numbers quickly grew. Throughout the Summer there were numerous battles with Varushkan troops sent to deal with the uprising, but the results were indecisive and with winter closing in, the Varushkans were forced to abandon the pursuit.

By this time the legion had grown so large that Thrace was forced to split his forces in three to allow them to survive the winter. They spent the cold months practising with the armour and weaponry they had captured. Messengers were sent to the barbarian tribes, to seek aid, but they were bloodily rebuffed. If anything, the barbarian tribes seemed to hate the liberated slaves even more than the humans. From surviving emissaries, the news trickled back that no escaped orc slave had ever been accepted among the barbarians; those few who had survived the arduous trek to the lands claimed by the barbarians, and those slaves in territories that had fallen to the barbarians, were simply killed.

With the first thaws of Spring, the Imperial army tried to catch the orcs in a decisive engagement, but Thrace and his warlords resisted. The Imperial generals called in reinforcements, and finally they managed to corner the orc force with no opportunity for escape. The orcs still had the advantage of numbers, but they had only a fraction of the weapons, armour and training of their enemies and it was clear that defeat was certain without a miracle of some kind. Determined not to allow the uprising to be crushed, the legion sent the best warriors out in small groups in the night with orders to slip past the Varushkan armies and carry the uprising to all the lands of the Empire. To give them cover to make their escape, Thrace led the legion in a surprise attack against the encamped Varushkan armies.

Woefully under-equipped compared to the Imperial troops, the legion managed to keep the Varushkans busy until late in the day. They fought valiantly, desperately, but they were no match for the massed might of two imperial armies. It is widely believed that Thrace died in the engagement with the Imperial armies. To date no Imperial Orc can claim reliably to have heard his voice and some believe this means he is not actually dead. It seems unlikely that he is alive, but equally unlikely that such a pivotal figure would not have become an ancestor after death.

The Empire crushed the slaves and on the orders of the Varushkan generals no prisoners were taken. Every orc not killed in the battle was executed, and survivors were mercilessly hunted through the early winter months. The bodies were burnt in massive funeral pyres, and the Empire considered the matter at an end.

On the first day of Spring of the next year, the soldiers that Thrace had ordered to flee Varushka attacked slave camps in Wintermark, Dawn, the League and Highguard. They had spent the winter spying out all the weakest defended areas where slaves were being held and they fell on them slaughtering any Imperials not smart enough to run. Their numbers swelled rapidly, just as they had done in Varushka, while the Empire struggled to respond to a widespread threat erupting in lands it considered secure.

There were atrocities on both sides during this period - stories of entire camps put to the sword by terrified owners, or villages sacked and every human within slaughtered by rampaging orc slaves in search of supplies. Not all contact between orcs and humans was hostile however; a handful of notable Freeborn and League merchants realized the potential for profit and began to sell weapons and provisions to the orc legions in return for plundered ores.

While the orcs tried to avoid pitched battles, their groups became too large to move effectively especially in open lands. Several major engagements took place in Dawn and Wintermark and although the orcs suffered a number of defeats there were always more camps to raids so their numbers continued to grow. The message of the revolt spread through the orc population, no matter how hard the Empire tried to prevent it. "We are one tribe," it ran. "We are one people, and we will not be slaves any longer." Several camps spontaneously revolted and while most such mini-uprisings were ruthlessly suppressed enough succeeded, forming new legions who set out to join up with their free fellows.

As the year drew on, the disparate orc forces converged on the League city of Temeschwar still acting on the orders given to them by Thrace the year before. They created a massive encampment near the city where thousands of slaves were held. The city was well defended however and it was clear that they lacked the numbers to take it so they pushed north into Varushka intent on surviving the winter there as they had done the year before.

It was there, that Emperor Ahraz of the Brass Coast made contact with them, initially via contacts cultivated by Freeborn merchants, and later in person. While the Empire tends to take a dim view of Ahraz, the orcs mostly speak of him as a man of great sincerity and passion who convinced them that he could not only save their people, but give them a purpose and a home. All they had to do was swear to serve the Empire and the Imperial Throne.

Several legions refused to accept Ahraz' offer - to join the Empire that had enslaved them - and even the Emperor could not ensure their safety. They headed into the Varushkan wilderness, and out of the Imperial Orc histories. Some were exterminated by the Imperial Armies, others were prey to monsters, and a few exist today as beleaguered bandit tribes.

Those who accepted Ahraz' offer marched along with his forces to Anvil, in a calculated show of force, to where the Senate was sitting. The Emperor presented the agreement to the Senate, and hours of frantic politicking took place. The Emperor's faction won the vote. Several far-reaching changes took place as a consequence; it became it illegal to keep orcs as slaves and those who swore to serve the Empire were accepted as Imperial citizens.

Citizens of the Empire

Acceptance of the orcs as citizens of the Empire meant the end of slavery. Those few orcs still enslaved were brought to the vast camps based near Anvil. Tents and provisions were provided but life in these refugee camps was crowded and dirty. As months passed these camps became the de facto home for the Imperial Orcs. The Civil Service made a great push to recruit orcs into the Imperial army; the discipline of army life suited the orcs and keeping their people together made it possible to exert leadership over them.

The years that followed also required each of the now-Imperial Orcs to take the Tests of Adulthood. They learned to read and write first from Urizen teachers, and then from each other. These were the first of the skills that the orcs had been denied as slaves, but others followed - metalworking, building, sewing - all had to be relearned.

Many orcs were keen to abandon the past and embrace the opportunity they had won for themselves as citizens of the Empire. The legacy of Thrace was to show the orcs that they were a people, and one that existed long before Ahraz made them citizens of the Empire - the orcs know that the Emperor did not make them one people, it merely gave their people a name.

News of the acceptance of orcs into the Empire brought renewed conflict with the barbarians on every border. Some of the Imperial Orcs claim that the invasions were launched with the intention of attacking them directly, but there is little proof to support this and the barbarians remained as divided as ever.

At first the Imperial generals were hesitant to use the orcs. Many believed that the Imperial Orcs would prove unreliable in battle, some openly questioned their reliability. The first Imperial Orcs took their places at a meeting of generals in 351 YE, and despite initial scepticism, they proved time and again what they and their people were capable of doing when fighting for the Empire.