At present there are just two Imperial Orc armies, although both are over-sized, roughly fifty percent larger than other Imperial armies. Plans have been mooted a few times for splitting the forces to create three armies, but the two armies were created when the orcs joined the Empire and have a long and noted history that few orcs are willing to give up - most take great pride in their army's achievements. Imperial Orcs are also aware that much of their political unity arises from the tight-knit nature of the armies and the legions attached to them and they are keen to prevent their loyalties being divided amongst too many armies and generals. Ultimately though the biggest consideration has simply been the practical costs involved in reforming the orc armies - the costs involved, the loss of efficiency as the armies are reorganized and the time in barracks required to complete the change.

The Orc generals face a number of difficult challenges. With no land of their own to defend, their troops are free to fight on any of the Imperial borders but this also robs them of political influence in the Senate. They are keenly aware that their military strength is their strongest advantage and that they must use it to the best advantage of the Imperial Orc nation, deploying their forces where they can bring the most benefit. While the most political capital might be accrued by going where the fighting is heaviest, this brings with it commensurate losses. Other nations are likely aware of the Imperial Orc desire for land, and the best Orc generals know they must be careful not to have their patriotism exploited to increase the influence of another nation at the cost of Orc lives.

The barbarian orcs harbour a particular hatred for the Imperial Orcs, often singling them out on the battlefield where possible. The Imperial Orcs have learned to use this to their advantage, exploiting the hatred the barbarians feel for their Imperial cousins to encourage them to make foolish tactical decisions. When fighting alongside the Navarr for example a legion may lure an opposing band of barbarian orcs into a prepared ambush, drawing the brunt of the opposing forces forward so the Navarr thorns can engage their flanks.

Although orcs strive to preserve themselves and their legion, cowardice is one of the most heinous of crimes – an act of self-preservation which threatens others. By contrast, the truest form of courage an orc can show is to give their life so that the legion can survive; it is difficult to become an ancestor if you fall before old age, and as this is the very zenith of orcish achievement, it takes a truly selfless orc to make the hardest sacrifice. Tales are told of such heroes, but they are always tinged with regret at the waste of life. Every orc that falls in battle is seen as a cause for sorrow, an early death prevents them from becoming an ancestor as well as diminishing the strength of the legions. 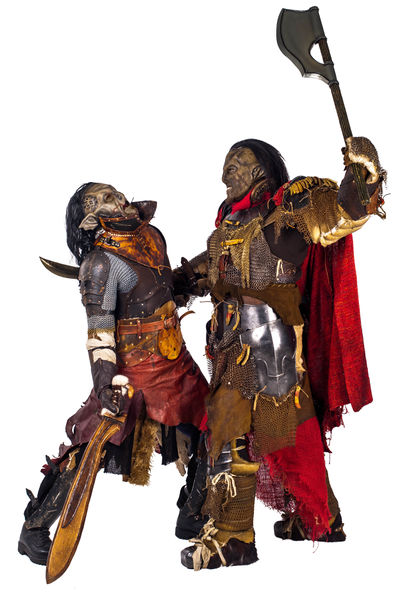 Pit-fights are a significant part of Imperial Orc culture, a revered practice that entertains and unites orcs in the Empire. Some individuals find themselves drawn to the experience of the pits, returning to fight there over and over. Some are drawn simply by the adrenalin of the experience, finding the roar of the crowd and the adrenalin of the challenge is too addictive to resist.

The very best are able to become professional pit-fighters. They trade on the reputation for skill and strength that they have built up in previous fights, until their notoriety means that other orcs begin to seek them out and actively challenge them. Most pit-fights are fought for joy of battle, some are fought to settle grudges and establish a rough pecking order. A professional pit-fighter can charge for the right to fight them because an orc wants to make a name for themself beating one of the best or perhaps because they want to learn something from the fight. The best pit-fighters are not just warriors, they are experts at working the crowd to a fever-pitch, so some orcs prefer to fight them just because the onlookers make the fight so much more rewarding. The taboos against betting on a pit-fight do not apply to making your own living from it - and the best pit-fighters are legends - at least amongst the orcs.

A few pit-fighters see their role as more than just a great way to make a living. Pit-fights are a deeply spiritual experience, for participants as well as for onlookers. The energy of the crowd, the adrenalin of the battle beckons to the ancestors and draws them closer. Many pit-fighters hear their ancestors urging them on during the fight and this experience is what drives many orcs to return to the pit over and over again. It is even more important for Imperial Orc shamans who need to commune with the ancestors and consult them to offer their guidance for the warlords.

As a result some skilled pit-fighters are closely associated with the shamans, working with them to decipher the wisdom from their words and determine what advice the ancestors are trying to communicate. These fighters see their job as a calling, they compete to make their battles as dramatic and exciting as possible, the better to allow themselves and the shamans to hear the voices of the past. Shamans often query fighters on what they heard, if anything, while fighting, but pit-fighters who emphasize the spiritual side of their calling will often ensconce themselves with the shamans for hours afterwards, working together to make sense of the ancestors' words.

The Imperial Orcs field two imperial armies; the Winter Sun and the Summer Storm. They are described in more detail here.