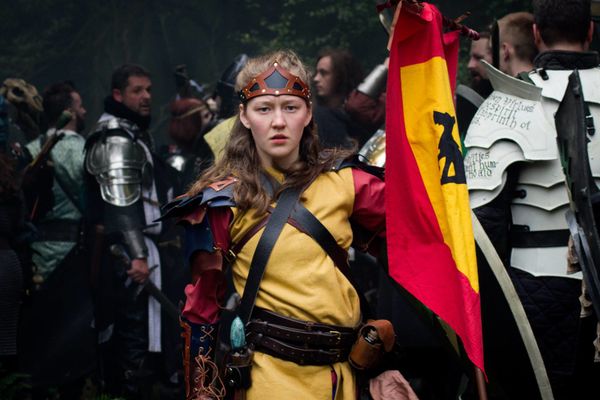 It's been a long time, but the armies of Dawn have returned to the Barrens.

Soldiers of the Pride! We return to the Barrens once more. Let us carve our way south through the Druj to give us the opportunity to support anywhere on the front we are needed. We assault Carmine Fields and seek to push through and rendezvous with Imperial Forces in Hope's Rest. Should we encounter less resistance than expected, then we assault Bitter Strand.

We march on the Carmine Fields to drive a causeway south that we may honour our loyalty to the people in Zenith. Let us push through the fields - a steady conquest towards our later goals.

Tancred, General of the Hounds of Glory

Glorious Citizens of Dawn, the time has finally come back into The Barrens. We go in song and virtue, in Glory and Love. We go to fight the Druj and drive them before us. Break them under our Grinding Advance. We try to punch through them to open a route to the south to connect Dawn to the south of the Empire. Allowing Dawn to join the Eastern Sky in Zenith to liberate it for Urizen.

It's been three years, more or less, since Imperial armies fought in the Barrens. Three years since Druj treachery saw the Towers of the Dawn fall, and the orcs of the Mallum spread their hegemony once again across the deep forests and the bloody fields. Now, the Empire has returned. From the north, from out of the Morass in Holberg, come the Golden Sun, the Gryphon's Pride, and the Hounds of Glory with their Varushkan allies, the Golden Axe. From the south, up through the Tarn Valley, out of Therunin, come the other Varushkan armies - the Iron Helms and the Northern Eagle. With them are the Wolves of War supported by a great many Varushkan wagon raiders and sell swords, as well as Temeschwari bravos keen to wrest some profit from the war against the Druj.

Their strategy is simple; to "cut the Barrens in half" by seizing both the Carmine Fields and Hope's Rest. If they can take both regions, then the Druj will find it difficult to hold Dawnguard, Murderdale, and the Heart of Peytaht. Their armies will be restricted to the eastern half - to Bitter Strand and Saltmarsh and the Untrod Groves; to the Bleaks and the Plains of Teeth.

Soldier we are needed south in Zenith. We march through the Barrens while our cousins march to meet us. We will Take the Land of the Druj We will make them suffer and bring freedom to Zenith

It is a risky strategy however, for any number of reasons. It requires the Imperial forces to establish not one, but two beachheads in the territory. Until one force conquers their target region, they will be unable to help the other. Each must contend with the defences of the Barrens alone. Worse, the entire territory labours under the influence of malign Druj magic. Not the familiar miasma of dread that infests other territories under the control of the Mallum orcs - but the equally familiar curse that infests all water in the territory with sickening, pestilential Spring magic. The rivers in the Barrens are choked with poison, and even water carried by the invading armies quickly acquires that slight crimson tinge that marks it as accursed. Injuries fester; wounds that might otherwise be serious but not life-threatening quickly drain out the life of those who do not receive immediate treatment.

The Empire has its own magic; the soldiers of the Gryphon's Pride and the Hounds of Glory fight with supernatural clarity that allows them to make and execute strategic and tactical plans more effectively. The Wolves of War - as always - find it easy to incorporate the mercenaries and independent captains that fight under their banner to their common cause. Those two thousand additional soldiers operate much more effectively under the guidance of the League captains than they might alongside any other armies.

And this season at least, it appears that the Imperial armies are the only ones in the territory. When the first Druj turn up - several thousand swift moving warriors with leather masks and curved spears - the initial assumption is that they represent a true army. It quickly becomes apparent that they are just the vanguard of the garrison of the citadel that rises in the east of the territory. The Towers of Dusk, as the Empire christened them long ago, were destroyed by thunder and lightning and the bravery of Imperial heroes. They have not only been rebuilt, but extensively reinforced. Cruel battlements, studded with spikes of metal and shaped bone, glower over the Plains of Teeth, and in their shadow nothing grows.

Iron Helms, we are not ones to sit and wait for progress. We march on the Barrens. We will rip and tear into the Druj. Our Merciless Onslaught upon Hope's Rest will make us the Hammer, and the armies coming from the North the anvil.

Alderei the Fair, General of the Iron Helms

Northern Eagle, we march to the Barrens. We must soften the pressure on our Urizeni Cousins, and we can see Dawnish Loyalty repaid. This will be a reunion, for we march with the Iron Helms to meet the Golden Axe in the Heart of the Druj. Greet them warmly as we all will have killed for this moment of kinship.

We must keep pressure on the Druj. Hit them where it hurts - in their homes and in their treasuries. Force the Druj to come north to face us and next season we can cut their legs out.

Gabriel Barossa, General of the Wolves of War

These Druj are further supported by the enchanted defences the orcs favour. The forests of the Barrens are fat with deadly insects of unnatural size. The trees are inhabited by hateful spirits drawn from the realm of Spring, and with dreadful beasts that strike from the shadows without warning to carry away anyone who strays within their reach. For the Empire, travel through any overgrown area is impeded - the vegetation shifts when there is nobody to see it - while the Druj move effortlessly through even the densest undergrowth.

If the forests are bad, the marshes are even worse. Scouts report that the stagnant pools and salt flats of Saltmarsh teem with stealthy flesh-hungry lizards, with pale lambent-eyed orc spirits that mesmerise the unwary and lure them to their death, with shifting quagmires, and with a dreadful low-lying fog that misdirects and confuses. Again, anyone who strays too close to marsh ground in the Barrens risks falling afoul of these night-woven protective enchantment.

There are over thirty-five thousand Imperial troops in the Barrens and while the garrison of the Towers of Dusk take every opportunity to use the advantage offered by their defensive enchantments, they are absolutely no match for the Empire. The problem for the Imperials is that they rarely if ever allow themselves to be lured into a open battle, striking suddenly and then melting back into the Untrod Groves and the Bleaks almost before the Empire's armies know they have been attacked. The weakness in their tactics is that they are only effective at slowing the Imperial advance, not stopping it. When a Dawnish soldier suddenly stumbles and falls, a barbed arrow sunk into their shoulder, there is a Varushkan physick at their side almost before they hit the ground. When a League scout falls afoul of a deadfall, there are two yeofolk on hand to drag them back to safety and ensure their wounds do not have time to fester.

It would be a different matter if the Empire was fighting in the woods or the marshes... but the Carmine Fields are fertile grasslands, and while there are plenty of wooded copses in Hope's Rest, a little caution ensures that they are unable to claim Imperial lives. The frustration of the Druj becomes almost palpable as the Summer Solstice nears; there are some deaths but casualties can be counted on the fingers rather than tallied in the kind of grim butcher's bill that is so often the price of war against the Mallum.

Despite their growing anger, though, the Mallum forces are still able to make the Empire fight for every foot of land. The rough terrain in the south slows the advance and while the strategies employed there are effective they are not ideal for claiming territory. While the Wolves of War plunder the Druj garrisons and strike against the scattered orc settlements in Hope's Rest and the nearby forests, the Iron Helms methodically make examples of every Druj warrior that falls into their hands. They are merciless, seeking every opportunity to trap and dispatch the orc warriors, and the Druj know it. The steady progress made by the Northern Eagle partially makes up for this splintered focus, but by itself it slowly becomes clear it will not be enough. By themselves, the three armies would have failed to claim Hope's Rest.

Fortunately they are not by themselves. The northern faction of the Empire's forces fight in open ground - the kind of fighting the Druj loathe - and the Dawnish armies remember this territory well. With the Gryphon's Pride and the Golden Axe in the vanguard, and with the Hounds of Glory and the Golden Sun grinding steadily forward, the Empire's advance proves irresistible. Defended camps are established across the region and then the armies continue to push. The Druj defenders are caught between an anvil to the south and a steel hammer from the north and left with the choice of being crushed, or retreating.

As the days become longer, and the nights become shorter, and the Summer sun rises triumphantly over the forests of the Barrens, the soldiers of the Northern Eagle and the Golden Axe greet one another in the foothills of northern Hope's Rest. The Druj have failed; Empire has driven a steel causeway right through the centre of the Barrens.

The Empire's risky strategy has been successful. The Imperial forces have conquered the Carmine Fields and Hope's Rest. As per their stated intent, this means any of the armies in the territory at the moment can leave to either the north or the south - into Holberg or Therunin - should they wish to do so.

The only Druj forces in the territory have been those provided by the eastern fortification and the enchantments they raised in the woods and marshes. As a consequence, despite the presence of the Rivers Run Red curse, there have been no appreciable casualties among the Empire's armies.

Two of the armies involved in the assault undertook particularly notable orders. The Iron Helms have undertaken a merciless assault in the Barrens; this strategy is obvious both to their Imperial allies and to the orcs of the Mallum. The Wolves of War have undertaken the plunder action; the general will receive the gains thereof in their pack prior to the event.

As the Water's Dripping Down (Battle)

During the Summer Solstice, it seems that there is a major conjunction connecting the Sentinel Gate to the vicinity of Dourfell Keep in the Barrens. Details are light at the moment but it appears it will allow access to a Night regio that, with some preparation, the Empire might be able to manipulate to perform some powerful enchantments or curses that could effect the Barrens. Perhaps more significantly, there is also an opportunity to secure the Imperial presence in the Barrens - whether the Empire's armies intend to remain or not - and possibly even to mend some broken fences and cement an alliance aimed at liberating the Barrens from the Druj once and for all.