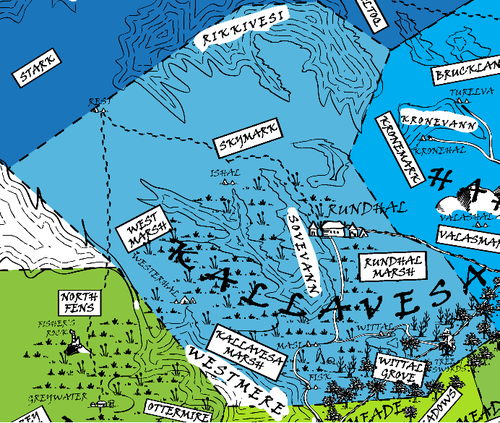 On the shores of the Westmere stands Westerhal, home to the small fleet of Kallavesi boats that keep the coast safe from Jotun raiders. Its importance has slowly dwindled, in part due to the rise of Meade in the Marches which has much better access to wood and stores, but the patrol ships of the Marches are uncommon this far north. Once it was the second settlement of Kallavesa, and there are residents who would like to see it take its place again as a center of trade and defence of Wintermark - perhaps with a new fortification.
Keywords: Marsh

The Plants of Kallavesa
The Kallavesa swamps are home to many rare and unique forms of flora and fauna that are below our abstraction layer in the sense that they are important to the Kallavesi mystics, but not important enough to be one of the five herbs. While many of these herbs have useful properties, they are very much along the lines of headache treatments or gentle sleeping draughts, rather than purifyication of an envenomed wound or repairing a crippled limb. Other examples might include tobacco, for example, or flavoursome herbs used in cooking, as well as mild narcotics.

One possible opportunity these herbs present is for a character who wants an unusual or distinctive farm or business. Likethe herders you could define your business as trading in medicinal herbs, or your farm as growing minor medicinal plants - indeed it is easy and appropraite to diversify a farm to include some of the potent herbs produced by a herb garden.
Retrieved from "https://www.profounddecisions.co.uk/mediawiki-public/index.php?title=Kallavesa&oldid=38266"