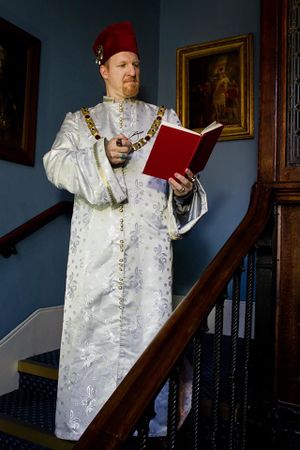 Quite apart from the spiritual power it grants, a Labyrinthine Vestment
can also be a visible sign of wealth and influence.

A labyrinthine vestment is a sturdy robe or tunic, often with a hood, that allows a priest to use significantly greater amounts of liao when performing a spiritual ceremony. Through use of one of these robes, a lone priest can greatly increase the strength of their ceremonies, either to create a powerful and durable aura, a lasting excommunication or testimony, or to overcome or exorcise a potent malignant spiritual aura or curse.

Quite apart from the spiritual power it grants, a Labyrinthine Vestment also represents the investment of dozens of ingots and measures. A set of Labyrinthine Vestments are significantly more expensive that a Wayfarer's Robe, and thus more likely to be worn by a powerful and influential priest of the Imperial Synod than a mendicant adventurer.

The traditional design for one of these garments is a simple robe of a single colour covered with intricate weltsilver-and-orichalcum embroidery in the form of swirling or angular maze. This design is by no means universal however. In the League it is commonly called a cardinal's robe or bishop's robe - and rather than subtle embroidery the artisans who weave them often go out of their way to stress how valuable the robe is and how prestigious the wearer is. Some priests of Prosperity and Pride see ownership of one of these glorious garments as a sign of their virtue, taking inspiration from the item itself; others view it as a powerful adjunct to their ceremonial abilities. Both schools of thought can appreciate the beautiful dyes, sumptuous fabrics and precious metals that augment and ornament the splendid vestment.