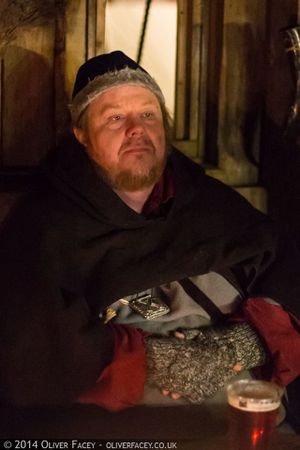 Landskeepers are responsible to the Marcher people as a whole.

A landskeeper is anyone who uses magic to support the nation as a whole and Marcher traditions in particular. Landskeepers can use a variety of methods, besides hearth magics and rituals, to do this. Some landskeepers technically lack any real magical ability at all, using traditional rites and offering good advice and aid to the Marcher folk. Someone who advises on the effective order to rotate your crops, what herbs to use to bring a pregnant pig to term, or where to place a bushel of wheat to keep out evil spirits, can be a landskeeper, whether or not they also employ magic.

The landskeepers support the Marcher armies in wartime, providing magical enchantments to protect and empower the soldiers of the Marches, as well as healing the injured. Landskeepers act as they will in the service of what they perceive as the greater good, and they have a great deal of freedom to take unpopular action.

Many landskeepers use curses to deliver appropriate punishments to those who they think have transgressed against Marcher traditions. Even the Stewards are not above the judgement of the Landskeepers in this regard, and a few powerful households have been brought low by Landskeeper curses after they adopted airs and graces or other foreign ways.

Finally, landskeepers deal with the Eternals. Most have a deep suspicion of these creatures, which have complex and inscrutable agendas of their own. Most prefer to deal with the Heralds, the human-like servants of the Eternals with whom it is easier to reach a compromise or mutually beneficial accommodation. Places where Heralds appear are often marked with standing stones.

The vast majority of Landskeepers keep a certain amount of distance from other Marcher folk. They view the Marches as their charge, and their ultimate responsibility is to the Marcher people and traditions rather than to any individual or Marcher household. When landskeepers do associate with households or market towns directly it is always in pursuit of their own agenda. Many real landskeepers have little time for hedge wizards, magicians at the beck and call of a steward.

At a few points in Marcher history, there have been so many landskeepers that they have formed three or four distinct circles, with each coven taking responsibility for a single territory. More usually landskeepers come together to form a single coven, the better to ensure that their voice is heard through the Marches. Part of their strength, and their ability to operate as they see fit, comes from their control of the magical monoliths that stand throughout the territories. In addition to strengthening the landskeepers, these great stones anchor powerful enchantments that enhance the fertility of Marcher soil. Households who oppose the landskeeper circle risk losing their magical support and even their very prosperity.

Sadly many landskeepers lost their lives in the catastrophic battle that saw the death of Empress Britta in 376YE. Much of the lore concerning the Marcher standing stones was lost with them and the prestige of the landskeepers has waned accordingly. It remains to be seen if a new generation of landskeepers will be able to restore their power and influence.

The landskeepers do not look well on the new fashion for market towns, a departure from the old ways that the majority have opposed at every turn. The aldermen of the market towns tend to have little appreciation for the work of the landskeepers, and their politically protected status makes them hard to influence. In the past, some landskeeper circles have reached an accommodation with the market towns, but these are usually cautious and shaky associations. 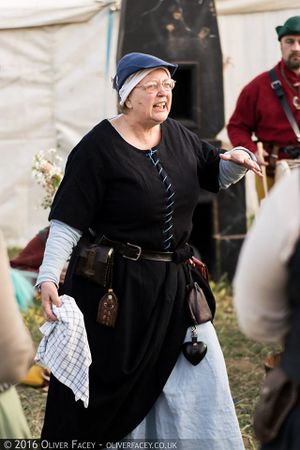 Landskeepers sometimes seem to spend half their time wrangling folk.

The landskeepers are intended to allow players to play Marcher ritualists who also have a significant role in the politics of the Marcher nation, if they wish. Landskeepers are great characters for anyone who is considering attending the event by themselves or as part of a small group. It is perfectly acceptable to play a Landskeeper who isn't a ritualist or even a magician. A landskeeper might be a physick or skilled with potions and herbs, or you could consider playing a blacksmith who is a capable artisan. Being an effective landskeeper is about your characterisation as much as your skills.

Landskeepers are usually born into a Marcher household, so you can still define your Marcher family as part of your background. If you want to be from an existing household, one played by current players, then it's worth contacting the group just to check they are happy with you doing that. Otherwise your character can be from almost anywhere in the Marches.

If you are creating a landskeeper ritualist, then it is worth considering leaving your choice of rituals open until you have had a chance to meet and talk with other landskeepers. A degree of cooperation is useful when choosing rituals to allow the characters to perform the rituals together effectively.

Anyone playing a landskeeper is well advised to seek out the other landskeepers once they enter play. Whether they have chosen to organize themselves into one circle or many, the power of the landskeepers derives from the degree to which they can work together. This is especially true when performing rituals, but their political unity is as important as their magical cooperation.

While they often claim to disdain politics, most landskeepers support the status quo and take the long view of events. In turn landskeepers who completely disrespect the households are striking against the fabric of Marcher society that they are generally assumed to be protecting. Part of their status derives from the way they place the good of the nation above all else, so the more unbiased you can be, the more power you are likely to wield.

The magic rituals that the landskeeper circle can offer are vital to other groups, so don't be afraid to use that to get what you want, but the more subtle you can be about it, the better. If you try to throw your weight around and expect other players to do what you say because "the brief says the Marchers respect the landskeepers" you are going to get nowhere. The landskeepers are supposed to be conservative but fair in their dealings with the households; you have to play that part of the Marcher brief to get other players to play theirs!

The landskeepers are written with a degree of hostility towards those ritualists and spell casters who are not landskeepers but have remained part of a Marcher household group. These characters undermine the power and influence of the landskeepers by offering the households a way to perform rituals without outside assistance. The landskeepers consider them to be hedge wizards, which for a group who view themselves as the guardians of Marcher tradition is meant to convey a degree of scorn and contempt for these dabblers. A good landskeeper character will rarely pass up an opportunity to demonstrate how much more effective at magic they are than a household wizard.

Ultimately though the respect the Marchers are supposed to have for the landskeepers is based on the fact that they put the Marcher traditions and the Marcher nation first. You can't expect other players to treat you as a landskeeper if you are very obviously just a ritualist who is part of an Marcher household group. If you want to play a ritualist who is part of a household group, it may be better to play that idea to the hilt, perhaps even a character who has rejected the role of the landskeeper in favour of remaining loyal to their household.

It is also worth noting that the landskeepers consider the welfare of the Marches more important than that of the other nations that make up the Empire. In a dispute between a Marcher household - or even a Marcher market town - and the Imperial Synod, for example they will almost certainly be staunch supporters of their fellow Marches regardless of what outsiders might decide is "good for the Empire." This can be a great excuse to be stubborn, and help other Marcher players resist the temptation to compromise with outsiders.

These magical Marchers draw on a number of sources for inspiration. They are as much inspired by the cunning folk of European history as the obvious fantastic characters such as Pratchett's witches.