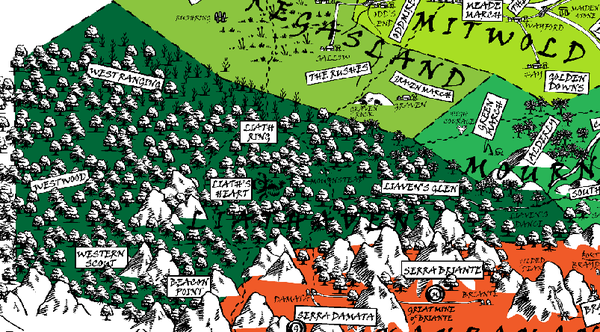 Liathaven is the ancient western forest between the Freeborn mountains of Kahraman and Bregasland of the Marches. Even in the time of Terunael, the forest was old. There are immense trees in parts of Liathaven that are believed to be thousands of years old, and parts of the forest that even today have seen only a handful of humans pass through them. Liathaven itself is only a spur of a much larger forest that stretches hundreds of miles to the west; a great wood that served as a natural boundary between the Jotun barbarians in the north and the Faraden foreigners in the south.

The wildlife of Liathaven likewise tends to be larger than normal, with forest lions and dire beasts (especially bears, wolves and stags) being comparatively common compared to other parts of the Empire. The weather in Liathaven is changeable, and the territory is known for its heavy storms and strong winds, caught as it is between the temperate Marches and the warmer Brass Coast to the south.

Most parts of Liathaven have been well-settled by the Navarr - those few Terunael ruins that have not been incorporated into steadings have mostly been studied by scholars and archaeologists - but occasionally a hitherto overlooked structure will be found, wreathed in vines or buried under centuries of undergrowth. The richest new ruins are found along the borders of the Vallorn-infested regions of Liath's Heart and Westwood, of course.

Many of the Striding that walk the Trods around Liathaven are composed of some of the more militant members of the nation, who will stop at nothing to recover their homeland from the Jotun. In Liathaven the Duskbourne Striding have traveled from around the Empire to reclaim Liathaven to make it their new home. The Pathfinder Striding sold on all their goods to fund the military units that they use to support the Liathaven resistance. Many of the Stridings in Liathaven such as the Y'Basden, the Companions of Tarw and the Keepers of the Way have formed the Black Scar, who spend most of their time organising the resistance to the Jotun in the region. Y'Basden in particular have been active in the defense of the remaining Navarr.

The Jotun began their invasion of Liathaven in the autumn of 346YE, taking advantage of the eastern-focus of the Imperial armies under the domination of Empress Giselle. They pressed ever eastwards, avoiding the vallorn and seizing many Navarri steadings. The Empire finally lost control of Liathaven in early 349YE despite attempts by the Imperial Military Council to organize a proper counter-offensive.

In the thirty years since the forests fell to the orcs, they have used their foothold here to launch regular raids into Bregasland, and as a staging post for their massed assault against the Mournwold in 349YE. Today, apart from regular raiding bands attacking the Marchers and the occasional forays through the mountains into Kahraman, Liathaven seems quiet - almost peaceful. Despite a slight rise in encounters with vallornspawn, the pessimistic predictions that the Jotun would 'awaken' the Vallorn in Liathaven and cause widespread doom in the territory has so far failed to come true.

With a ceasefire agreed with the Jotun by the Imperial Senate in Summer 377YE, there have been no further attempts to reclaim Liathaven. When the Empire broke the ceasefire early in Autumn 378YE the armies of the Brass Coast tried to take Liathaven, but the Jotun attacked with seven armies taking all of the territory that was not controlled by the Vallorn.

Woven between the trees of Liaven's Glen is The Dance; a network of earthen trails marked in the grass and the trees, several miles wide, worn into the ground with the footfall of centuries. The Navarr say that it is a symbol for the Great Dance writ large on the earth. Some from Urizen believe that dancing Liaven’s Dance could grant humans a greater understanding the path of the soul through the Labyrinth of Ages. The steading of Liaven’s Dance was ancient, dating back to the earliest days after the Vallorn emerged. It was a regular place of pilgrimage for Navarr practitioners of the Way, and a centre for philosophical thought combining the philosophy of the Great Dance with the Virtues. The fact that it is now in the hands of the Jotun barbarians marks a terrible loss for the Navarr and perhaps the Empire. 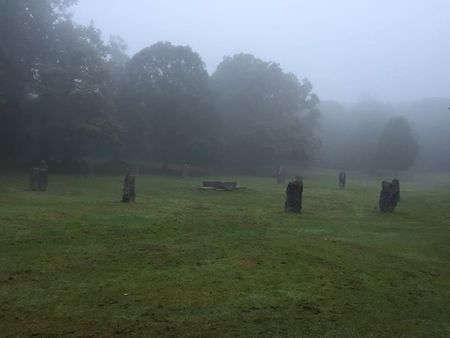 The Stout Watchers, a circle of stones in Liath's Ring.

The region takes its name from the great beacons built along the southern borders of Liathaven, intended to serve as a warning of any major incursion from the west or the southern Faraden. The beacons are simple but effective - basic messages could be sent quickly to stations in the mountains of neighbouring Kahraman, and relayed back to Liaven's Glen. In this way, the southern regions of Liathaven stayed in contact with the northern regions despite the Vallorn between them, and the presence of some bloodthirsty clans of bandit orcs in the mountains to the south. Today, Beacon Point maintains a single very unreliable trade route through the mountains to Kahraman. Travelers and caravans alike are in constant danger from the vicious peak orcs, and communication with the defenders is very patchy as a result. This has made the plight of the Beacon Point steadings more desperate - their resources are stretched even further by the need to support the steadings of Western Scout. In Winter 379YE a large force of Jotun troops took Beacon Point.
Keywords: Forested

Forced out of the surrounding regions, the Vallorn has grown powerful in Liath's Heart. It is wrapped tight around the ruins of Liath Haven, squatting at the centre of a miasmic cloud of poison. There are no Navarr steadings in Liath's Heart. Although occasional forays into the region from Liaven's Glen to the east returned triumphant with some fragment of lore or lost treasure, the most accessible ruins have long since been explored or destroyed by rampaging Vallornspawn. With the Jotun in northern Liathaven, the Vallorn is said to be stirring fitfully in its slumber - but there have been no signs to date that the Jotun are making any particular effort to 'conquer' it.
Keywords: Forested, Vallorn

Near the eastern border of Liath's Ring stands Mournstead, a stout steading - the last redoubt of the Navarr in Liathaven to fall to the barbarians. The region was known both for sprawling groves of beggarwood trees, and for the occasional standing stone or dolmen in out-of-the-way places. Marcher Landskeepers - especially those from nearby Bregasland were regular visitors to this part of the forest, and its eerie monoliths. Rumour suggests that the first action of the orcs was to cut them to the ground and bear away the trunks for their victory bonfires, but calmer heads suggest it is much more likely the Jotun will have set their own thralls to harvest the groves for valuable Beggar's Lye.
Keywords: Forested

This area of eastern Liathaven was the first area of Liathaven freed of Vallorn influence some two hundred years before the foundation of the Empire. According to some records, the network of trails and earthworks known as Liaven's Dance was a prototype working designed to weaken the power of the vallorn, eventually culminating in the vast web of trods that now criss-cross the Empire. Several steadings here were home to experienced covens of vates who oversaw potent mana sites and studied the vallorn along the edges of Liath's Heart to the south-west. Many of these vates were killed fighting to protect their homes from the orcs, but some managed to flee into exile. The Dancewalker Striding was formed of members of the steadings at the Dance who swore to walk the trods here until Liathaven was back under Imperial Control.

Of particular note is the library at Turning Spiral. This old steading held a repository of Navarr magical lore that survived the purges of Emperor Nicovar comparatively unscathed. Tragically, its own defenders were forced to destroy it rather than let it fall into barbarian hands. While some of the books were carried to safety by fleeing vates, many hundreds more were incinerated in magically-fuelled fire as the entire steading was transformed into a conflagration by the defenders (a conflagration that claimed not only their lives, but the lives of at least two hundred orcs). Some of the last vates to leave Turning Spiral never reached the safety of Serra Briante to the south - at least two groups are known to have set off but disappeared somewhere in the mountains between Liathaven and Kahraman.
Keywords: Forested

The tainted vegetation of the Vallorn spills westward into this region from Liath's Heart. There were a few steadings here, but they have been abandoned due to the twin threats of the vallornspawn and the Jotun barbarians raiding from the west and north. The last steading abandoned to the vallorn was that of Duskwater Tarry, a steading built on raised platforms in the centre of a freshwater lake that protected a dangerous direct trade route between Western Scout and West Ranging. The inhabitants withdrew south in 352YE and it is believed that the vallorn swiftly swallowed it up as it had other abandoned settlements. The entire region now belongs to the Vallorn.
Keywords: Forested, Vallorn

The forests here were reasonably well defended, but the slow drain of Thorns to the battles in the eastern Empire created a weakness the Jotun were quick to exploit. Before the barbarians came, West Ranging was known both for producing fine leather goods and for the Navarr scouts who would regularly slip out of the Empire to spy on - and occasionally raid - the Jotun stockades in the western forests.
Keywords: Forested

The steadings of Western Scout still hold out against the Jotun, but there have been several serious assaults from the forests west of the Empire. In the last few years these attacks have slackened off, but until 377YE there were still occasional raids by Jotun warbands. The Jotun ceasefire has given these steadings a much-needed breathing space. In addition to the Jotun, there are problems with groups of Vallornspawn that occasionally boil out of the infested regions to the north. The westernmost steadings are in tatters; several have been razed by raiders, while the easternmost steadings are barely in a better state. They survive partly due to the efforts of their hunters but also due to vital supplies from Beacon Point - supplies the eastern steadings can hardly spare themselves, given the problems of maintaining a safe route through the mountains to Kahraman. In Winter 379YE a large force of Jotun troops took Western Scout.
Keywords: Forested