Performing this ritual takes at least 2 minutes of roleplaying. At the end of the ritual one of the contributors is chosen to deliver the curse with a pronouncement of doom.

This ritual creates a curse that is delivered to a target with a pronouncement of doom: one contributors is chosen to deliver the curse, and they must do so within fifteen minutes or it falls on their own head. 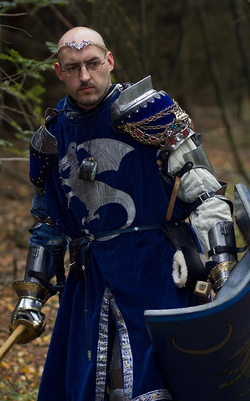 The Dawnish may not concern themselves
with matters of money... 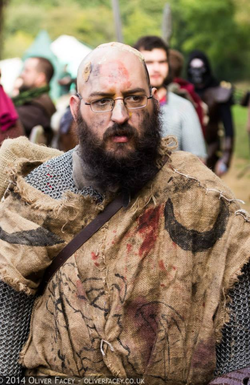 ... but the curse still leaves them shabby and desperate.

While under the curse, the target experiences a powerful roleplaying effect; they find it difficult to hold on to money, and valuables slip out of their grasp. They become increasingly shabby in appearance and often find it physically difficult to hold money or other Game items without dropping them. They have a nagging awareness of every disaster or misfortune that might ruin them, their possessions or their prosperity.

In addition, circumstances conspire to cause the character to lose their valuables; thieves, unfortunate disasters, misplacing a jacket, unexpected bills, holes in the pockets and the like. While under the curse the target loses three-quarters of any production that would have been provided by a personal resource, including that provided by a military unit, and the liao provided to a character who controls a congregation.

The additional production provided by an enchantment such as Rivers of Gold or Rampant Growth, a character's basic income of 18 rings, and the production of campaign resources is not affected by this curse.

The curse can be removed by certain powerful creatures or items. It can also be alleviated by powerful rituals that improve fate and chance.

This horrible curse slowly erodes the wealth of the target. Their resources fail them, their clothes become threadbare, and they are constantly aware of the vagaries of fate that may rob them of their security, prosperity and comfort. They can receive temporary respite from the curse through the use of enchantments that enhance their resources, but slowly and inexorably they are paupered unless they are very lucky.

Some targets have attempted to argue that this curse is tantamount to theft, and have ritualists prosecuted accordingly. Magistrates will not treat this as theft, however, because it technically does not steal from the target; it makes it harder for them to acquire new wealth, it only peripherally damages wealth they have already got. The recourse of the target is to the Imperial Conclave, not the judiciary.

In some parts of the Empire, this curse is called Miser's Ruin - especially by the mountebanks of The League and some itinerant volhov and Marcher cunning folk who view its imposition on the greedy, the avaricious and the cruel to be naught more than poetic justice.

Several eternals of Autumn are known to have the power to remove this curse - and to deliver their own variants of it - especially Prospero and Ephisis. Unfortunately, neither is inclined to alleviate the effects without a suitably impressive payment - which is made much harder to arrange by the nature of the curse.

As with many curses this ritual often involves a recitation.of the grievances against the target; casting aside coins or items symbolising wealth, especially fine wine mixed with blood or spit that is poured out onto the ground. The rune Naeve is an obvious fit for this ritual, and the rune Pallas is often destroyed or defaced during the casting; Ull and Gralm may also be evoked, representing the power of chance and fate that work together to enact the ruinous curse.