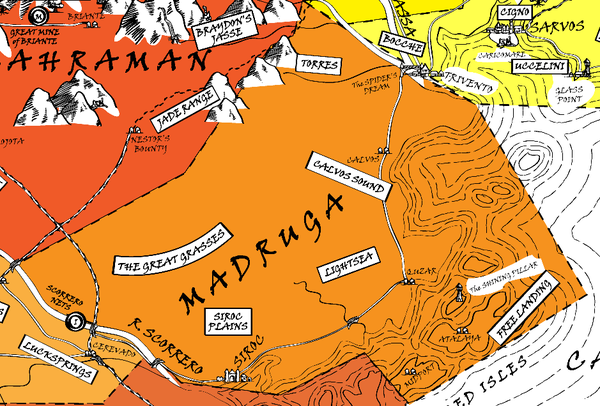 Madruga of the Jewelled Isles is the easternmost territory of the Brass Coast, running from the Kahraman mountains down to the Bay of Catazar. Down the coast of Madruga and Feroz the corsairs and merchantmen raise their sails, running goods to Bastion and Sarvos, trading with foreign powers, and fighting off barbarian incursions.

It is the most densely settled of the Freeborn territories; the nation began here, with the landing of the three sisters and their families at old Atalaya. Over generations, their descendants spread across the mainland building and cultivating, until Madruga was tamed. Today, it is scattered with villages and small towns - the sprawling city Siroc even rivals the cities of the League in size and wealth.

It is the spiritual home of the corsairs; many maritime families have lived on the islands of Free Landing and Calvos Sound since the earliest days of the Freeborn nation.

Madruga has not always been peaceful, however. The Grendel have attacked the islands and towns here for centuries; usually their fleets are intercepted at sea before they can do too much damage, but there have been times when their raiders have sacked coastal settlements. For a few harrowing months in the years before the foundation of the Empire, the Grendel swept inland here conquering Lightsea and the islands, and threatening to burn Siroc. They were turned back after months of vicious fighting, but the memory of their attack is sometimes credited by historians as being a factor in the decision of the Freeborn to join the Empire.

After the Autumn Equinox 381YE, the Grendel armada invaded Madruga. They destroyed the Freeborn Storm, burnt the Atalya shipyards, and brought the Black Thorns to the brink of annihilation. Their forces then moved against Lightsea, raided the port of Quzar, and within short order half the coast of Madruga was in their hands.

The Sapphire, the City of a Thousand Sails, is acknowledged as the pre-eminent city of the Freeborn. It lies in Madruga close by the border with Feroz. Brightly coloured tents extend Siroc out far beyond the small cluster of stone buildings that make up the heart of the city. Sails of all shapes and sizes fill the sheltered bay, which is guarded by a series of iron woven nets and chains bought at great expense from the forges of Wintermark. The city is said to have been founded by the Guerra family shortly after the Freeborn came to the Brass Coast.

The Commonwealth Embassy is located in Siroc. It consists of several buildings built after the severe Commonwealth style, which stand in beautifully laid out and maintained gardens, surrounded by a low white granite wall. Despite the severity of the architecture, the embassy is surprisingly welcoming - the gates stand permanently open, albeit under the watchful gaze of a cadre of Commonwealth soldiers attached to the ambassador. The majority of the staff are human, although there are apparently half-a-dozen orcs whose role on the ambassadorial staff is not clear. There are no daeva citizens working at the embassy as far as Imperial observers can make out.

The town of Atalaya in Free Landing marks the place where the Brass Coast was born; the first landing of the three sisters and their families. Built around the side of a secluded cove, the seas around the island that share its name are a navigational nightmare. Before the Shining Pillar was built, reaching the hidden docks of Atalaya was a feat to tax the most skilled ship's crews. Today, the landwards channel has been widened but is protected by hidden obstructions that only the Freeborn pilots know well.

Atalaya is the oldest Freeborn settlement in the Brass Coast, but its prominence was eclipsed centuries ago by Quzar. Today, it is a place of pilgrimage for many Freeborn followers of the Way - there are a number of shrines and temples dedicated to Pride and Vigilance here. It is also known for its deep natural harbour - many ships of the Freeborn fleet count Atalaya as their home port.

An elegant bridge spans the river Vassa here, connecting Trivento to the Brass Coast. It is a marvellous piece of engineering that resembles a spider's web. There is a toll to pay, or you can take the long way around. Unfortunately, time has not been kind to the Spider's Dream. Resources initially used to maintain it were siphoned off in the time of Emperor Walter, and the bridge became increasingly dangerous to cross. In Spring 377YE, however, the Imperial Senate took steps to ensure its restoration to full functionality - reinstating the Imperial Title of Spider's Tollkeep in the process and heading off potentially unpleasant implications for the people of both Sarvos and Madruga. In Spring 380YE, Grendel orcs attached to the forces involved in the sack of Sarvos made an attempt to take advantage of unusually high flooding in the river as part of an attempt to destroy the bridge entirely, cutting the Freeborn territories off from the rest of the Empire. They were stopped by the brave action of Imperial heroes, and the bridge preserved - and along with it the ability for armies to pass from the south-western Empire into Sarvos and Tassato, and vice versa.

The Lyceum was established during the reign of Empress Aenea on an island east of Siroc. It is a centre of arcane learning in the Empire, and the Dean of the Lyceum maintains sumptuous apartments here. Approach to the island is carefully controlled by the magicians and professors, and the most promising magicians are invited to study or teach there.

Following a motion at the first Imperial Senate session in Winter 376YE, work began to expand the docks of Atalaya. Under the guidance of Miroslav, Senator for the League city of Sarvos, many wains of white granite and weirwood were committed to building both a massive seawall, and a great Imperial shipyard equipped with drydocks, powerful cranes for loading and unloading, and expanded warehouses and work spaces. Completed shortly before Autumn 377YE, the shipyard provided significant benefits to the Freeborn ships based in Madruga. In addition, the facilities here proved sufficient to allow the construction of the first Imperial navy since the days of Emperor Barabbas; work began on constructing Freeborn vessels in Winter 378YE.

It is perhaps fitting that when the Grendel invaded Madruga after the Autumn Equinox 381YE, and destroyed the shipyard the Freeborn Storm was put to port and shared the same firey fate as the docks where it was created.

With encouragement from the notoriously sea-averse Faraden, a grand highway connects Siroc with Calvos, cutting across the territory rather than following the coast. A shorter road runs along the northern banks of the Scorrero, crossing just north of Cerevado in Segura via a beautiful arched bridge of white granite. While the road is used extensively by the Farden, it also serves to cut the journey time from the northern borders of Madruga to the trading city of Siroc, making it a popular route for Freeborn and League merchants as well.

The south-west roads are a great work that complement the already existing Blood Red Roads, bringing increased prosperity to the owners of farms and businesses in Madruga.

Quality: Coastal
The town of Calvos stands on the shores of Calvos Sound. The slopes outside the town are rich with grapes, and the fine wines produced here travel all over the Empire. Even the sommeliers of the League pay well for a Calvos vintage. The Exemplar Zemress i Ezmara i Erigo was born here towards the end of the second century YE, and her ship The Kraken's Bane is housed at a special dry dock here, a destination for many pilgrims of Prosperity - even those from as far afield as the Sumaah Republic.

Quality: Coastal
The sprawling islands that form the region of Free Landing are diverse and well-settled. The islands here were the first home of the Freeborn - the town of Atalaya marks the spot where the Brass Coast proper began. The waters between the islands have a reputation for being treacherous and difficult for foreign captains; during the reign of Empress Aenea the Empire built a great lighthouse here called The Shining Pillar. This massive white-and-gold tower is one of the most prominent landmarks in the Empire often adopted by Freeborn sailors as a symbol of the Brass Coast as a whole; when they can see the beacon of the Shining Pillar, they know they are home.

When the Grendel invaded Madruga in Winter 381YE, they looted many precious relics from the town of Atalaya and burnt the shipyard there to the ground. In the process they destroyed the Freeborn navy, the Freeborn Storm.

These fertile plains are sometimes called the Emerald Sea; and the nomadic families who live here the Corsairs of the Emerald Sea. The inhabitants have a reputation for being a little more insular than is typical of the Brass Coast. They own large herds and mostly keep to themselves except when they visit the towns of Siroc Plains, Lightsea and Calvos Sound to sell their animals. There are no permanent settlements of significant size on the Great Grasses.

Quality: Coastal
A well-settled region known for the friendliness of its paradors. The largest settlement here is Quzar, a bustling port town of white towers and stained glass that is sometimes described as the soul of the Brass Coast. The Towers of Quzar are known as a gathering place for hakima from all across the nation - an annual "council" meets here every midsummer to share knowledge and gossip.

Many of the coastal settlements here were plundered by the Grendel during their incursion toward the end of 381YE. Quzar in particular was hard hit by the orc raiders, with some damage to the town and significant damage to the wealth of the citizens.

Quality: Coastal
The plains around the city of Siroc are scattered with small villages and threaded with well-maintained roads. The Lyceum stands on an island off the coast here and contributes to the reputation of this region as the beating heart of the Brass Coast.

The northernmost region of Madruga, and one end of the Spider's Dream. The land here is a little more rugged than in the southern regions, and the climate is generally cooler. The people who dwell here share some of the reputation of the miners of Kahraman; as being suspicious and quarrelsome. Partly this reputation might be a result of regular clashes between Freeborn traders and League merchants out of Sarvos. A regular 'problem' for the inhabitants is that League merchants would prefer to travel south to the more prosperous towns of the eastern coast to sell their wares, bypassing the markets of Torres. It is shameful to admit, but there are more incidents of brigandry against League caravans in Torres than in almost any other area around the Bay of Catazar. When such incidents get out of hand, the Spider's Tollkeep is often prevailed upon to sort them out.