Mask of the Mountebank 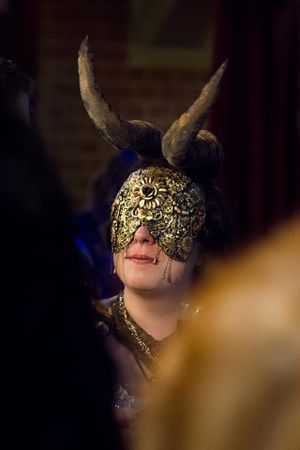 The Mask of the Mountebank challenges assumptions about identity.

The Mask of the Mountebank empowers a ritualist with the ability to change someone's appearance through the power of the Twilight Masquerade. The ritual is often used to grant the outward features of a lineage not the target's own - or to disguise and conceal lineage features granting the recipient the appearance of an unlineaged human being. The ritual is often employed in the creation of magical disguises, but also sees some use as a form of entertainment - especially in the League and some parts of Dawn.

With one of these masks, even a reasonably inexperienced practitioner of Night magic can perform the ritual without the assistance of a coven, provided they have mastered its intricacies. Furthermore, even a small coven equipped with several of these masks finds it relatively straightforward to enchant several individuals at once which can prove extremely valuable if time is of the essence.

The mask also provides the bonded wearer with the ability to employ iridescent gloaming in place of the expensive crystal mana normally required to enact the ritual magic. A ritualist wearing the Mask of the Mountebank often supplements their ritual performance by literally painting new faces onto their subject using the valuable pigments.

These talismans are often crafted as a harlequin mask, a domino mask, or as a full-face mask depicting the dramaturgical persona of the Mountebank or (despite the common name), the Witch. Occasionally one of these magical foci may be encountered in the form of a Charlatan's Periapt, a jewel which tricks the eye appearing different from varying angles; or as a Facedancer's Veil - a severe white veil that shrouds the head and shoulders of a Highborn magister. Regardless of form, the mask often incorporates either the Rune of Secrets or the Rune of Transformation.

Oh no, there are no briars here, no siree.