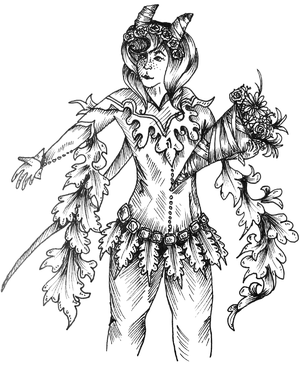 The Mountebank's Guise is a suit of magical clothing infused with a little of the power of the dramaturgical persona of the Mountebank. A ritual magician who wears this clothing can draw on the power it contains to empower their ability to perform Spring magic. In addition to providing additional magical power, the robes also infuse the wearer with some of the personality of the Mountebank.

The Mountebank is a complex figure in magical dramaturgy. This raiment draws on the power of that persona as an agent of vibrant, energetic change, and unrestrained power. By harnessing this irrepressible energy, the Guise allows a trained ritual magician to tap into a wellspring of power when working Spring magic. As a magical raiment infused with dramaturgical power, the Mountebank's Guise allows a bonded wearer to tap into some of the potent archetypal magical symbolism of the Mountebank, strengthening their will to act and urging them to seek out opportunities to use their power to its best advantage.

The raiment itself is usually woven from hard-wearing cotton or linen, carefully bleached and dyed in vivid, contrasting colours. The raiment often appears quite rich - it is intended as a dramaturgical costume rather than casual wear after all - with ambergelt and tempest jade decorations. The clothes tend to favour comfort and movement, reflecting the rough-and-tumble lifestyle of many Spring magicians. They are also often cut specifically to show off the physical attributes of the wearer - the Spring realm understands the power of the physical body to influence perceptions and subtly control social situations...

While the basic design is patterned after League fashions, it draws inspiration from the clothing of the street bravo or the Free Company, not that of the merchant prince that it draws inspiration from. Several other designs exist, inspired by other nations. The Troubadour's Guise for example, which combines elements of traditional Dawnish yeofolk garb with the vibrant colours favoured by many troubadours. The Woodcutter's Attire draws on Varushkan aesthetics, combining a vibrantly embroidered long coat with practical leggings, comfortable boots, and supple gloves - a design that has proved popular not only in Varushka, but also in the Marches, Navarr, Wintermark, and both Temeschwar and Holberg.

Any character can learn how to create this raiment following the normal rules - either by selecting the robe as one of their starting items, or learning it as an extra item pick. The only restriction is that anyone who knows how to make one of these robes must have spent a week or two studying at House Bourné in Sarvos - there is currently no other way to master the patterns which remain the proprietary knowledge of the Bourné guild.

"... and this alignment of the gloaming-treated weave with the weltsilver threads causes realm energies passed through them to seethe with puissant immanence, cascading a current of mustered will to enhance the breaching pattern that the magician uses to unpick the seam between worlds and draw forth a much more voluminous channel of energy to fortify and embellish the structure of ritual symbolism that they have threaded together."

There was silence for a moment when Horace had finished. Jack Greenwater licked his lips a few times, opened and shut his mouth once or twice, squinted at the bark on the back of his hand and then gathered all his courage and said:

Horace did not roll his eyes until he was behind the Marcher landskeeper, helping him into his new coat.
Retrieved from "https://www.profounddecisions.co.uk/mediawiki-public/index.php?title=Mountebank%27s_Guise&oldid=67841"