The ox is the foundation of a lot of wealth, They have been used as domestic beasts of burden for thousands of years. These relatively placid animals are used to draw ploughs and pull wagons, and are kept for their flesh and leather. They are excellent beasts of burden and what they lack in speed and gracefulness they more than make up for in dogged determination. A man on foot can catch an ox-drawn cart even if it has a fair head start (as many fugitives have learnt to their chagrin), but they cannot be matched for sheer ability to move heavy loads over great distances. Working oxen require shoes, usually made by blacksmiths, which are very different to horse-shoes and require a lot more effort to get onto their cloven hooves. 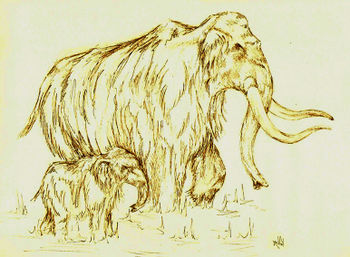 Tigers are native to the foothills of Urizen, and there are some prides of lions on the pampas of the Brass Coast. The forests of Dawn and Varushka alike are haunted by large, dangerous cats similar to overgrown mountain-lions or wildcats. These creatures tend to stay away from humans except in rare cases where one develops a taste for human flesh.

Drakes are large reptillian creatures that come in a variety of shapes and sizes. They are usually predatory, and while the majority are man-sized or smaller there are a few uncommon breeds that are larger than a man. They are unknown in Wintermark and Varushka and are most common in Dawn and the Brass Coast. They often possess savage jaws and tearing claws, and several breeds have horns or frilled collars that protect their necks. They are sometimes mistaken for dragons although they do not breathe fire and are unintelligent.

Drakes in Play
A large drake would represent a dangerous challenge for a single character, or even a small group, and is more than capable of terrorizing a farming village. A Dawnish test of mettle may have required the defeat of one of these creatures. Smaller drakes are more likely to be pack hunters. It is fine for your character to have fought or killed a drake. and the claws, teeth and hides of drakes are used in crafting or as trophies. While drakes are large, they are not behemoths. They evoke images of dinosaurs, there are no titanic tyrannosaurs or brontosaurs in the Empire - although such creatures may exist elsewhere.

While a hungry kraken can apparently be driven off with concerted effort, any vessel that suffers their attentions is likely to be badly damaged. There are no reports of anyone ever actually having killed one of these creatures.

The iridescent butterfly, a gorgeous insect with rainbow coloured wings that is uniquely active both during the day and at night. By day, the iridescent butterfly appears pale and drab – wings are usually white, ivory or light pastel shades. By night however, the true beauty of the iridescent butterfly is revealed – the wings become bright and luminous, shifting colour in seemingly random patterns, creating gorgeous displays in summer and early autumn as they dance among the twilight groves where their caterpillars feed. The butterfly does not prosper in the climate of the Empire and requires careful attention. It breeds most successfully in the Lands of Silk and Spice, where it is said that these creatures swarm in such profusion that they can transform night to day. The silk is spun from the cocoons of their caterpillars is used to manufacture Rainbow Silk, a strong thread that is valuable both for embroidered decorations and for making beautiful cloth. The thread is tough and hard to snap or sever, requiring steady application of pressure to cut making it highly prized.

Iridescent gloaming is produced from the remnants of the cocoons which are ground down to produce a thick waxy substance. Iridescent gloaming has an almost magical quality that allows it to take on different colours in the hands of a skilled artisan and is noted for it's use in creating exquisite embroidery, or as a colour wash for leather. It's peculiar magical properties make it a common component in items that use magic or produce magical effects.