A ship of Navarr timber, that is a ship to trust.

Brass Coast proverb
A common Navarr philosophy is that wealth is measured in the number of allies you have, not the coins in your pocket. Few Navarr have much interest in personal wealth. Trade is a means of making allies and ensuring that people have the things they need rather than a way for merchants to enrich themselves. The Navarr are well aware of the value of money and don't avoid its acquisition, it's just that most of them count allies as considerably more valuable than possessions.

Although the Navarr stridings are small, they play an important role in the Imperial economy. They specialise in moving valuable items, people and messages around the Empire. The Navarr may be the only people that some isolated communities see for months on end. From the earliest days of the Empire they acted as couriers, carrying important messages to far-flung places. They also act as guides, escorting individuals on difficult treks between nations.

Some Navarr choose to create a Wayhouse on the edge of civilized areas. Built along the Trods outside the Navarr heartland, the wayhouses are generally small - often no more than a single farmstead - and are maintained as places for travellers to rest and recuperate before continuing on their journeys. 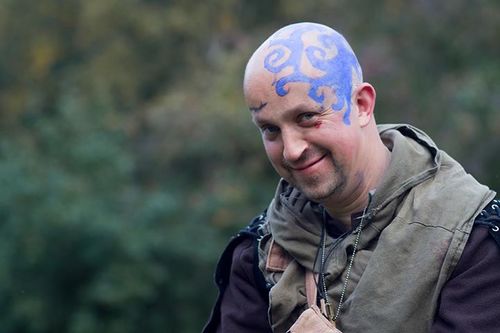 Like the Freeborn, the Navarr sometimes travel beyond the Empire's borders bringing back rare goods not found within its lands. The trade of dyes and pigments, spices and rare herbs is the what the Navarr are most commonly known for, but they also bring to the Empire unique flora from the deep forests that are especially prized by physicians and mages alike. However, for those rich enough, a ship or house built of Navarr hewn timber from the great trees of the heartwoods is a prize beyond reckoning. Across the Empire, Navarr-carved lintels and door frames are widely known for their properties of warding and defence. From dinner plates to spear-hafts, where timber is concerned the Navarr trade in the best.

The Navarr expect everyone to work in the best interest of their Steading or Striding.

Navarr who are interested in money often become brokers. A broker serves as an intermediary between a buyer and a seller, usually claiming some sort of payment from the deal. The Navarr are in a good position to prosper as brokers; as travellers they often come into contact with people with needs or a surplus they want to sell. Clever brokers spend a lot of time getting to know merchants and traders from other nations, working out where they can make the best introductions to either ensure profit or to achieve some goal of their own.

You should’ve seen their faces!
That Navarr Thorn outbid the University of Hundstag
for a first folio print of The Crimes of Indulgence!

Brokers do not just concentrate on physical goods. A broker might know of someone with a valuable skill and put them in touch with a patron, for example, or put a band of mercenaries in contact with a marcher lord who needs additional troops and is prepared to pay for them. Sensible traders use the brokers to perform legwork for them, and pay them a premium wage based on the results they deliver.

Many brokers are motivated by their belief in the Great Dance rather than monetary gain. They have a free choice of who to put in touch with who, and how they arrange the meeting, and some use this to discreetly ensure that a struggling business gets the work it needs to stay afloat, or that a greedy Earl is put in touch with an equally greedy blacksmith who will charge top rates for their work.