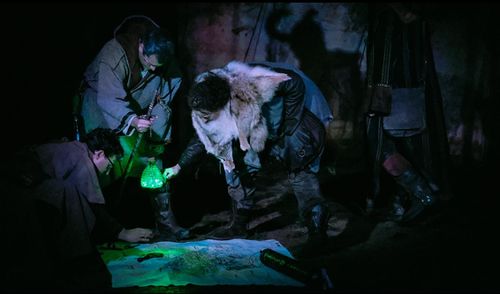 The magic of night is subtle, intuitive, deceptive and secretive. It is never direct, and never the same twice - it is the essence of transformation and mystery. Where Day magic is focused by the conscious mind, Night magic lives in the unconscious and the subconscious. There is a dream-like quality to Night, and it defies easy categorization or definition.

Night magic excels at concealment. While no other realm can match its power to obfuscate or deceive, the magic of Night is often directly opposed by the revelatory magic of the realm of Day. A paradox of Night is that it does not make things invisible - the magic itself can always be detected, and while it may conceal the composition and exact location of a band of soldiers an observer will still be able to see the swirling magical mists that surround them.

What Night can hide, it can also uncover. The divinatory powers of Night magic are always somewhat dreamlike in nature, however, being full of symbols and metaphors that must be interpreted - unlike Day magic, which deals with cold facts. This is also the realm that most exemplifies the power of transformation, and excels at transforming thoughts and ideas even more than it does solid objects. Magicians who make extensive use of Night magic often talk about its elusive, mercurial nature. The magic resists being used, and magicians variously describe the experience as needing to hunt it, coerce it, lure it or tease it out before a ritual can be completed. The magic itself is difficult to pin down - powerful rituals often leave the magicians feeling dazed or in some cases even cause phantasmagoric hallucinations.

It is the most powerful realm because it transforms everything it touches - even the act of divining can uncover truths that prompt unexpected changes in the attitudes or beliefs of the magician wielding it. There is a danger to Night magic. It can lead to selfishness and introspection, and encourage the magician to spend more time considering their own thoughts than the world around them. It encourages the magician to explore ever inward, forsaking the outside world in pursuit of understanding that is difficult or impossible for others to understand.

The Night Realm delights in secrets and mysteries, it loves riddles and puzzles, and it resonates strongly with any ritual that obfuscates things, making them harder to fathom. The realm is perfectly suited for concealing or disguising the true nature of things; it cannot make things invisible, but it can cloak them with magic to provide a screen that baffles the senses. Night magic is uniquely capable of thwarting divinations; it is possible to ward almost anything against divination, especially those of the Day Realm. This resonance can be used in many subtle ways, such as concealing memories from someone.

Night magic does not hide what it has done. Magicians can easily detect the presence of the Night Realm when it is used to baffle their divinations, but the more powerful the concealing Night ritual, the harder it is to pierce the resulting shroud.

Examples Cast Off The Chain of Memory, Infant Starts with a Blank Slate, Incantation's Mystic Mask, Masque of the Blinded Weaver, Secrets for the Shadow Courier, Secrets of the Empty Heart, Riddle Hides the Reward, The Cuckoo's Egg, Drawing the Penumbral Veil, Shroud of Mist and Shadow, and Vale of Shadows.

Things are fluid in the Night Realm, constantly changing and in flux. This powerful resonance can be used in many different Night rituals that seek to transform objects and even living beings. Although Night magic may appear chaotic, the truth is that such transformations follow subtle but definite rules - living things in particular cannot be transformed against their will or against their nature.

Night rarely allows anything to be turned into anything - there will often be a pattern than must be adhered to, or a ritual will turn one specific thing into another specific thing. For instance, Night magic can't turn an apple into an elephant, but the more similar the essential qualities of two things are, the easier the transformation from one to the other can be. The essential qualities that Night concerns itself with are the ideals and "inner" qualities of something. A brave knight has more in common with a lion than with a cowardly merchant. The physical similarities are usually irrelevant to Night.

Some transformations are linked to deceptions or tricks. The idea of substitution, of exchanging one thing for another similar thing, is linked to the resonance of transformation in the Night Realm.

Examples: Thief's Arcane Gambit, The Eight-spoked Wheel, The Retrograde Wheel, The Twilight Masquerade, Conclave of Trees and Shadow, Align the Celestial Net, Transmogrification of the Soul's Echo, Dripping Echoes of the Fen, Distill the Serpent's Stone.

Like Day magic, Night magic includes many powerful divination rituals. But where Day concentrates on quantities, facts, and numbers, the divinations of Night magic are only concerned with intangible elements - emotions, feelings, and ideas are all susceptible to Night magic. Such divinations are valuable but always uncertain - the answers often come in the form of riddles, puzzles, or visions and require wisdom and experience to interpret them.

The Night Realm delights in conjecture and speculation, the more imaginative and original the better. These inferences are not mere guesses; the Realm excels at bringing together disparate information allowing magicians rare insights. Skilled mages can use Night magic to make predictions and examine mysteries. Forest resources in particular can benefit from these kind of auguries, enhancing their production.

Examples Signs and Portents, Verdant Bounty of the Twilight Bayou, Whispering Shadow Courtiers, Shadowed Glass of Sung, and Wondrous Forests of the Night.

The Night Realm prizes imagination and creativity, especially thoughts and ideas dredged up from the subconscious mind. Ideas are not weighed by their practicality or usefulness but by their originality and inherent aesthetic qualities. It is easy to criticize the unworldly nature of the Night Realm, but no other realm possesses this essential resonance, the capacity to create something genuinely new.

Examples Secrets of Skillful Artifice and Sift the Dreamscape's Sands.

The Night revels in powerful emotions and passions. It shares some of the intensity and wild energy of the Spring Realm, but it is the emotions themselves that resonate within the Night Realm. Rituals of the realm can enhance sensations and feelings but they are not without risk - the passions unleashed can be so intense they lead to madness.

Examples Freedom of the Soul, The Chamber of Delights, Embrace the Living Flame, Unfettered Anarchy, and Still Waters, Running Deep.

Night transforms and conceals but abhors destruction. Destroying something makes creation less diverse, and reduces possibilities. Night even balks at killing people, especially wholesale slaughter. While the ability to strike from concealment can be deadly, it is dissonant to use night magic to directly harm someone physically.

The Night Realm seems to regard clarity as a flaw, an imperfection that must be remedied. It always presents information in a way that needs interpretation, striving to be clever or subtle even when that's detrimental to the broader goals. Attempts to gain clarity and precision using the Night Realm are doomed to failure.

The Night Realm is a realm of smoke and shadows; it excels at transforming and concealing things, but this emphasis on the intangible makes it difficult to use Night magic to create rituals that strengthen or empower the target. There is an insubstantial quality to the Night Realm that makes it dissonant for rituals that attempt to grant increased physical power.

Like the Spring Realm, there is an unpredictable tendency to Night magic that is difficult to avoid. It is as if the Realm itself takes delight in surprising those who use it, making it difficult to entirely predict what the outcome will be. Rituals that require order and rigour are often dissonant with the Night Realm because of this essential flaw.

Night encourages individuality - it resolutely puts individual needs ahead of collective needs. Night magic never encourages people to obey or respect anyone else, to abide by hierarchies or regimented rules, or to all act in a certain way. Attempts to empower a group of mortals with Night magic always tends to result in a significant loss of discipline, because they cause an inevitable increase in passion. Passion is deeply personal in nature; while some soldiers might be motivated by a passionate patriotism or hatred of the enemy, just as many are actually passionate about going home (and desert) or nurture a deep dislike for an unpopular captain - unleashing those passions with Night magic can end in disaster.

As a result, there are only a few Night magic rituals that are useful in war. Not only are rituals that try to enhance discipline impossible with Night magic, this dissonance actively ruins attempts to use Night magic to make an army or military unit stronger.

Although it is possible for a skilled Night mage to profit from their rituals, the idea of profit, particularly notions of commerce, profits and loss, ledgers and coins, are strongly dissonant in Night. In part this reflects the realm's disinterest in facts and figures, but the lack of discipline and predictability are also factors. Rituals that attempt to enhance the produce of coin are impossible in the Night Realm.

While Night magic can help deal with negative thoughts or mental afflictions, it is useless for healing wounds or regrowing limbs. The body is just a vessel for containing the spirit; a way to provide sensory input for the consciousness.

Night magic loves comforts, but it finds objects boring. Night magic often works through food or drink - transient pleasures that are consumed and enjoyed then gone for good. It can't mend broken objects, nor grant persistent objects special properties in the way Autumn might. This tendency is easy to see in the actions of the Eternal Murit - that creature cares about the art and inspiration that goes into making something much more than it does the item itself, and quickly grows tired of its creations and moves on to something else. Night magic cannot mend items, for example.