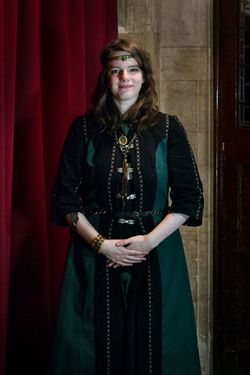 An opaline coat increases the magical potential of the wearer.

An opaline coat takes its name from the opal gemstone, favoured by jewelers throughout the Empire for the incredible range of colour in which it is found. Each coat incorporates a small amount of dragonbone, often used to provide extra shape to key areas, or worked into the fabric as delicate beading. Freeborn tailors make opaline coats that shimmer in the sunlight, weaving threads of silver, gold and mithril into the fabric and choosing beautiful pieces of semi-precious stone to create fastenings and buttons. The magicians of League often compete with one another as to who can acquire the most splendid opaline coat, looking down on rivals who favour more mundane jackets, and being subtly enraged by those few Mountebanks capable of acquiring one for themselves. The street magicians of the League tend to favour a shorter cut that they call an iridescent jacket, modeled after the Freeborn style.

The Suaq and Varushkan magicians who make use of the opaline coat prefer a more tasteful arrangement that has become increasingly popular even in the south - a coat of hard-wearing wool, dyed a single vibrant colour, with a lining of shimmering, iridescent shades. With the coat closed, it is difficult to tell it is anything other than a finely made, warm garment; when it is opened, its true beauty becomes apparent.

“Just one more of your uncle's sheep”, Ilena had called him, “always willing to do what you're told.”

"If only", he'd often thought to himself, "There were any bloody truth to that assessment of sheep." In his considerable experience the damn-fool things seemed to take a perverse delight in finding new and interesting ways to stray off and get into trouble. Today was no exception; here he was crunching through drifts of snow, doing his best to follow the scattered tracks of a pregnant ewe that had spooked over nothing at all. Right before sundown, of course, so he'd have a cold dark struggle getting the damn thing back to the walls of the farm. And if she lost the lamb or came back injured, oh, there'd be hell to pay from uncle Dushkov.

Squinting in the fading light, he continued to climb higher on the hillside, the sparse pines on the ridge above him silhouetting themselves like crooked fingers. In the distance he heard bleating, and for a moment he was relieved to finally be drawing closer, but then he realised it was the panicked cries of an animal in distress. Drawing his hatchet, he flattened down and began to creep forward as quietly as he could.

His worst fears were realised as he came upon a scene that turned his blood to water; something hunched and manlike, but covered with long, fiery red hair was leaning over the carcass of the ewe. Steam poured into the evening sky as bones snapped and blood splattered, followed by the awful noise of hot, wet organs being gorged down. Without even thinking, he hefted his hatchet and leapt forward. Eyes like red-blazing coals turned to fix on him as the beast heard him coming, and a terrible howl shook the hillside...

Ilena looked up in surprise at the well-dressed young Warden entered the dingy beerhall. The village was too small to get many travellers, and none as dashing as this one. That magnificent coat of lambswool, dyed a rich burgundy and buttoned with dragonbone, was a thing of wonder. She preened for a second before asking in her most suggestive tones what his pleasure might be. It was only a moment later as the man smiled that she realised it was young Gregor, that foolish shepherd boy who'd been so sweet on her, before he disappeared.

He opened his coat to show off the exquisite lining – a rich, red pelt that seemed to glow with an almost unearthly lustre. He laughed, “You once called me a sheep, Ilena, and maybe I am, but now at least I'm a sheep in Wolf's clothing...”
Retrieved from "https://www.profounddecisions.co.uk/mediawiki-public/index.php?title=Opaline_Coat&oldid=52526"