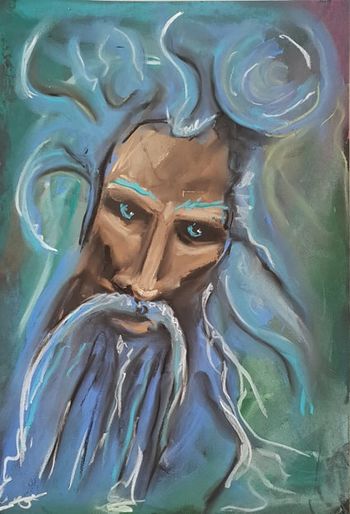 Ossegrahn is the bringer of healing and gentle rain.

Ossegrahn is not especially familiar to Imperial magicians, but it seems that at one point he was reasonably well known. Following his recent reappearance during the Autumn Equinox 383YE, there has been some effort made to uncover references to him in early historical documents. So far the number of names associated with him is surprisingly large: Lord Rain (believed to be a Jarmish sobriquet) is also known as Coomarta of the Rains, Cupbearer, Brother Harvest, Bogfearthan, Father Tarn, Llomon, Elder Fossegrim, Willowbraid, Beckburn, and Greenfount. For now it appears the eternal prefers to be known as Ossegrahn by the Imperials who have spoken to his heralds, though he seems to have no objection to any of the other titles so far uncovered.

Uncertain; no Imperial magician will admit to having spoken to Ossegrahn in the last four centuries. From some references in obscure texts and discussion with heralds, it seems that Ossegrahn may in some way be a large body of fresh water, perhaps a lake or river. According to one unsubstantiated piece of writing in a pre-Imperial treatise on Spring eternals, a creature that seems to be Ossegrahn is said to be incarnated in all fresh water in the Spring realm, even going so far as to claim that the rain itself is part of Ossegrahn's body. Regardless of the facts, there is an obvious association between the eternal and fresh water in the same manner that Siakha is associated with salt water, or Yaw'nagrah is associated with forests.

As with other Spring eternals, Ossegrahn likely has neither gender nor sex, but where gender is defined the vast majority of names associated with him appear to be masculine in nature. According to the same sources that mention his many names, it is believed he favours the form of a human man, dressed in flowing robes of blue and green, and apparently bears a magical ewer which is always full of cool, fresh water.

As the Empire has had no dealings with Ossegrahn for nearly four centuries, it is difficult to say with any certainty what the eternal wants. From discussions with heralds it appears that Ossegrahn is intensely concerned with the preservation and proliferation of life. They claim that Ossegrahn brings healing and fertility - not the twisted fertility of Yaw'nagrah but the healthy fertility that comes from the urge to live and to create offspring. He is equally happy with the fertility of plants, animals, and people. This claim is supported by some of the older writings concerning the eternal - he apparently loves farms and wild forests equally.

Furthermore, he apparently despises the elements of the Spring realm that cause suffering - venom, poison, disease are anathema to him. As such he is apparently very much at odds with Siakha, Yaw'nagrah, and Arhallogen. He further claims to be no friend of the vallorn incidentally - its twisted fecundity that is profoundly unhealthy.

He accepts the necessity for some creatures to kill to provide themselves with sustenance, but that is the only reason he believes anyone should kill anything. According to his heralds, Ossegrahn prefers that those who seek his favour cause as little harm as possible, even to the extent of eschewing the eating of meat. While the eternal does not seem to oppose violence as such - especially when necessary to defend oneself - it favours a philosophy of least harm when doing so that appears even on a surface review to be fundamentally at odds with the practicalities of day-to-day life in the Empire.

There is an obvious further potential problem with Ossegrahn - the same problem that lead to his initial enmity in the reign of Emperor Giovanni. Ossegrahn despises magic that causes suffering, or brings sickness. He resolutely opposes Rivers Run Red - indeed it was apparently the extended period of interdiction of the ritual that was one of the things that encouraged the eternal to contact the Empire again in the first place. Following some discussion, it is clear that he also despises any magic that causes sickness - Rivers Run Red, Touch of Vile Humours, Fetid Breath of Teeming Plague, and Unending Cascade of Blood's Fire are all equally abhorrent to Brother Harvest. Indeed, one of his heralds has described Mountain Remembers Its Youth for example as the product of "an ill mind" and mused that perhaps an empire that could enshrine such a monstrous perversion of magic is not after all ready to renew its association with Bogfearthan.

While the interdiction of Rivers Run Red has apparently attracted Ossegrahn's attention, it is not the only positive step the eternal believes the Empire has taken. The creation of the Silver Chalice order - an order of healers very distinct from the Rod and Shield that previously had a strong association with healing magic - is another indication that perhaps there is a possibility for the eternal to find common ground with Imperial magicians. The eternal appears very interested in supporting the magicians who have founded this new Conclave order.

During the reign of Emperor Giovanni, Ossegrahn was declared an enemy of the Empire by the Imperial Conclave. As near as can be ascertained, this enmity was placed because Ossegrahn and his supporters were not only actively seeking to remove Rivers Run Red and similar rituals from imperial Lore, but went so far as to counter the effect of the ritual using Rivers of Life, offering healing and succour to the Empire's barbarian enemies.

During the Autumn Equinox 383YE, the Conclave chose to remove the enmity at least for the time being. It remains to be seen whether Ossegrahn and the Empire are able to find common ground, or whether he and his servants will continue to offer healing to the enemies of the Empire.

The eternal apparently has the ability to offer boons associated with healing, and is intimately interested in rituals such as Hands of Sacred Life, Rivers of Life, and Fountain of Life. He may offer magicians additional prowess with the heal, purify, and restore limb incantations, either as direct boons or in the form of physical gifts. Ossegrahn is also apparently a patron of mundane healers - physicks and apothecaries as well as their more magical counterparts. Indeed, according to one of his heralds, Ossegrahn is capable of imbuing any fresh water with powerful life-giving energy equivalent to the most potent healing available to herbalists. It is likely that his boons will often involve water in some fashion.

It is likely given his avowed interest in propagating life that Lord Rain can also offer boons related to magic such as Fan the Flame of New Life or Midwife's Recourse, or potentially even more powerful boons over larger areas. There is some concern that, like Yaw'nagrah, Ossegrahn may seek to infuse humans with Spring magic to transform them into briars but so far the eternal has shown no sign of being so inclined. Indeed, his servants seem to believe that Ossegrahn prefers "offspring to look like their parents", preserving and nurturing life rather than viewing it as an alchemical laboratory with which to experiment.

Finally, if the heralds are to be believed, Ossegrahn favours enchantments that improve the fertility of plants and animals as well as humans and orcs - it is likely he may be able to offer boons that strengthen and improve Imperial farms.