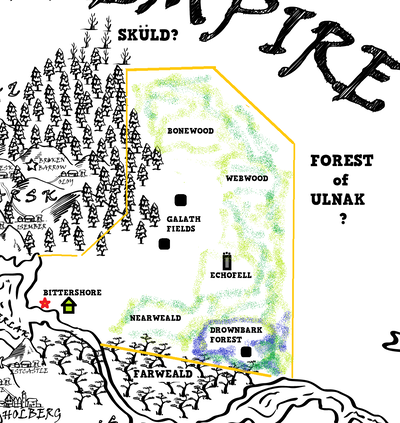 Regions of Ossium (estimation). This map is not sufficient to serve as the focus for a ritual.

On the borders of Karsk and Holberg, and across the Semmerlak from Weirwater and Semmerholm is Ossium. Previously the northernmost of the territories that make up the Mallum, now it is part of the Empire. A land of dense, twisted forests and dripping marsh it is rich in both natural resources and threats.

The invasion was preceded by the construction of the Golden Causeway, a gift from the eternal Eleonaris. The causeway allowed the armies of Dawn to cross the Semmerlak and invade. Supported by the Golden Axe of Varushka, and by a major Thule force out of Otkodov, they quickly crushed the Bone Serpent and Amber Scorpion clans, and within nine months had claimed the entire territory.

During the Winter Solstice 382YE the Senate voted to assign the territory to the nation of Varushka.

Under the town of Lomaa there lies the Crawling Depths, a mithril mine. The mine stands as a testament to Druj cruelty, to their embrace of fear and misery. With long, twisting passages too short for an adult to stand and often not wide enough to be able to turn around, the mine was used as a prison for those who worked it. With the coming of the Empire, and the Varushkan mining families that accompanied the Golden Axe, the mine has started producing mithril in a less cruel fashion.

Tower of the Scorpion

A grand tower of White Granite, surrounded by a wall topped with twisted metal razors, and standing in a large, open killing field. A network of rope bridges leads extends from wood towers that squat under the shadow of the walls.

In the season following the Autumn Equinox 382YE, imperial armies captured the Tower of the Scorpion from the Amber Scorpion clan, significantly damaging, but still claiming it.

A small but secure town located in the Galath Fields, Ketsov is inhabited predominantly by humans. It is led by a council drawing from a number of influential families, the previous rulers of the town having fled east with the Druj. From the first instances of communication between imperial soldiers and the townsfolk of Ketsov they showed a clear understanding of virtue.

A shambolic town on the Galath Fields, built over the Crawling Depths. The civil service has established an office here to help oversee the development of the territory.

The trods of Ossium, established by the Navarr during a brutal battle that took place in the territory during the Autumn Equinox 382YE, are only partially explored. Many of them run through dangerous, unmapped parts of the territory. It is surmised that the trods here, along with those in Karsk, help to anchor the trods - and the vallorn - of Sküld to the wider network.

Along the eastern banks of the Semmerlak, one end of the Golden Causeway is anchored here. The first region claimed by Imperial forces, it is home to the Sand Fisher clan of orcs.

The northernmost region of Ossium, Bonewood has a dire reputation for being "haunted". There is known to be a weirwood grove somewhere in its depths. The Thule claimed Bonewood during their first season of alliance with the Empire. It is also believed to be rich in beggarwood trees. As of the Summer Solstice 383YE, the Thule are building a castle here with supernatural assistance - it is likely to be entirely completed before the Autumn Equinox.

Perhaps the most fertile region of Ossium, there are many settlements here including Ketsov and Lomaa. The Crawling Depths lie beneath Lomaa.

The Webwood is a dank, almost impenetrable forest with few trails. There is believed to be a temple of some kind dedicated to the eternal Arhallogen somewhere in its depths. Traps and deadfalls are a constant danger to settlers here, along with bands of guerilla Druj orcs who occasionally issue from the Webwood to attack nearby regions.

The home of the Amber Scorpion clan of the Druj, Echofell is also the site of the Tower of the Scorpion.

A dense forest, one of the last regions of Ossium conquered.

The last region of Ossium conquered by the Empire, the Drownbark Forest is a stinking marsh covered with moss-shrouded, dripping forest. In the depths of Drownbark Forest is the town of Orieb, a settlement surrounding a sprawling and labyrinthine Druj palace.

Ossium is on the list of territories new Varushkan characters can come from. For now however, the only appropriate character backgrounds for Varushkans in Ossium are "Imperial citizen from somewhere else starting a new life as a Varushkan in Ossium" or "freed human slave who has embraced Varushkan culture". An obvious example of the latter would be someone who was freed from the Crawling Depths by the armies and introduced to Varushkan ways by the soldiers of the Golden Axe or the miners of Moresvah. It is explicitly not possible to start as a member of the Ketsov family, or similar group of Druj collaborators.

It's also of course also possible to in-character move to Ossium using the normal rules for changing territory.