To ratify the peace treaty with the Thule.
Proposed by Holberg, seconded by Hahnmark. 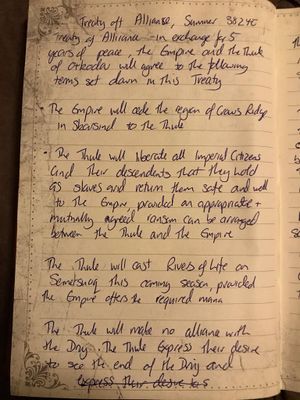 In exchange for 5 years of peace, the Empire and the Thule of Otkodov will agree to the following terms set down in this treaty.

The Empire will cede the region of Crow's Ridge in Skarsind to the Thule.

The Thule will liberate all Imperial citizens and their descendants that they hold as slaves and return them safe and well to the Empire provided an appropriate and mutually agreed ransom can be arranged between the Thule and the Empire.

The Thule will cast Rivers of Life on Sermersuaq this coming season, provided the Empire offers the required mana. 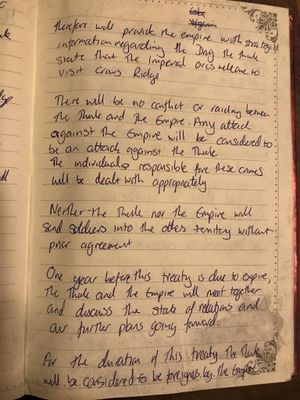 The Thule will make no alliance with the Druj. The Thule express their desire to see the end of the Druj and therefore will provide the Empire with strategic information regarding the Druj. The Thule state that the Imperial Orcs are welcome to visit Crow's Ridge.

One year before this treaty is due to expire, the Thule and the Empire will meet together and discuss the state of relations and our further plans going forward.

For the duration of this treaty the Thule will be considered foreigners by the Empire.

Note 1: The Thule wish to clarify that this section refers to attacks on the Empire by the Thule and vice versa. It is not a pact of mutal defence against a third party.

Note 2: The Thule clarify that despite the use of the word "territory" they are free to send their soldiers into the Silver Peaks, Krevsaty, and Crow's Ridge, and any other region they may control within an Imperial territory.