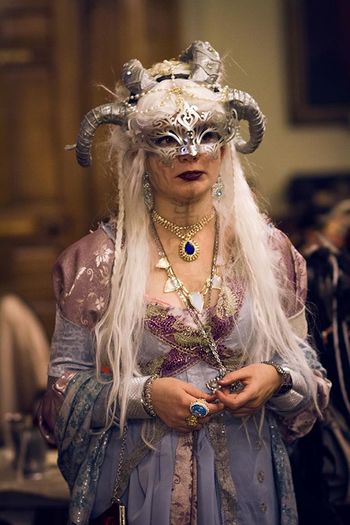 Each ring bears a story.

In the League, people wear rings to demonstrate their allegiances, wearing one ring for each major loyalty they owe. The giving of rings is an invitation to commit oneself to the giver's allegiance, and the casting away of rings is a clear sign that an association is over. It is rare for members of a guild to wear matched rings, though that in itself would tell you something about them. Each ring worn by a citizen of the League has a story associated with it, and the rings often bear symbols or are made of materials that have a deep significance for the wearer or the target of the allegiance.

Sharing the true story of a ring with someone – explaining the correspondences and symbols – is a sign of trust and confidence. More than a few openly wear rings that represent hidden allegiances. If you think you know who a citizen of the League is loyal to, but they are wearing more rings than you can trace loyalties, it may be that they have a hidden loyalty, or that they felt a loyalty to someone or something in the past (an ex-lover, for example, or the memory of a dead friend).

Stealing rings is a dreadful insult – it implies an attempt to sever the target from their allegiances and loyalties. While it is common for a dying citizen of the League to pass one or more rings to friends and family as heirlooms, they are often burned along with the corpses. The wealthiest citizens of the League expect to be buried with their rings, and robbing the rings of the dead is said to bring about a dreadful curse. There are plenty of folk tales of “cursed rings” taken from the dead - either stolen from the tombs of the wealthy, taken from the fingers of a corpse before it is cremated, or stolen from a victim before their corpse is properly cold.

The five ring piece shows a hand wearing five rings, and it is widely believed to represent the hand of Stratocanthus, the first Master of the Imperial Mint. According to legend his rings represented his loyalty to his guild, the twin-city of Tassato, the Nation of the League, the Empire and, depending on who one listens to, his wife or his mistress. Only one of the rings was enchanted, and there is a lot of debate among historians as to which of the rings bore the enchantment, as Stratocanthus is known to have commented in an unguarded moment that it was “the most important one.”