Sceptre of the Necropolis 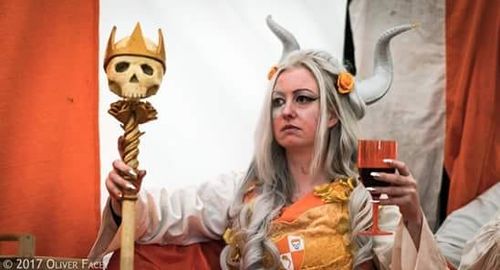 With a touch of the sceptre of the necropolis a foe can be crippled or even killed.

The earliest record of these deadly items has them constructed by the Highborn magisters. They saw some use in the early battles with the orcs, and were occasionally used as tools of assassination during the worst periods of patrician rule over the pre-Imperial nation. Today they are generally considered to be deadly but effective implements for pinpoint removal of enemies. If their deathly magic is released properly, the target is potentially removed permanently from the battlefield. If the magic goes awry, however, the wielder may be left dangerously overextended.

Of some interest to historians is that these rods are termed sceptres of the necropolis in early works that predate the destruction of the Highborn city of Pharos. No adequate explanation has been found to date.

The sentinel was quick, but the orcs were too many. Cut and thrust, parry and riposte; each flash of his blade drew blood from the Barbarians, but skilled as he was, the outcome was inevitable. Sibylla had known from the outset, from the moment the four huge orcs had broken through the tree-line, from the first gutteral war cry that chilled her blood and froze her feet to the spot.

"Run!" Camillus shouted again; a second orc fell in a spray of gore, its head half severed as its hulking frame slumped to the ground. The diminutive librarian took a hesitant step backwards, unable to tear her eyes away from the battle. The sentinel pulled his blade free, still moving in a measured, elegant dance against the barbarian's relentless savagery, but tiring now, even she could see that. Another parry, another cut, and another death; Sibylla allowed herself a second's hope. The final orc, larger and paler-skinned than the rest, clad in battered and blackened plate armour, took a step forward, and she realised too late that it had merely been biding its time, allowing Camillus to expend his energies on its disposible companions. It bared its teeth - half a snarl and half a leer of mockery - and came at him in earnest, the axe in each hand hammering down towards the sentinel with monstrous speed. Wrong-footed at last, he stepped back, taking his sword into two hands to deflect each strike, until with sick horror, Sibylla watched as the barbarian slowed for a second, feinted low, then with a roar buried an axe in the sentinel's skull, and drove him lifeless to the ground.

Then it raised its head, and saw her. Suddenly her paralysis broke, and she was running through the forest, brambles whipping against her face and hands, the silks of her robes tearing on thorn and vine as she willed her scholar's legs to carry her on. She could hear the orc's heavy footfall behind her - slow, inexorable, and gaining on her with every rasping breath she drew. And ahead of her - never a more welcome sight in all her days - she could finally see the imperial road, the guard post, the distant uniformed figures in purple and gold, if only she could outpace the orc, if only -

Something caught her across the ankle, and suddenly she was staring at the sky, winded and sprawled across a nest of tree roots, her foot trapped under a fallen branch. The orc made its way effortlessly through the undergrowth towards her; she noticed with a strange, sick horror that its belt was strung with human scalps, one tangled with the shreds of a gold and crystal hairnet. She scrabbled furiously away from it, but her ankle was trapped fast; she could smell the carrion on its breath as it put its face close to hers, examining her like a strange specimen that had fallen into its net. It placed first one axe, then the other through its belt, drawing instead a long, curved knife, the hilt encrusted with layers of gore, but the blade still gleaming and wickedly sharp. Silently, her eyes locked with its, Sibylla's hand crept to her belt, a last ditch plan forming in her mind, fingers questing until they found the rounded jade hilt of the rod hanging by her hip. Her lips moved, hissing out the incantation as the orc's eyes narrowed, the blade rising in its hand as its other fist closed in her hair, snapping her head back and baring her scalp for the knife's caress.

With the last of her courage, she drew the rod in a single movement, and thrust it blindly towards the orc's armoured chest. She felt the skinning knife bite into her hairline, the orc grunt in what sounded like surprise, then a spreading warmth up her hand and wrist. When she opened her eyes, it was the blood she saw first, staining the skin of her hand, soaking her sleeve, and the rod all but invisible where the spell had driven it hilt-deep into the orc's chest. For a second the two of them were motionless, poised in a grisly tableau, then the orc fell forward and she slumped back on the ground - exhausted, horrified, but above all, alive.