The information below relates to ongoing controversies facing the Synod and the Imperial faith. Some have been used as a foundation for inquisitions and condemnations of religious crimes, or as the basis for attempts to add, remove or amend the doctrines of the faith, which would make explicit what is, or is not, heresy.

Although the Doctrine of Seven is accepted as orthodox, there are many disputes and schisms amongst theologians. Some of the doctrines are disputed. Elsewhere, the Synod has sought to create a doctrine but been unable to build a consensus amongst the clergy. 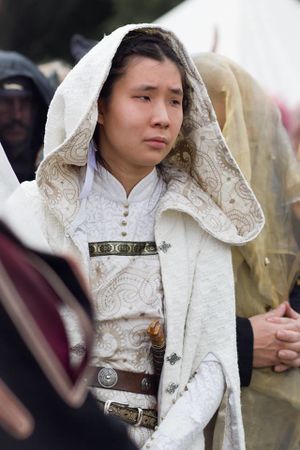 In 379 YE, Yael of Felix's Watch, a Highborn theologian, returned from a true liao vision. An account of the vision was recorded by the Seer of the Gateway and became public knowledge as part of Volume 3 of Echos of the Labyrinth. Her statements were supported by her guide priest, Isaac of Sarvos - a close friend, fellow scholar, and member of the Courage Assembly. She claimed to be the First Empress reborn, possessed of a Paragon soul returned from a place beyond the Labyrinth, which she called the "Land Without Tears", a golden land without pain and suffering.

Both these beliefs were considered highly contentious in some quarters. After receiving initial support in the Synod, opinion began to turn against Yael. By the summer of 381 YE, two years after her original vision, only the Highborn Assembly still stood by what she called her 'revelation', although she had pockets of support across the Empire. The General Assembly condemned her of heresy with a greater majority - she pled guilty, asked no clemency, and was executed by her Exarch's own hand.

OOC Note: The process of the Yaelian Schism is covered in a series of Winds of Fortune, including The Courageous Priest (Spring 380YE), Rebirth in Reikos (Summer 380YE), Pilgrimage (Autumn 380YE), Matter of faith (Winter 380YE), A spiritual prism (Spring 381YE), Death is not the end (Summer 381YE), and Unable to see (Autumn 381YE).

It is widely accepted that the First Empress was a paragon. However, to date, there has been no consensus as to which Virtue she followed to escape the Labyrinth of Ages. There are priests and pilgrims from each of the seven paths who claim that the weight of evidence supports that the First Empress was a paragon of their favoured path. There have been several attempts to identify archaeological evidence to settle this debate once and for all.

Unitarians dispute the Doctrine of Seven, claiming that the Seven Paths are One Path. Unitarians point to the First Empress as a clear example of a Paragon of All Virtue. However, Investigative Theologians point to the inability of humans to Dedicate to two Virtues without loss of focus and that the consensus is that each Paragon followed a single path.

Recollectionists dispute the Doctrine of Reincarnation. They maintain that the visions granted by pure liao are not past lives, but are ancestral memories. That is, the vision is of the person’s distant genealogical relative rather than of the individual’s spirit reborn. One unproven byproduct of this claim is that exemplars would be reborn within family lines.

Humanists dispute the Doctrine of Reincarnation. They interpret pure liao visions as being from a pool of racial memories stored within human nature. This pool of natural memory is available to all humans and that there need not be a direct link between the vision and the one experiencing it.

Transcendentalists dispute the Doctrine of Reincarnation by claiming that there is no Labyrinth of Ages. The human spirit, upon death, transcends the mortal and mundane to merge with other human spirits who have died. This merging of spirits is believed to form some kind of Great Spirit, a psychic entity that exists outside the mortal realm. They claim liao puts a person in contact with this Great Spirit and grants access to its store of memories and knowledge. Some claim that this psychic entity may even be the Creator Spirit itself, though this view is arguably Idolatry.

Atuman of Highguard, one of the legendary Navigators who steered the Highborn to this land, was held for several generations to be a paragon of Ambition. However, this claim was undermined by Aldones di Sarvos, one of the founders of the League, who described having a past life vision which revealed that he was Atuman reborn. Aldones later went on to be recognised as a paragon of Ambition. Some Highborn priests have claimed that Aldones lied about the vision to deny Atuman's paragonhood and spite Highguard, however League Bishops strongly decry this smear on Aldones' legacy. There have been several attempts to settle this controversy through archaeological or visionary means.

In life, Abraxus was a respected Pilgrim of the path of Wisdom and held by some to be an exemplar. However, he became a controversial figure when he claimed he had learned how to use pure liao to not only contact his past lives, but those he was yet to live. A large number of cryptic and prophetic scrolls are attributed to Abraxus . These are scattered and still highly sought after today.

An Orc named Bloodhammer Krydak once famously claimed to be the reincarnation of Tian, paragon of Ambition. He was decried as a Blasphemer, for denying Tian's paragonhood and exalting his own inhumanity, but many who met Krydac found his words compelling. The Synod were pressured to meet with Krydak to evaluate his claim, but he was assassinated before this happened. Krydak remains a controversial figure to this day.

Scourgers dispute the Doctrine of Human Destiny and claim that the non-human races, such as Orcs, may be reincarnations of human spirits, but who have been warped and deformed by lack of Virtue and too long lost and wandering in the Labyrinth of Ages. They believe that those who sin greatly in life and lack virtue risk rebirth in an accursed and damned form.

Lucidianism arose in the spires of Urizen and believe that the creation of virtuous auras, through means such as consecration and anointing, actually interfere with the objective and rational pursuit of a Virtue. Some Lucidians go so far as to claim that such auras represent a form of Idolatry and are as inclined to exorcise a virtuous aura as a malign spiritual presence. This opposition to manifestations of Virtue has led other Priests, especially Highborn Wayfarers, to accuse Lucidians of Blasphemy against the Virtues. To date, the Lucidians remain a minority in the Synod.

There have been several attempts by various Synods to craft a Doctrine relating to the Eternals and their Realms, but each has failed to build a consensus. The biggest divide is along Inclusionist and Exclusionist lines. The Inclusionists hold that the Eternal Realms are part of the wider Creation and that contact with Eternals is inevitable and unavoidable, and must be carefully managed, not unlike a plague or forest fire. The Exclusionists hold that the Eternal Realms exist outside of the true Creation and are akin to parasites attached to the mortal world. They claim humanity will never be truly free to realise its own destiny until all ties are severed.

Tales of the earliest paragons contain some miraculous claims, such as Tian taking fire from the sun, and Kord cutting down an entire forest with a single axe. Some Priests maintain these tales are literally true and speak of the full potential of human destiny, whilst others maintain that the tales have grown in the telling whilst still providing insight into the ingenious application of virtue for prospering humanity.

When the First Empress sought the creation of the Egregores, she consulted the Synod. As Egregores are the manifestation of human consciousness and culture, they were deemed as being human magic, and so the Synod were entirely in favour. It was further recognised that Egregores owe their existence and form to the human nations and were thus subordinate to humans. Finally, it was concluded that as the Citizens embraced Virtue, so too the Egregores would mirror this and display virtue. The only dissent came from Exclusionists who hold that once the Eternal Realms are banished, so too must the Egregores depart.

Purifiers dispute the Doctrine of Seven. There have been several Purification Sects across Imperial History, each of whom have sought to have all Citizens of a Nation Dedicate to a single Virtue. Included amongst various rationales has been a desire to see an Egregore of a Nation also be a magical Avatar of a Virtue as it reflects the Dedication of the Nation. Historically, Purification Sects have attained brief popularity before either imploding or losing momentum.

Vitalists believe that the qualities that aid one in the Labyrinth of Ages are not purely spiritual ones, and that physical qualities are important too. Part of the argument for this is that liao itself is a substance that is consumed, therefore what is consumed can have an impact on the soul. Vitalists do not always agree which physical qualities are the special ones. There are a number of variant regimens - a mixture of diets and/or excerises - which are held by those who follow them to aid the passage of the spirit through the Labyrinth of Ages. Vitalism only becomes blasphemy at the point that the practices are held as an alternative to living a virtuous life, instead of as a supplement to.

Excessionists claim that too much of a Virtue can be as bad as too little. This conflicts with the Orthodox teaching that the Virtues are pure and the key to human destiny. The charge is levelled against Excessionists that they are making excuses for their own shortcomings and failings in embracing the virtues in their strongest and purest senses.

Realmism is the belief that the Labyrinth of Ages is actually a Realm akin to Night or Day, albeit one that is not accessible via the Hall of Worlds in any known manner. Some have even expected that paragons actually go on to become Eternals of this spiritual realm. In response to Realmists, the Synod created the Doctrine of the Labyrinth which refutes this teaching.